How similar is Trump to Caligula? This historian has some surprising answers 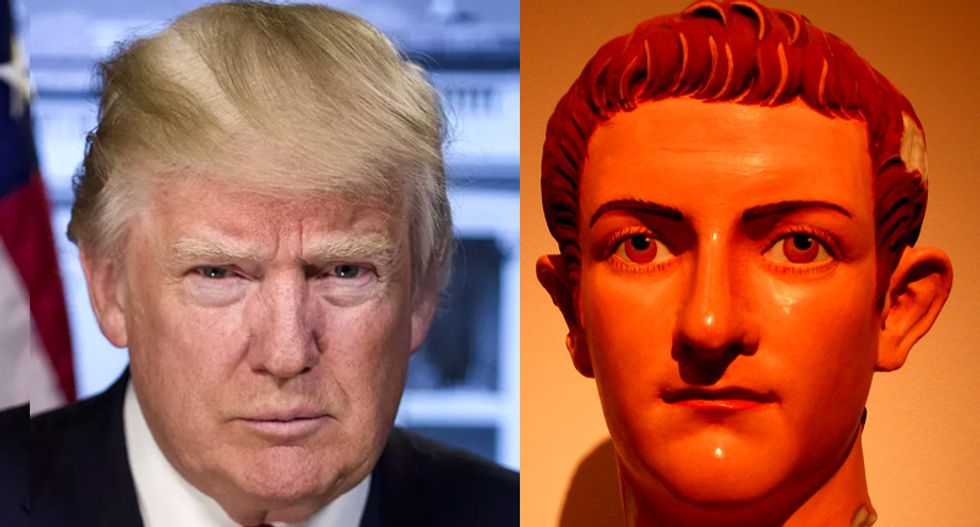 Even before Donald Trump was elected president of the United States he was being compared to Caligula, third emperor of Rome. Following Mr. Trump’s election, comparisons flowed thick and fast. But, is it fair to compare the unpredictable, ultimately chaotic reign and questionable mental state of Caligula with the administration and personality of the forty- fifth president of the United States? Do comparisons stand up to scrutiny?

Well, both men ruled/rule the largest military and economic powers of their age. Caligula emptied the treasury with his extravagances. Trump presides over a ballooning U.S. national debt. Neither man had served in the military they ended up commanding.

Both had few friends growing up. Both had multiple wives. Both men had successful, wealthy fathers. The parents of both Caligula and Trump all died before their son rose to the highest office in the land.

Both men rid themselves of senior advisers who restrained them. Both were/are sports lovers, building their own sporting facilities in furtherance of their passions. In Caligula’s case it was chariot racing and hippodromes. For Trump, it’s been golf and golf courses.

Then there are the obvious differences. Caligula was twenty-four years old when he came to power. Trump was seventy on taking the top job. Caligula had absolute power with no specified end date. Unless the system is changed, Trump can expect a maximum of eight years in power. Trump has made numerous outrageous claims. Caligula made just one—that he and his sister Drusilla were gods.

Caligula was well-read and an accomplished public speaker with a lively if barbed wit. Trump’s wit can be similarly stinging. But he comes across as an inarticulate man, exhibiting an obvious discomfort with formal speeches and producing a nervous sniff when out of his comfort zone.

It’s instructive to look at the handshakes of both. The handshake as a form of greeting went well back before the foundation of Rome. Originally, it demonstrated that neither party held a sword in the right hand. If a Roman respected the other party, he would “yield the upper hand” in a handshake, offering his hand palm up.

Caligula yielded the upper hand to few men other than his best friend Herod Agrippa, grandson of King Herod the Great. Donald Trump sometimes yields the upper hand. But is it through respect, or diffidence?

At his first public meeting as president with Russia’s president Vladimir Putin at the 2017 G20 summit in Germany, Trump offered his hand first, palm up, yielding the upper hand to Putin. He did the same when meeting France’s president Emanuel Macron that same year. In contrast, Trump offered female leaders Germany’s chancellor Angela Merkel and Britain’s prime minister Theresa May a straight up and down handshake.

Through late 2018, Trump was photographed yielding the upper hand to Japan’s Prime Minister Shinzo Abe and Australian Prime Minister Scott Morrison. In October, he did the same with America’s then ambassador to the United Nations, Nikki Haley, in the Oval Office.

In terms of policy, Trump and Caligula are poles apart. Some of Caligula’s public infrastructure policies were ambitiously innovative and progressive, if expensive. While Trump has always painted himself as entrepreneurial, his policies have been regressive – a blanket program of retreat. Retreat from the Paris Climate Accord. Retreat from free trade. Retreat from government regulatory control of the economy and the environment. Retreat from military boots on the ground in Syria and Afghanistan.

As US Secretary of State Mike Pompeo said in January, “When America retreats, chaos often follows.” From the available evidence, it seems Caligula did suffer from a mental illness. Trump’s mental stability is, in the words of an ancient Roman saying, still before the judge.

In the end, it wasn’t external foes who caused Caligula’s downfall. Caligula was brought down by a dread among his inner circle of being next as he eliminated many around him. Loyalty and friendship were no guarantee of survival. Similarly, it’s been said that President Trump turns on a dime when it comes to friends. In the case of Caligula’s friends, self-preservation eventually made the most loyal the most lethal.

When Caligula’s reign was terminated at the point of swords wielded by assassins in his own guard, it had lasted around four years, the equivalent of a U.S. presidential term. Perhaps it will take that long for the proverbial knives to come out among the Republican old guard in Washington today. As was the case in AD 41, it will probably not be a pretty sight.

STEPHEN DANDO-COLLINS is an historian and noted authority on the military of ancient Rome; his 42nd book, CALIGULA, The Mad Emperor of Rome, will be published by Turner Publishing on July 30.