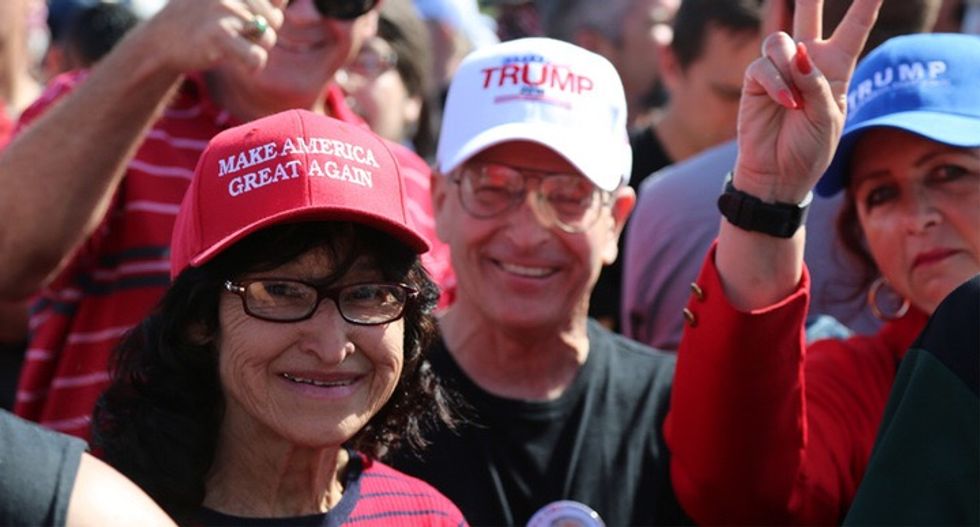 Donald Trump supporters in line to hear his speech at a rally in 2016. (mikeledray / Shutterstock.com)

Earlier this year, President Donald Trump gave an interview to Breitbart News, boasting about the "toughness" of his supporters.

Critics worried that the President was sending coded signals that might inspire violence among his supporters. A week later, nearly 50 people died after a shooter attacked two Mosques in New Zealand.

Raw Story spoke with Harper West, a clinical psychologist who studies emotional problems as adaptive responses to fear, trauma, and lack of secure attachment, about the odd relationship between Donald Trump and his supporters. West is an expert in shame, domestic violence, and in surviving narcissistic abuse by parents and partners. Her book, Pack Leader Psychology, won the Ben Franklin Award for Psychology.

She contributed her understanding of the abuser-abused relationship to “The Dangerous Case of Donald Trump: 27 Psychiatrists and Mental Health Professionals Assess a President,” edited by Bandy X. Lee.

Tana Ganeva: President Trump's approval rating among Republicans remains at close to 90 percent. Yet, his budget proposal and many of his priorities seem to undermine a lot of their interests. What accounts for this?

Harper West: The illogical support for Trump among those who are being harmed by his policies actually makes sense from a psychological point of view. In my chapter in book, “The Dangerous Case of Donald Trump: 27 Psychiatrists and Mental Health Professionals Assess a President,” I compare Trump to an abusive personality. Abusers dominate and take advantage of their victims, who may be completely unaware of the abuse. Many Trump supporters seem clueless to the harm he is causing them.

In addition, abusive and authoritarian personalities create an effect not much unlike a cult, with some people becoming spellbound and submissive to a charismatic leader. Cult members often act against their self-interest, such as by giving away their money, property, children, or rights to a cult leader. In the same way, abused spouses often are forced to quit their jobs, relinquish financial security, or give up contact with family and friends — behaviors that are not in their best interest.

Much has been written about Trump and the GOP stoking fear in voters — mainly fear of supposedly dangerous immigrants and minority groups. Provoking fear is something all authoritarian leaders do because they know how effective it is at securing fervent supporters. When our brains are hijacked by fear, our ability to think rationally goes out the window. We become self-absorbed with short-term physical or emotional survival, a way of thinking that does not lend itself to comprehending complex, long-term problems. Fear makes us adopt cognitive short-cuts, such as slogans like “Build the wall” and hinders us from considering more nuanced solutions to problems.

Tana Ganeva: The Trump administration continues to be beset by scandals, with multiple Trump associates getting prison time for crimes they committed while closely working with Trump. Yet that doesn't seem to touch his popularity among the base either. Why?

Harper West: Some people who follow Trump are the submissive types who are accustomed to complying and obeying a dominant or abusive authority figure. This type of person may actually be blind to Trump’s flaws because he replicates an abusive personality they experienced in childhood and this relationship pattern feels normal, even safe.

Another type of person who follows Trump is one who has a similar domineering personality.

Trump is an extreme example of what I call an “other-blamer”. These types of people, due to their childhood attachment traumas, have low self-worth and are overly sensitive to shaming experiences, such as being criticized, making mistakes, failing, or being “less than” in any way. To manage shame they learned to blame-shift to others to preserve their fragile psyches. This shows up in an inability to be accountable and admit mistakes with equanimity. “Other-blamers” are an abusive style of personality, since offloading blame to others creates unfair and unbalanced relationships and can even reach severe levels of physical violence.

I suspect that many of Trump’s followers are also other-Blamers, perhaps not to his extreme level. Because of this, they are not blind to his obvious behavior flaws but actually idolize him for these aspects of his personality. Bullies align with other bully behaviors. Like Trump, they hate being criticized because it brings on feelings of shame that seem unbearable. They envy what he has — impunity from criticism.

For example, Trump’s tendency to “say it like it is” has a magnetic pull for “other-blamers”, because they, too, desperately wish to spout off opinions and not be challenged or questioned. They roar their approval at rallies when Trump intimidates and dominates others, because they, too, wish to abuse those who are weaker. “Other-blamers” see nothing wrong with Trump lashing out in rage or blame. In fact, they applaud it. This is exactly what they wish to do in their lives — rage and blame to feel powerful and keep criticism at bay. Trump’s supporters love it when he refuses to admit he is wrong, because they, too, do not like to be held accountable. In his entitlement, over-confidence and bloated ego, they see themselves and feel vindicated. They can relate to his fear of accountability, because they suffer from the same trait. Seeing authoritarian, immoral and unethical behavior in a successful billionaire, they conclude that these are not faults, but positive attributes.

Some of us who have written about Trump have experienced verbal abuse and even physical threats from his followers. This type of person is going to be very difficult to turn away from their true belief in Trump, because to do so they would, in essence, have to reject themselves.

Tana Ganeva: How does misinformation play into it?

Harper West: I wish I could say Trump supporters are well-informed and have a healthy relationship with the truth, but the research is clear that many get their news from a very restricted selection of sources that tend to corroborate their limited viewpoint and that tend to be very fact-averse, such as Fox News.

But from a psychological perspective, we can also understand that most of these stubborn Trump supporters continue to back him for emotional reasons that go beyond a misunderstanding of the facts on policy positions.

“Other-blamers” are in general not open-minded, which can lead them to be misinformed. To learn new information requires an admission that one does not already know that information, which can provoke feelings of inadequacy in “other-blamers”. In response, they are often unwilling to read, think deeply, or be well-informed, which by all accounts describes Trump and seems to describe many of his supporters.

Despite a lack of knowledge, they may also come across as “know-it-alls.” Trump frequently states he is “the best” in many areas where he actually lacks talent or experience, for example that he “knows more than the generals” in the military. I have had Trump supporters argue about psychology with me and they are not mental health professionals.

Once they form an opinion, “other-blamers” often cling to it stubbornly against all facts to the contrary, because to back down and admit a change of mind would feel humiliating to them. I think this stubbornness is at the core of the ongoing high approval ratings for the president, despite his blatantly immoral and likely criminal behaviors. Voters who still support Trump are doing so because to admit they bet on the wrong horse would feel too shameful for them.

To acknowledge one is wrong takes good shame tolerance and personal fortitude, which Trump and many of his supporters apparently do not have.

Tana Ganeva: For decades, the GOP has tried voter suppression tactics like ID laws to depress voting among young people, people of color, and others more likely to be impacted. In a sense, this electoral strategy denies Americans their voice. Yet, that doesn't appear to bother Trump supporters either. Why do you think this issue doesn't get more leverage?

Harper West: Voter suppression and election fraud such as that recently uncovered in the North Carolina Ninth Congressional District has been called the real theft of American democracy. Yet the Republican party has for years diverted to a red herring issue of illegal voting, which occurs so rarely as to be barely countable.

This type of divert-and-distract tactic is commonly used by abusive individuals. They will blame-shift by changing the subject to distract from the facts.

“Other-blamers” have an intense desire to win, whether it is an argument with their wife, an election, or by believing they had the biggest inauguration crowd. Their insecurity causes them to constantly compare themselves to others in hopes of proving their self-worth. To lose in any way would be a devastating and shaming emotional blow. So they may go to any lengths to win, by stuffing ballot boxes, as the candidate did in North Carolina, or, say, by traitorously colluding with a foreign enemy to steal a presidential election.

Tana Ganeva: Trump has recently made thinly veiled comments that seem to insinuate that his supporters could resort to violence in support of him if his hold on power is challenged. Do threats of violence also fit this pattern of abusive relationships?

Harper West: Trump’s use of coded language to intimidate others is exactly what many abusive spouses use to control their victims. We also see this behavior in mob bosses and dictators. Trump stated he has the backing of “tough people,” like the police, the military, and Bikers for Trump, of all things.

Abusers often imply that they have the support of family or friends against an abused partner and suggest that she is “all alone,” weakening her resolve. Their language may not be blatantly threatening, but is subtle — “You’ll regret crossing me.” Body language is often used by abusers to signal threat, even if the words are saying something completely different — “You know I love you, honey, and would never hurt you.”

Abusers gain power and compliance by instilling fear of retribution in victims, even if no actual violence occurs. Trump may not engage in direct violence, but he incites violence in others and gains the compliance of his opponents through threats of retribution at the polls or, with these comments, through violence.