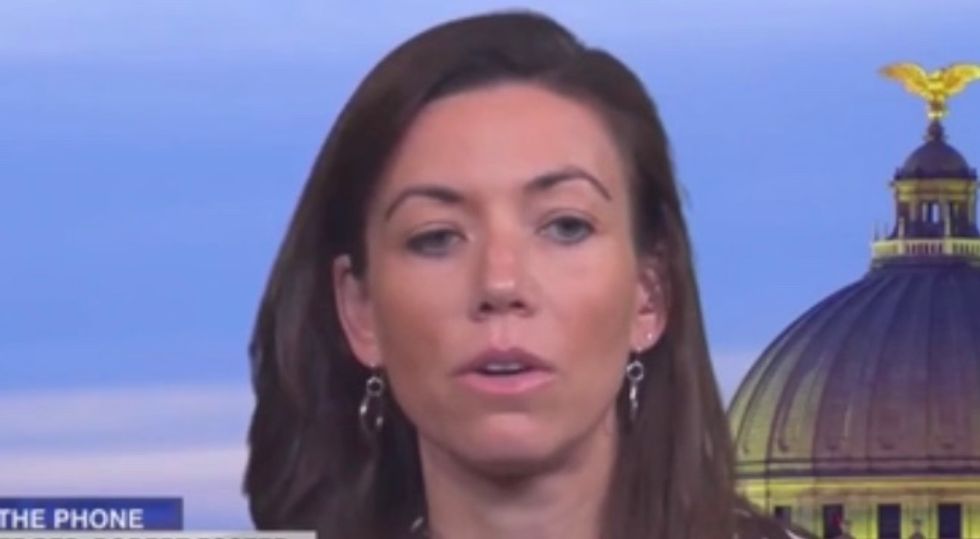 Mississippi state Rep. Robert Foster, who is running for the GOP nomination for governor, caused controversy this week by refusing to allow a female reporter to shadow his campaign without a male colleague present.

On CNN Thursday morning, the reporter, Larrison Campbell, confronted Foster about it.

"I think it’s important for everybody, you know, to understand the dynamics here," said Foster. "I’ve done several interviews over the last four years and I have no problem doing interviews with any reporter but this was a different request. It was to be a ride along as she stated and I have a very small campaign staff at this point in my campaign ... I didn’t want to end up in a situation where we were alone for an extended period of time within that 15 to 16-hour day. So out of precaution I wanted to have her bring someone with her, a male colleague. And the other thing I think is important to point out is this is my truck, and in my truck we go by my rules. And that’s my rule."

"You said it’s a precaution," said CNN anchor John Berman. "Is it you didn’t trust Larrison or yourself? I’m confused here."

"People don’t ask questions and don’t look to find the truth," said Foster. "Perception is reality in this world, and I don’t want to give anybody the opinion I’m doing something I should not be doing."

"Yeah, I’ve got a couple of things to say here," said Campbell. "First of all, like you said, it’s your truck, your rules. Why is it my responsibility to make you feel comfortable about something? ... Why is the onus on me to bring someone along?"

"Again, no other candidate has ever had a rule like this," said Campbell. "Let’s go back to the appearance and impropriety thing. Why does it appear improper for a man to be with a woman, unless at the end of day what you’re saying here is a woman is a sexual object first and a reporter second. People when they see a woman with a man are going to automatically assume she’s there with an improper relationship because, again, they see a woman as a sexual object first and as someone who’s doing my job second."

"Can I flip the script for a second?" said Campbell. "So let’s say one of the people running for Attorney General right now is the two-term treasurer, a woman, Lynch Fitch. If a woman did this, if a female candidate did this people would say she’s making men bring people along with her. Like if she doesn’t feel comfortable doing this, she can’t do her job. How can you do your job, how can you tell Mississippians you will be a good governor if you can’t, you know, be alone in a room with a woman? Look at our current governor Bryant's staff, one of his top attorneys, one of his top policy directors, those are all women. How are you going to do that if you can’t be alone with a woman?"

"It’s very simple," said Foster. "You always have the door open and have people right in the room next door, but this is not what we’re talking about. We’re talking about a 15 to 16-hour vehicle ride in my truck."

"So why aren’t you the one providing someone?" Campbell pressed him.

"I want to ask, representative, what do you think would happen if you’re alone in a room with Larrison?" cut in Berman. "She seems to be a professional reporter who asks questions. What do you think happens?"

"Nothing. We’re not talking about that," said Foster. "We’re talking about riding in my truck ... It’s just the perception. It’s a very professional rule that many other people, including Billy Graham and Gov. Mike Pence have followed and many other leaders in our nation."

"I want to kind of take a step back here and say, obviously this is a Mississippi situation that’s happened in Mississippi. It’s a Mississippi political story but it’s also I think is a bigger story than Mississippi," said Campbell. "I’ve heard from a lot of women in the last 24 hours, like around the country who, you know, whether it’s next door in Alabama or across the country in Colorado or L.A. ... Politics is a men's club. And, you know, for you’re a woman you’re seen kind of as an outsider. When you go back to this idea perception is everything, women are perceived to not belong there because people are — a large group of people are used to seeing men in those spaces."

"Absolutely they can do the same job," insisted Foster. "We’re talking about a specific 15 to 16-hour ride along in my truck and I had one caveat she did not want to follow that rule, and that’s okay. I have my position, and I don’t have to break my rule in my vehicle for anyone. And I think it’s also important to point out the fact because of the me too movement now men are under attack all of the time. Sometimes those accusations come out to be true and there are many times they’ve been proven to be false. I’m not going to allow myself to be put in a situation with any female where they could make an accusation against me and there’s not a witness there to refute that accusation."

"I think, look, there are a couple of things here," said Campbell. "I think we’ve got to go back to this idea. We can’t talk about this idea without talking about perception being everything. And if you’re saying the look of impropriety is out there, then you’re saying women don’t belong in these spaces, that women are sexual objects. And also if it is your rule in your truck, then you provide the person."

"I would say, look, we’ve got to call this what it is," Campbell added. "When a women isn’t given access to same things a man is given access to, it’s sexism."