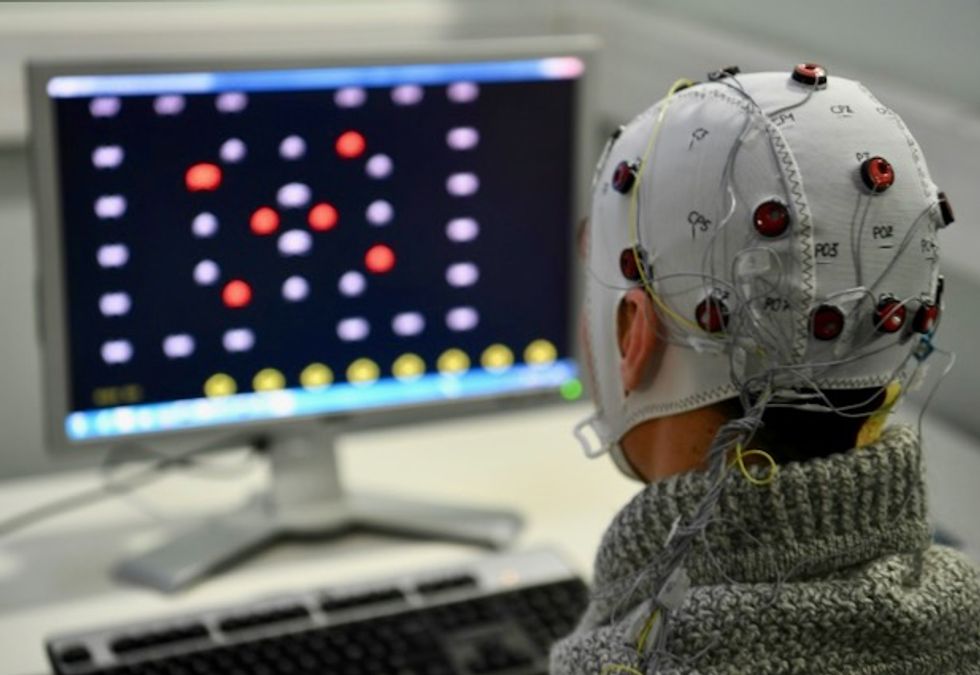 Progress is being made brain-computer interface technology, an example of which is seen at a French laboratory in 2017, but scientists say a vision outlined by Elon Musk to mesh brains and computers using artificial intelligence remains far off AFP/File / JEAN-PIERRE CLATOT

Even as Musk claimed his Neuralink startup had enabled a monkey to control a computer with its brain, experts were quick to dampen expectations for a futuristic scenario from "The Matrix" films, based on people with cybernetic implants.

Musk this week revealed his Neuralink startup is making progress on its brain-computer interface effort, and said the company hopes to begin testing on people next year.

Musk, founder of the automaker Tesla and the private space firm SpaceX, has long contended that a neural lace meshing minds with machines is vital if humans are to avoid being outpaced by artificial intelligence.

"This has a very good purpose, which is to cure important diseases and ultimately to help secure humanity's future as a civilization relative to AI," Musk said.

He disclosed that a Neuralink implant was successfully tested in a monkey in a California university lab.

"A monkey has been able to control a computer with his brain, just FYI," Musk said, surprising the Neuralink president during a question-and-answer session.

Experts remained cautious about his vision of merging minds with super-powered computing.

Musk's description "is really an aspirational vision for something very far down the line," said University of Southern California assistant professor of biology sciences Andrew Hires.

"It is unclear if we will ever get to that stage."

Neuralink unveiled a tiny sensor with hair-thin strands that could be implanted in a brain through a small incision by a robot built for the high-precision task.

"Ultimately, we can do a full brain-machine interface," Musk said.

"Achieve a sort of symbiosis with artificial intelligence."

For now, the goal is to let a person with the implants control a smartphone with thought, but the technology could eventually extend to other devices such as robotic arms, he said.

An early focus is using the technology to address brain diseases and paralysis, but the longer aim is to make implants so safe, reliable and easy that they could be options for people seeking to enhance their brains with computing power, according to the Neuralink team.

"It is not like Neuralink will suddenly have this incredible neural lace and it will start taking over people's brains," Musk quipped.

"It will take a long time, and you will see it coming."

Musk said the goal was to make adding the brain-enhancing implants as easy a procedure as laser eye surgery.

Experts remain skeptical of the claims from Elon Musk, who is seeking an interface that help people enhance their brain power with computers

David Schneider, a professor at the center for neural science at New York University, was among those who saw barriers.

A major limitation is that an array of regions of the brain are engaged for handling tasks, while implants target one part at a time.

"A the end of the day, everything we do, regardless of how simple it might seem, is a distributed brain function," Schneider said.

While technology has improved for reading information coming out of brains, it isn't up to snuff when it comes to sending it back to all the necessary parts simultaneously, according to researchers.

"They were humble enough to admit their main targets were motor areas," Ramana Vinjamuri, an engineering professor at Stevens Institute of Technology, said of Neuralink.

"I was happy they stopped there instead of claiming we are going to read your minds, your thoughts, your memories -- if they had done that I would have been laughing out loud."

Another challenge is that a brain implant triggers the body's defenses, which treat it as alien material to be rejected.

"Say Neuralink puts it in a person tomorrow, will the interface hold up after one year and still keep giving the same signals it did day one?" Vinjamuri said.

And regulatory approval would typically require long-term testing in animals.

Neuralink could seek an "investigational device" exemption to try implants in a few patients impaired by spinal cord injuries or strokes.

"I don't know that I want to meld my brain with AI, nor do I think do many of us," said Schneider.

His hope is that Neuralink innovations could restore sight, or cure paralysis.

For now, Musk is bringing energy and private investment to a brain implant area that researchers have been working on for decades with government funding.

"We need fantastical thinkers, but we also need capital and the bravery to invest lots of capital in refining these technologies," Hires said.