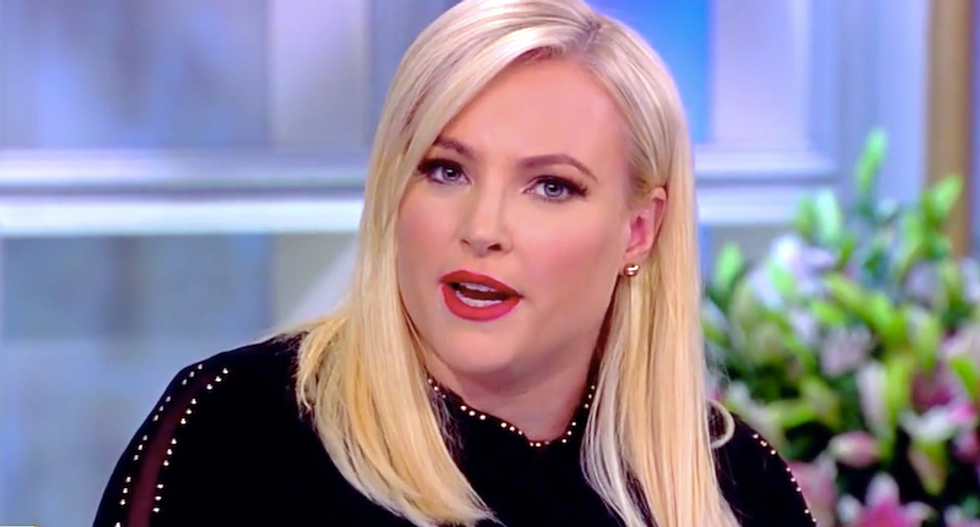 Meghan McCain slammed President Donald Trump for hurling racist abuse at four Democratic congresswomen to heighten divisions in his rival party, and then framed the debate in the exact same way he has.

The conservative co-host on "The View" condemned the president's statements urging the four first-year lawmakers to return to their home countries as racist, and then complained that one of their chiefs of staff had accused moderate Democrats of turning a blind eye to racism.

"I think the politics of this is fascinating," McCain began. "We spent our entire week last week talking about how racist and xenophobic the original comments and the chants were, and I stand by that statement."

"I will say AOC's chief of staff tweeted," she said, "he compared moderate Democrats to segregationists and said they were, quote, enabling a racist system."

McCain has been cheering on divisions within the Democratic Party while also warning them to remain united against the president.

"I compared it to fratricide because there is this deep infighting within the Democratic Party, and not just 'The Squad,' because there are more members of the Democratic Party that have the same similar views that 'The Squad' has, and more moderate Democrats, and I also think when (Rep.) Rashida Tlaib goes on 'CBS This Morning' and she says to Nancy Pelosi, 'acknowledge the fact this they are women of color so when you single us out, be aware of that and what you are doing, especially because some of us are getting death threats.'"

McCain herself helped single out Rep. Ilhan Omar, whom she's accused of anti-Semitism before Trump hurled the same accusation against the Somalian refugee-turned-lawmaker.

"I still think the debate between 'The Squad' and Nancy Pelosi and more moderate Democrats is what Trump wants," she said. "As long as they are the face of the Democratic Party, which I know there are people in here that are probably fans of theirs, but there are a lot of moderate Democrats in the country that maybe aren't on board with some of the radical things that they have said. He needs someone to fight with, and he needs an enemy, and right now they antithesize everything that (he promotes)."

"It's a purging of differences," Behar said. "The Republican Party, in my opinion, could use a little bit of that, where they go against each other instead of falling in lockstep with a fascist."

McCain said the divisions would cost Democrats the election.

Co-host Sunny Hostin disagreed that Ocasio-Cortez and the other first-year lawmakers were the face of the Democratic Party, and McCain responded by shouting.

"They are hugely powerful," she said. "They are our 'hot topic' every single day now."

Whoopi Goldberg cooled things down to head into a commercial break.

"We can get as loud as we want to," Goldberg said. "I still have to go to break. We'll be right back."