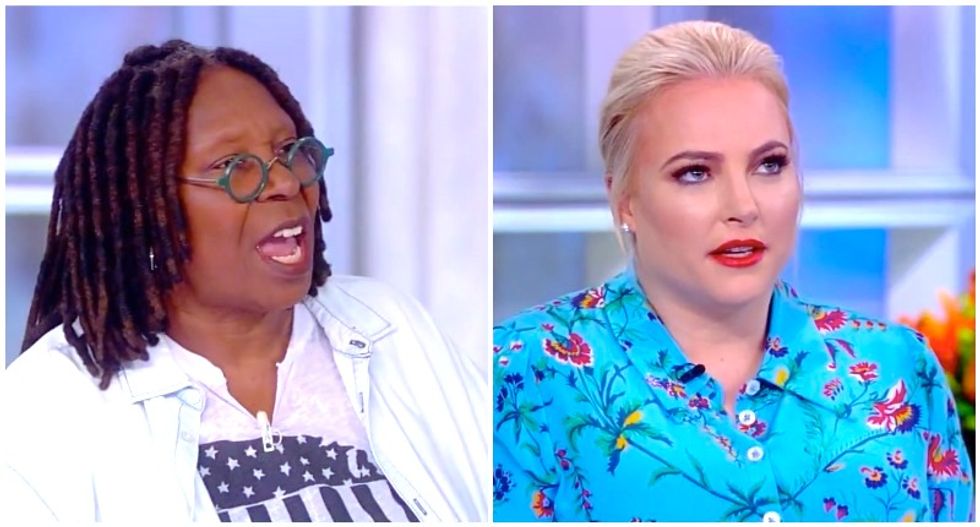 Panelists on "The View" agreed that President Donald Trump's labor secretary, Alex Acosta, should be removed over his role in securing a possibly illegal plea agreement with Epstein, and Goldberg asked why religious conservatives hadn't called for his resignation.

"Do you know who I'm waiting to hear from?" Goldberg said. "All those folks that are out there that talk about that they want to take care of young people and make sure young people are good. I just, you know, why isn't the evangelical community coming forward? Where is everybody?"

"That was worrying me," she added, "because I thought, well, one of the ways that you show that you care about people is you come out and you condemn this kind of stuff. But, you know, and all the folks that I'm used to hearing talk about, you know, this one is bad or this is bad or this -- haven't said much, and I was just wondering where they were."

"I don't think evangelicals are okay with pedophilia," she said.

Co-host Joy Behar asked whether any prominent evangelical leaders had spoken out against Acosta or Epstein, who counted Trump and former President Bill Clinton among his powerful and well-connected friends.

"I think the evangelical community in this country is massive," McCain said. "I don't know the number, but it's huge. So the idea that we're going to blame evangelicals right now --"

Goldberg interrupted to make clear she's not blaming evangelicals for the Epstein scandal, and McCain complained that she suggested they were hypocrites for remaining quiet about it.

"Well, I feel like we have heard from the community," Goldberg said, "and the voices of the community quite a bit about a lot of different things -- how I want to deal with my body, how you want to see your kid, whether children should be where -- and I have been waiting for them to say, and by the way, this isn't okay with us either."

McCain pointed out that Epstein was a Democratic donor, and then complained that Goldberg was politicizing the scandal.

"He a giant donor to a lot of Democrats, and he was very well-connected," she said. "I don't think this should be political or about religion."

Goldberg insisted she was not politicizing Epstein.

"This is my opinion," Goldberg said. "I'm just saying I would like to see some of the people that have been talking about all the ills in our country, I want to see them come out and say, yeah -- this is one of them. Because it sounds like there is no response, and this is just me, in my head, asking."

"My in-laws are evangelical," McCain said, "as I've said many times on this show, and they are good people."

Behar asked whether they had a platform to condemn Epstein, and Goldberg steered the conversation back on topic.

"They're not the folks that would be coming -- yeah, that's the thing," Goldberg said, as McCain sighed loudly. "Franklin Graham, those guys. Those are the guys we're talking about -- leaders."