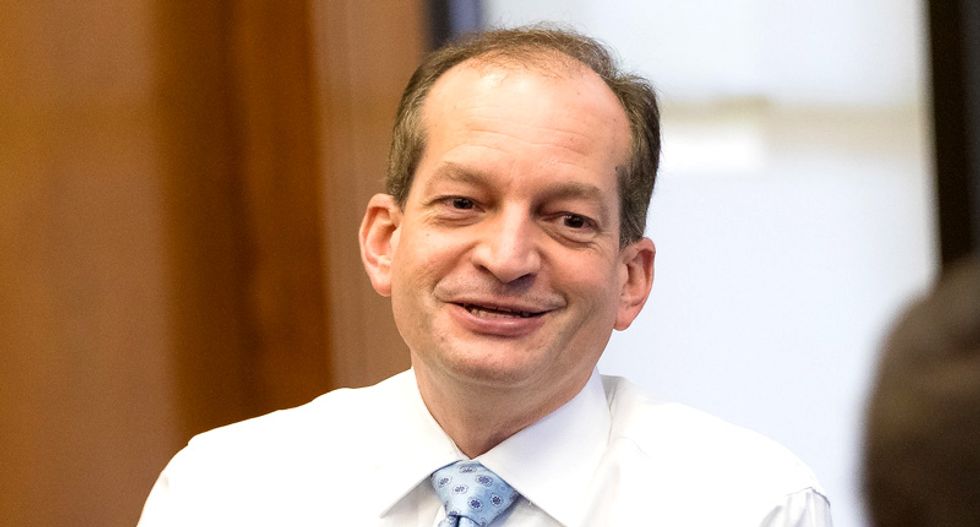 PBS News reporter Yamiche Alcindor explained in an MSNBC panel discussion Wednesday that President Donald Trump was waiting for Labor Secretary Alex Acosta to defend himself in public. The way he did it may not do anything for his own appearances, but Alcindor said that Trump will like one key aspect out of it: Acosta didn't apologize.

"People close to the president tell me that Acosta was really encouraged to have this press conference by President Trump," said Alcindor.

She noted that there were times when Acosta looked into the camera while he was answering questions and said: "I wouldn't have done anything differently."

"I understand what’s going on here," she continued. "And the media is getting this wrong. And it sounded a lot like President Trump, who of course is the person who told him to hold this press conference. I think what you see there is him not apologizing, not saying I regret some of the things I did. I couldn't have done things differently. And he is doing that because frankly, the president doesn’t do that."

She said that his boss is essentially telling him to get on TV and give the best defense possible. If he managed to perform in a way that Trump thought was acceptable he'll let Acosta keep his job.

"What you saw was him shifting blame and trying to tell other people you could have done a better job and I was a hero in the situation, but in reality, he wasn’t really saying here are the things I did wrong and here are some things I could have done differently," Alcindor said.

Former federal prosecutor agreed, saying that she couldn't help but notice that Acosta was quick to throw all of the Florida prosecutors and staff under the bus and blame them for his own mistakes. It's a page right out of the Trump playbook.