MSNBC guest immediately destroys Trump’s latest attacks on Elijah Cummings: ‘None of that holds up’ 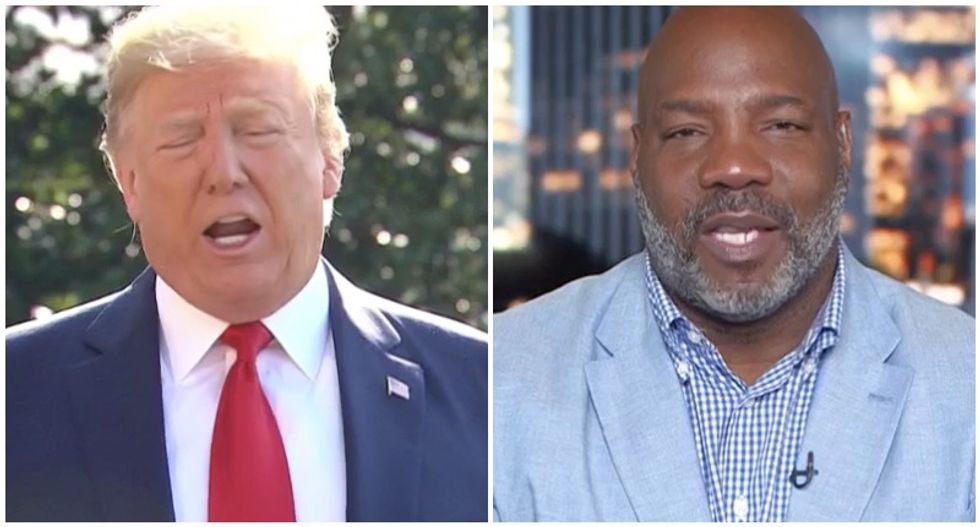 MSNBC guest Jelani Cobb explained how President Donald Trump exposed his own personal failings in his latest rant from the White House lawn.

The president lashed out at Rep. Elijah Cummings (D-MD) once again during the impromptu news conference Tuesday morning, accusing the Maryland lawmaker of putting his own corrupt intentions above the city he serves in Congress.

"It was quite entertaining," Cobb told MSNBC's Stephanie Ruhle. "I mean, so -- where to start?"

Cobb, a staff writer for the New Yorker and a Columbia University journalism professor, took a deep sigh before tackling the president's rant.

"Let's start with the actual numbers," Cobb began. "He is saying African-Americans love him and we're so grateful for what he is doing, yet somehow it seems somehow African-Americans themselves are unaware of this. His approval rate with black voters is 5 percent -- cinco, this many."

"Beyond that, Elijah Cummings' approval ratings have consistently been high," he continued. "So that doesn't seem to add up to the face of it. There is the other question about him alleging corruption, which is also so strange."

"What we know about the president's record, I mean, there's the cynicism to his political character we have seen for a long time, which is accuse other people of the things you're guilty of," Cobb said.

"We've had these questions going back to Trump University, the donations he made around trying to avoid prosecution and whether or not that was what happened," he continued. "The New York Times covering $400 million in income taxes that he was able to avoid paying. The nepotistic appointment of his family members to positions. We can try and walk through the churn of money coming to his hotel from foreign governments trying to curry favor with him. The number of Cabinet members who have had to step down. Ben Carson getting in trouble, an ethical rebuke for trying to decorate his office as if it was something from 'MTV Cribs.'"

"You don't have enough time to lay out all the ways in which he is culpable of the things he is accusing Baltimore of," Cobb added. "It's the same thing we have seen before. No, none of that holds up."

On Wednesday, the U.S. Court of Appeals for the Eleventh Circuit stayed a controversial ruling by a Florida district court judge that had effectively blocked the Justice Department and national security agencies from reviewing highly classified documents seized by the FBI at former President Donald Trump's Mar-a-Lago resort.

That order, by Trump-appointed Judge Aileen Cannon, had found that the former president had a compelling interest to those documents not being accessed by the executive branch until a special master had reviewed them for privilege, including executive privilege on behalf of Trump — even though no court has ever ruled former presidents have such privilege or that this privilege outweighs the U.S. government's interest in preventing breaches of classified information.

The wife of Supreme Court Justice Clarence Thomas has agreed to be interviewed by the House Select Committee Investigating the Jan. 6 Attack on the U.S. Capitol.

Citing a "source close" to the select committee, CNN's Jamie Gangel reports "the committee has reached an agreement with Ginni Thomas and will be conducting an interview in the coming weeks."

Watch: MTG urges voters to oust Mitch McConnell by ‘cutting the head off the snake’

This comes as McConnell has butted heads with Trump on candidate choices in key races around the country, and in particular pulled all support from the far-right Senate candidate in Arizona, venture capitalist Blake Masters.