MSNBC's Rachel Maddow: Mueller interjected that it is 'a crime’ to accept help from a foreign adversary 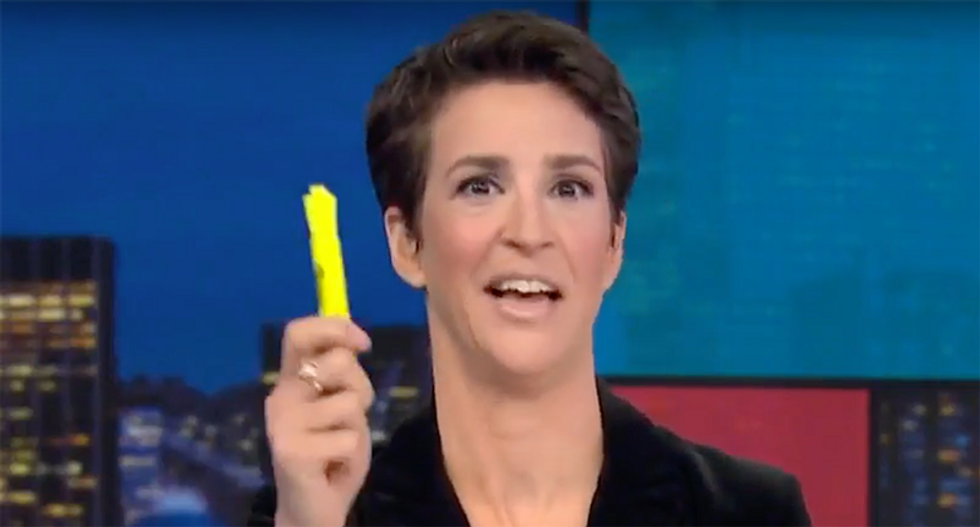 MSNBC host Rachel Maddow's show isn't for several hours, but she took a moment to speak to Nicolle Wallace about the important pieces of special counsel Robert Mueller's testimony that will likely be lost in the soundbite.

Wallace confessed that the "hot takes" from those on the panel in the wake of the hearings may not be the best takes. What Maddow said was the most important moment was when Mueller interjected with Chairman Adam Schiff (D-CA). Maddow said that it was at the end of the hearing, when everyone was clearly tired and things seemed to be winding down, that Mueller emphasized something important.

"At the very top of Chairman Schiff’s last questions, at the close of the hearing, Schiff said, 'I want to close out my questioning and turn to the exchange we had earlier. From your testimony today I gather you believe knowingly accepting foreign assistance during a campaign is an unethical thing to do.' And Mueller interjects — 'and a crime,'" Maddow reiterated

"He brings up the fact that it is criminal behavior as well. Schiff wasn’t even asking him there. On that and on the president’s promotion of WikiLeaks and on some of the stuff Mueller said was still under ongoing,  current FBI investigation in terms of people associated with the Trump campaign and their amplification and communication with them, welcoming of what Russia was doing.  I actually thought he went much further than I thought he was going to go, further than the report had within its four corners. I thought it was a fascinating and an aggressive tone. Right up to the end with Mueller, much more than I expected from him."