Mueller agrees the president was not exonerated by his report 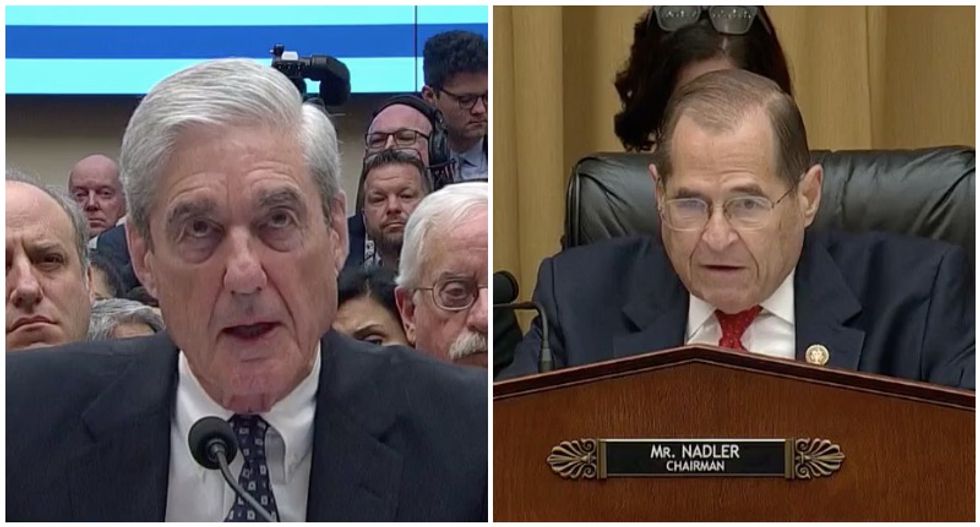 Robert Mueller agreed that his report did not exonerate President Donald Trump, whom he said tried to influence his investigation.

The special counsel told House Judiciary Committee chairman Jerry Nadler that the president had exerted undue influence on his investigation of Trump campaign ties to Russia, but he said Department of Justice guidelines prohibited him from charging the president with any crimes.

"The president has repeatedly claimed that your report found there was no obstruction and that it completely and totally exonerated him," Nadler said. "But that is not what your report said, is it?"

"Correct," Mueller said, "that is not what the report said."

"Reading from page 2 of Volume 2 of your report that's on the screen," Nadler said, "you wrote, quote, 'If we had confidence after a thorough investigation of the facts that the president clearly did not commit obstruction of justice, we would so state. Based on the facts and the applicable legal standards, however, we are unable to reach that judgment,' close quote. Now, does that say there was no obstruction?"

Mueller agreed that did not show that there was no obstruction.

"In fact," Nadler continued, "you were actually unable to conclude the president did not commit obstruction of justice, is that correct?"

"Well, at the outset," Mueller replied, "we determined that when it came to the president's culpability, we needed to go forward only after taking into account the (Office of Legal Counsel) opinion that indicated a sitting president cannot be indicted."

"So the report did not conclude that he did not commit obstruction of justice?" Nadler asked. "Is that correct?"

"That is correct," Mueller said.

"What about total exoneration?" Nadler continued. "Did you actually totally exonerate the president?"

"Now, in fact, your report expressly states that it does not exonerate the president," Nadler said.

"It does," Mueller replied.

"Your investigation actually found, quote, 'multiple acts by the president that were capable of exerting undue influence over law enforcement investigations, including the Russian interference and obstruction investigations,' is that correct?" Nadler asked.