‘Not a witch hunt’: Mueller blows apart Trump’s denials as Schiff lays out the case for Russia collusion 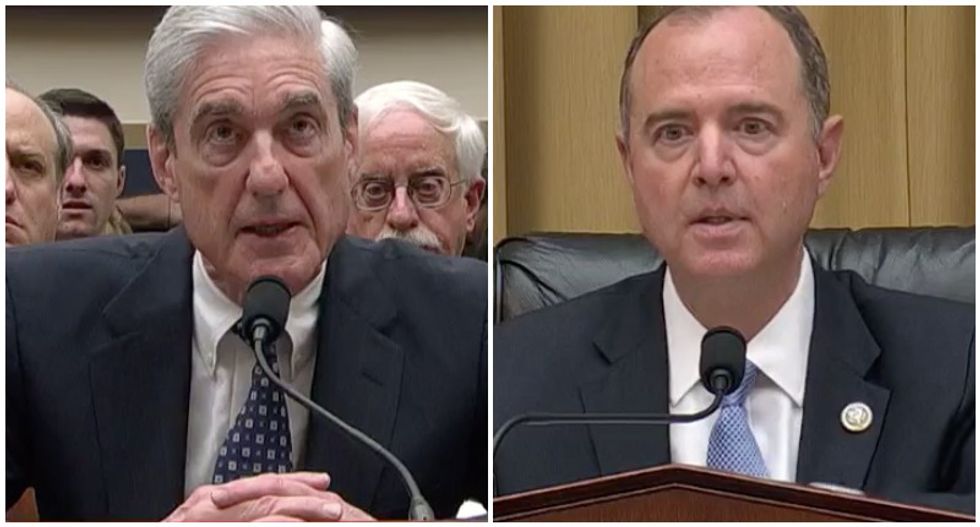 Robert Mueller blew apart President Donald Trump's claims that the Russia investigation was a "witch hunt" as Rep. Adam Schiff (D-CA) made the case that his 2016 campaign engaged in foreign collusion.

The former special counsel testified before the House Intelligence Committee, where the committee chairman -- a former assistant U.S. Attorney -- laid out the evidence that Trump and his campaign knowingly accepted election assistance from Russian government operatives.

"Your report describes a sweeping and systematic effort by Russia to influence our presidential election, is that correct?" Schiff asked.

Mueller agreed, and he also agreed that the Trump campaign did not notify the FBI of offers of assistance received from Russian individuals.

"In fact, the campaign welcomed the Russian help, did they not?" Schiff asked.

"I think we reported in our report indications that occurred," Mueller agreed.

"The president's son says, when he was approached with dirt on Hillary Clinton, that the campaign would love it?" Schiff said.

"That was generally what was said, yes," Mueller agreed.

"The president himself called on the Russians to hack Hillary's emails?" Schiff said.

"There was a statement by the president in those general lines," Mueller agreed.

Mueller agreed that Trump had on multiple occasions praised the release of emails stolen by Russian hackers and dumped online by WikiLeaks, and he agreed that some individuals -- including Paul Manafort and Michael Flynn -- had tried to make money from foreign sources while working on the transition team.

"Generally that is accurate," Mueller said.

Mueller agreed that Trump was trying to pursue a real estate venture in Moscow during the election, and he agreed that Manafort and other Trump associates, including his attorney Michael Cohen, had lied to investigators about those foreign contacts.

"When Donald Trump called your investigation a witch hunt, that's also false, is it not?" Schiff asked.

"Your investigation is not a witch hunt," Schiff said.

"It is not a witch hunt," Mueller agreed.

Mueller agreed that Russian operatives committed crimes in an effort to help Trump's campaign, and he agreed that the campaign built a messaging strategy based on those stolen emails.

"Then they lied to cover it up," Schiff said.