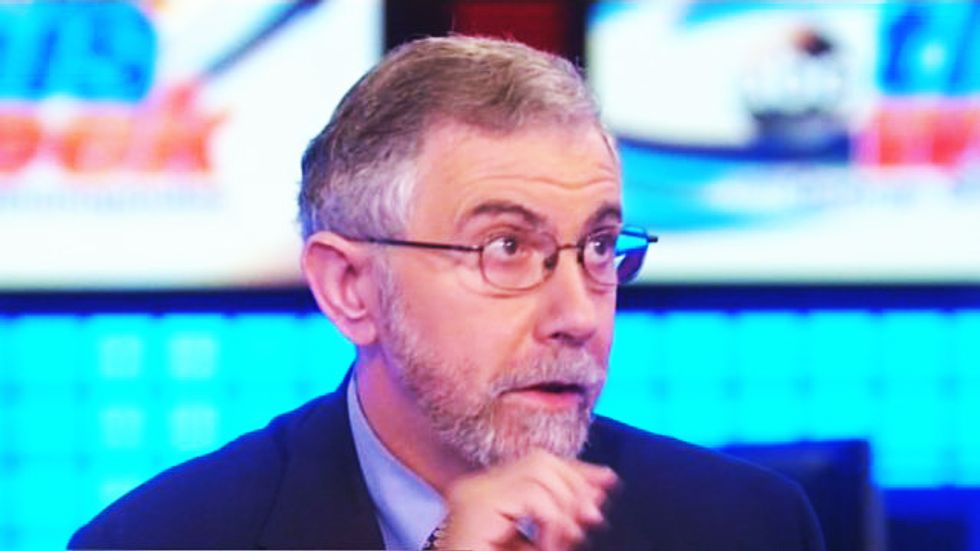 In an uncompromising column for the New York Times, Nobel Prize-winning economist Paul Krugman accused Donald Trump and his enablers of personally profiting from the "atrocities" that are the end result of the president's own policies.

Posing the question, "Is it cruelty, or is it corruption?" Krugman explained that all evidence points to a mixture of both.

Starting with the president himself, Krugman writes, "Why is the administration providing cover for Saudi Arabia’s crown prince, who almost surely ordered the murder of The Washington Post’s Jamal Khashoggi? Part of the answer, probably, is that Donald Trump basically approves of the idea of killing critical journalists. But the money the Saudi monarchy spends at Trump properties is relevant, too."

Calling the administration's handling of immigrants seeking safety in the U.S. an "atrocity," -- and admonishing critics of the term by writing " save the fake outrage. Yes, they are atrocities, and yes, the detention centers meet the historical definition of concentration camps" -- Krugman called out the associates of Trump who are cashing in.

"A majority of detained migrants are being held in camps run by corporations with close ties to the Republican Party," he charged. "And when I say close ties, we’re talking about personal rewards as well as campaign contributions. A couple of months ago John Kelly, Trump’s former chief of staff, joined the board of Caliburn International, which runs the infamous Homestead detention center for migrant children."

Noting a trend towards the privatization of public services that began in the 1980's, Krugman claimed the move opened the door for political corruption that has k reached its nadir on Trump.

"There’s no reason to presume that private firms will do a better job when there isn’t any competition, because the government itself is the sole customer. In fact, studies of privatization often find that it ends up costing more than having government employees do the work," he explained. "Between campaign contributions and the revolving door, plus more outright bribery than we’d like to think, private contractors can engineer overpayment on a scale beyond the wildest dreams of public-sector unions."

"Many people have, I think, forgotten about the disastrous Bush administration occupation of Iraq, but the incompetence and abuses of politically connected private contractors, like Erik Prince’s security company Blackwater, played a major role in the debacle. Did I mention that Betsy DeVos, Trump’s secretary of education and a key defender of for-profit education, is Prince’s sister?" he wrote.

"It would, I think, be going too far to claim that the private-prison industry — merchants of detention? — has been a driving force behind the viciousness of Trump’s border policy," he conceded. "But the fact that crony capitalists close to the administration profit from the viciousness surely greases the path."

He then concluded, "As I suggested at the beginning, cruelty and corruption are intertwined in Trump administration policy. Every betrayal of American principles also seems, somehow, to produce financial benefits for Trump and his friends."

Michelle Obama talks about her book ‘Light We Carry’ in Chicago with David Letterman: ‘The world made me practice liking myself’

CHICAGO — Michelle Obama doesn’t tour for a book. She appears. She materializes, like a fond memory from a better time, suddenly in front of you again, barely aged. She has become the closest thing — arguably — America has to royalty. That’s not opinion. That’s just very selective facts. “Becoming,” her previous memoir, sold 17 million copies worldwide and that book tour, four years ago, played sold-out arenas. Her new book, “The Light We Carry: Overcoming in Uncertain Times” — though pulling no way near the record-breaking numbers of “Becoming” — is poised to be the holiday’s bestselling book...