Put off by US, Chinese students eye other universities 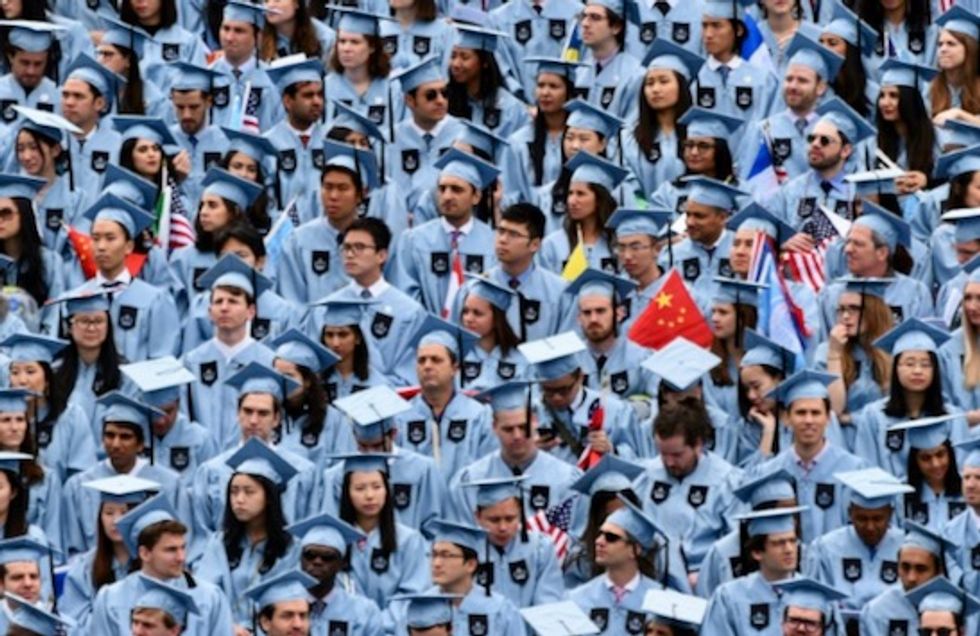 Besides the trade war, a travel warning by Beijing citing 'gun violence and robberies' in the US has also given Chinese students cold feet AFP/File / TIMOTHY A. CLARY

Caught in the crossfire of the US-China trade war, Chinese students are looking for alternative study destinations -- threatening to turn off an important source of revenue for American universities.

China accounts for nearly a third of foreign students on US campuses who pour billions of dollars into the economy, but in March their numbers dropped for the first time in a decade.

Visa delays, concerns over being shut out of research projects and safety fears have turned off Chinese students, according to several admissions consultancies and nearly a dozen parents and students interviewed by AFP.

GETTY IMAGES NORTH AMERICA/AFP/File / JUSTIN SULLIVAN Visa delays, concerns over being shut out of research projects and safety fears have turned Chinese students off studying in the US

Japan and South Korea -- traditional study abroad destinations for the Chinese elite -- and parts of Europe, especially Germany and Scandinavian countries with strong engineering programmes, have also seen an uptick in applications, the survey found.

The chilling effect started mid-last year, after President Donald Trump's administration slashed the visa duration of students in science and technology fields from five years to one in some cases.

"Now there's a lot of uncertainty on whether they can even finish their studies," said Gu Huini, founder of boutique college consultancy Zoom In.

Over one third of the roughly 360,000 Chinese students in the US study in "STEM fields" -- science, technology, engineering and mathematics -- according to the Institute of International Education in New York.

But the number of Chinese students in the US dipped by two percent in March compared to the previous year, the first drop since 2009, data from the US Immigration and Customs Enforcement shows.

Melissa Zhang, a high school senior in Beijing, said she has abandoned plans to go to the US and was instead taking German lessons, in the hope of getting into a robotics programme in Dresden.

AFP/File / Greg Baker China accounts for nearly a third of foreign students on US campuses who pour billions of dollars into the economy, but in March their numbers dropped for the first time in a decade

"I've already wasted a year preparing for my SATs," the 17-year-old said, referring to the standardised test needed to enter a US university.

"But what's the point in going to the US if I might be shut out of a research lab, just because I am Chinese."

Her mother, Mingyue, said "the American dream is losing its shine" to many Chinese students.

"If America makes them feel unwelcome, they'll go elsewhere... this generation feels the whole world is open to them."

Chinese students contributed $13 billion to the US economy last year, a figure that includes tuition fees and living expenses, according to NAFSA: Association of International Educators.

Top US universities including Yale and Stanford have complained that the trade war has affected campus recruitment.

Rafael Reif, president of the Massachusetts Institute of Technology, wrote in an open letter on June 25 that students and faculty felt "unfairly scrutinised, stigmatised and on edge –- because of their Chinese ethnicity alone".

The State Department has said the increased scrutiny was prompted by a rising number of students who were co-opted by foreign intelligence while in the United States.

Eric Wang, 25, a doctoral student at Purdue university in Indiana, said he was nervous about having to renew his visa every year.

"It's difficult to plan long-term research projects or even think about going steady with your girlfriend," said Wang.

Trump attempted to allay Chinese students' fears after reaching a trade war truce with President Xi Jinping at the G20 summit last week, saying they would be treated "just like anybody else".

He also proposed a "smart person's waiver" that would make it easier for the brightest minds to get a Green Card allowing permanent residency.

A Chinese government travel warning last month citing "gun violence and robberies" in the US has also given Chinese high school students and parents cold feet.

"State media have been pumping up reports about crime in the US and families, especially from smaller Chinese cities, feel America isn't safe," said Li Shaowen, who organises foreign college tours.

GETTY IMAGES NORTH AMERICA/AFP/File / Scott EisenThere are roughly 360,000 Chinese students in the US

"We have over 250 families visiting universities in Europe and the UK during this summer break, while only 75 families are going to the US," he said. "The numbers were reverse last year."

"The pipeline is drying up," said Dorothy Mae, an independent college consultant in Beijing. "US universities will see fewer students from China for several years."