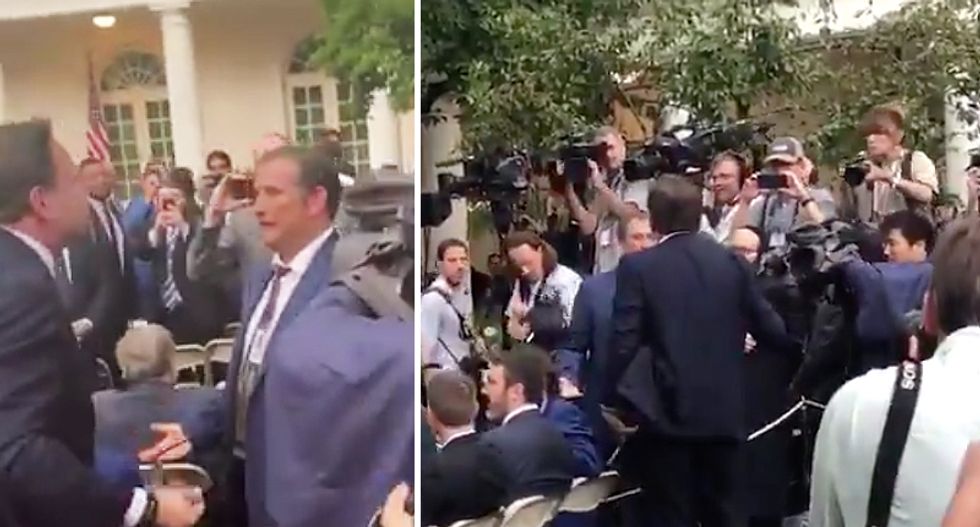 Things got heated in the White House Rose Garden when right-wing conspiracy theorists faced off against actual journalists.

PBS NewsHour reporter Courtney Norris was one of the members of the press pool reporting on President Donald Trump's recent decision to cave in on the census. But things got heated after the president left.

Prior to the press conference, however, Trump spoke to a crowd of right-wing conspiracy theorists welcomed to the White House to talk about his 2020 campaign. Trump told the group that if they wanted to join him in the Rose Garden that they would be welcomed.

After finishing his press conference, Trump exited with Attorney General Bill Barr and Commerce Secretary Wilbur Ross, but the right-wing social media influencers reportedly got "in the faces of the media" as they were trying to exit.

Norris noted that it was still a "scene" and that one video she captured showed former Trump aide Sebastian Gorka and Joy Villa yelling.

BREAKING: The President has left and guests of the social media summit have started getting in faces of the media a… https://t.co/oRvU9YuhfS
— Courtney Norris (@Courtney Norris)1562881945.0

This is the scene in the Rose Garden at the White House after the President’s citizenship question announcement. Gu… https://t.co/OyqbUzpqR1
— Courtney Norris (@Courtney Norris)1562882319.0

That was a wild one 🔥White House Repoeter @BrianKarem said the crowd in attendance for the President’s announcemen… https://t.co/xTeYh18VZ7
— Benny (@Benny)1562883045.0