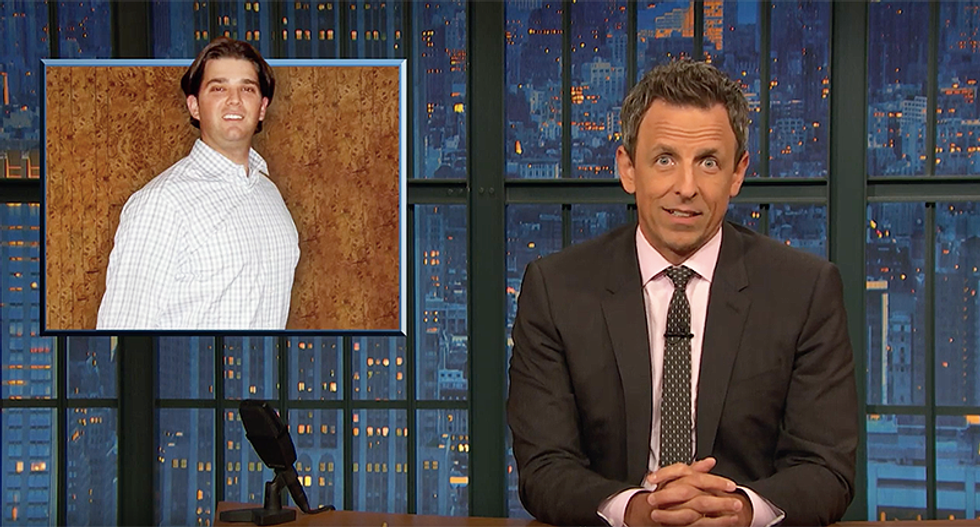 Meyers showed the clip of Trump appointee Ken Cuccinelli going down in flames in a CNN interview where he tried to pretend he hadn't heard the president's racist tweets. The host not only read the tweets for Cuccinelli, but she also caught him being asked about the tweets the day before on another show.

"Seriously, the only way you can support Trump at this point is if you have the part of your brain that's responsible for memory replaced with the brain of a goldfish," Meyers quipped. He then went into a hilarious exchange with that person.

"Sorry, one sec, I gotta eat these food flakes."

But what made Meyers laugh the most was the fact that Cuccinelli was once so disgusted by Donald Trump, that at the GOP convention in 2016 he shouted his displeasure into a microphone on the floor and threw his credentials down. Don Jr. then did an interview where he said that Cuccinelli looked like an idiot.

"You're talking about Ken Cuccinelli. Are you saying he is an idiot?" asked an MSNBC reporter.

"I'm saying they look like idiots when they do that," Don Jr. replied.

"Imagine -- imagine how pathetic you have to be to take a job in the Trump administration after Donald Trump Jr. called you an idiot," Meyers laughed. "Donald Trump Jr.! This is a guy who doesn't even know how to stand like a normal human being. I mean, look at him. He looks like he's always waiting for someone to pin a medal on his chest. 'My father says I'm getting an award for most oily!'"