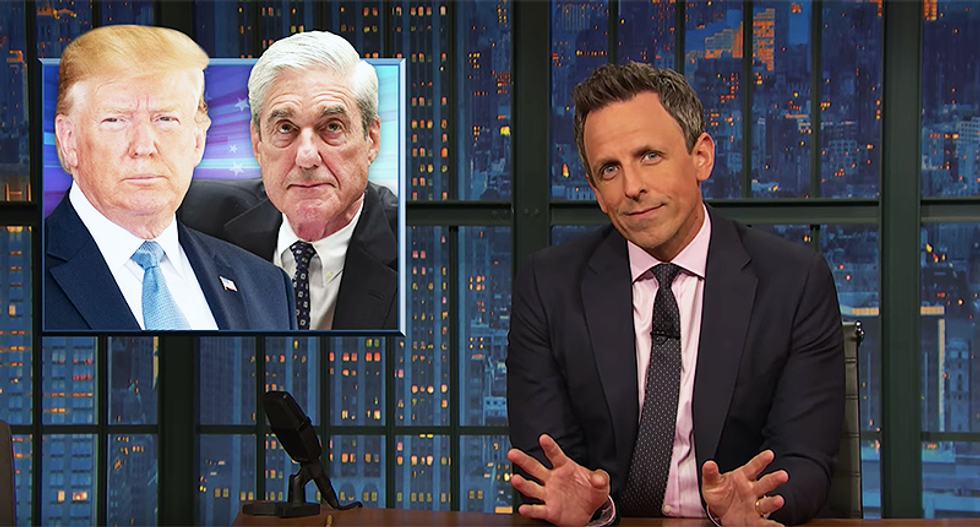 Late-night host Seth Meyers knows President Donald Trump pretty well, after having to craft jokes about him for four years. Former special counsel Robert Mueller, on the other hand, only had to deal with the president for two-and-a-half years while researching the details behind the Russia investigation.

During his testimony Wednesday, Mueller revealed that he and his staff worked to try and interview the president for over a year. They negotiated, gave concessions, but nothing swayed Trump and his lawyers to allow the president to sit before the special counsel. Despite claiming he did nothing wrong, Trump refused to do anything other than answering a list of questions that was generally referred to as the "take-home test."

Still, those questions seemed difficult. According to Mueller's testimony Wednesday, Trump gave false statements in the written questions he provided. Giving a false statement to investigators is lying under oath, something for which Trump's many staffers have been charged with already.

Meyers, however, had the solution that Mueller needed the entire time.

"You didn't go through the proper channels," Meyers explained. "If you want Trump to give you an answer you either have to go through Fox News or sending him a rambling tweet that praises him in a syntax he's familiar with."

"@realDonaldTrump Mr. Very Innocent President, sir, we would LOVE for you to sit down for A VERY EXONERATING interview, sir, because you are the best and MOST NOT GUILTY president with the MOST INNOCENCE, sir, and everyone says so, sir!" was Meyers example. Ironically it came from the Twitter account @RobertMueller44. Staff for each president puts the number of the president they serve after their name. President Barack Obama was 44 and Trump is 45.

Meyers then took a jab at Rep. Doug Collins (R-GA) who promised Mueller he would speak slowly, except when he spoke so fast no one could follow what he was saying.

"What are you an auctioneer?" Meyers asked. "He didn't get any questions answered, but he did sell three paintings and a hog."

The host then knocked Republicans for the constant claim that they agreed that the president isn't "above the law."

"No, I agree, because that isn't a thing," Meyers said. "Though if anyone could be below the law, it would be Donald Trump. Trump looks up at the law the way he looks up at an eclipse."

He showed the photo of Trump looking at the eclipse without the special glasses that protect your eyes.