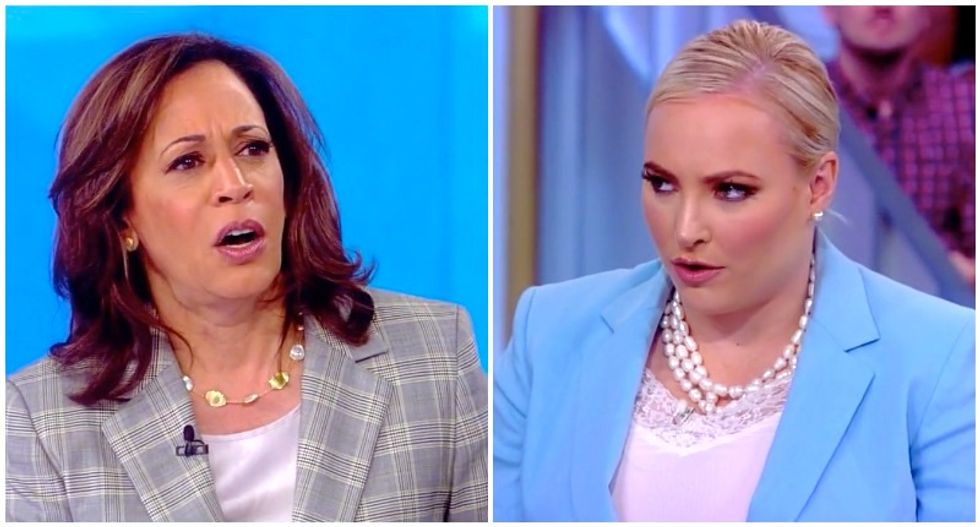 Sen. Kamala Harris (D-CA) busted Meghan McCain for misrepresenting her position on border security during a lengthy appearance on "The View."

The Democratic presidential candidate answered a wide range of questions from the panelists, who tried -- and failed -- more than once to get Harris to criticize Rep. Alexandria Ocasio-Cortez (D-NY).

"I'm going to try to make this as quick and dirty as possible," McCain said. "You're for decriminalizing border crossings, you're one of the people that raised your hand at the debate. Do you agree with AOC that we should get rid of DHS altogether?"

The smile melted from Harris' face as McCain spoke, and she immediately pounced on her inaccurate statement before addressing the substance of the question.

"That is not correct," she said. "I am not in favor of decriminalizing or not having consequence -- let me be very clear. We have to have a secure border, but I am in favor of saying that we're not going to treat people who are undocumented and cross the border as criminals."

"What we cannot do is have any more policy like we have under this current president that is about inhumane conduct, that is about putting babies in cages, that is about separating children from their parents and we have got to have policy that is about passing comprehensive immigration reform with a pathway toward citizenship."

McCain tried to lure Harris into a trap.

"Clarify this for me, though, because I do find it confusing," McCain said. "I believe if someone crosses over the border illegally, it is illegal, and you would decriminalize it."

Harris stuck to her stated position.

That seemed to satisfy McCain, who stayed out of the way and let Harris continue talking.

"You've got to play by the rules, but we can't treat people like criminals when they are crossing the border, and incarcerate them and separate families," Harris added.

McCain admitted that it was hard for her to wrap her head around the nuances of border security because conservatives held fast to an all-or-nothing approach to immigration.

"I think just for conservatives it's a talking point that we think open borders is something the left wants," McCain said, "and I understand we have a difference of opinion."

Harris said, despite their differences, she did believe in securing the border, and then McCain pressed her on Ocasio-Cortez's proposal to eliminate the Department of Homeland Security.

"No, I would not," Harris said. "We need to restructure and reform it. It has been found through federal audits to be one of the most dysfunctional of the federal agencies, so we need to deal with it and fix it, but I do not believe in getting rid of it."