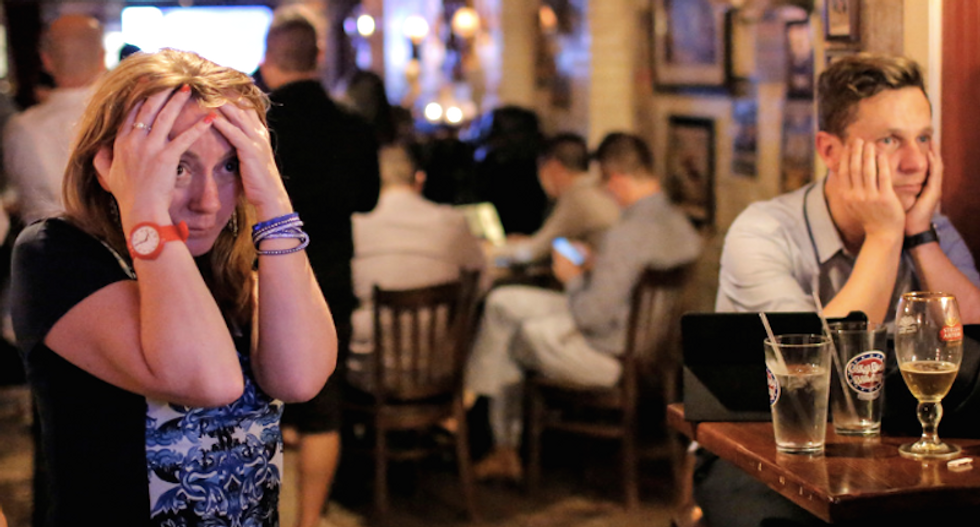 People at The Churchill Tavern in NYC react to the Brexit vote. (REUTERS/Andrew Kelly)

Britain is facing an uncertain future and an uneasy relationship with Europe after Brexit. Among other things, the country’s woeful inability to learn languages has been raised as a key stumbling block – with the decline in foreign language learning among school and university students across the UK also raising alarm.

English is one of the official languages of the EU, along with 22 others, and also one of the three working languages of its institutions (with German and French). On top this, English is the most commonly taught foreign language in Europe, which is a major factor in why it is the most commonly used working language. Although not everyone is happy about this, including the French EU ambassador who recently walked out of a meeting on the EU budget when the Council decided to use only English translations.

So, even if Britain leaves the EU, English will remain not only an official language –- because of the member status of Malta and Ireland –- but it will likely also remain the principal working language of the EU institutions.

English is also often used globally as a common language between speakers of different languages. In other words, conversations are happening in English that do not involve native English speakers. This, of course, has a long and fraught colonial past – as the British Empire forced English on its colonies. But the decline of the Empire did not mean the decline of English. On the contrary, as the US rose to be a global economic power, globalisation drove the spread of English across the world – and continues to do so. And the European Union is no exception.

As part of my ongoing PhD research on the translation profession, I interviewed some British translators working at the European Commission. From their perspective, English will remain the principal working language following Brexit, as switching to only French and German, or adding another language would be unrealistic and require a huge investment in training by the EU. Instead, they report that English will continue to be used, and will simply evolve and change in these settings.

So-called “EU speak” is an example of this. Non-native speakers’ use of English is influenced by their native languages, and can result in different phrasing. For example, within the EU institutions, “training” is often used as a countable noun, meaning you can say: “I’ve had three trainings this week”. In British English, however, it is uncountable, meaning you would probably say something like: “I’ve had three training sessions this week”.

This is a minor linguistic point, but it shows how English is changing within the EU institutions due to the influence of non-native speakers. For the time being, native English speaking translators and editors limit the extent of these changes – particularly in documentation intended for the public.

But if Britain leaves the EU, there will be a dramatically reduced pool of native English speakers to recruit from, because you need to have an EU passport to work in the institutions. As people retire, fewer native speakers will work in the EU, meaning they will have less and less influence on and authority over the use of English in these contexts. This means “EU English” will likely move away from British English at a faster pace.

Such change is nothing new – especially with English. “Singlish” or Singaporean English has its roots in colonial rule and has since become independent from British English, integrating grammar and vocabulary from languages that reflect Singapore’s immigrant history – including Malay, Cantonese, Mandarin, and Tamil among others. Singlish has developed its own words and expressions out of this hybrid of languages and has evolved and shifted in response to the migrations of peoples and cultures, new technologies and social change.

Only time will tell whether “EU English” will ever move so far from its moorings. But, according to one translator I spoke to, even if Britain were to stay in the EU, English would continue to change within the institutions:

English doesn’t belong to us anymore as Brits, as native speakers, it belongs to everyone.

And the frequent exposure to and use of English in daily life means other language communities are increasingly gaining a sense of ownership over the language.

The ubiquity of English is sometimes touted as a demonstration of the enduring importance of Britain – and the US – on the world stage. From what I have seen researching translation, this assumption in fact shows how complacent English speaking countries have become.

This does not mean the economic, cultural, and military power of these countries should be dismissed. But this doesn’t change the fact that English is used as a common language in interactions that do not involve any of those countries – take, for example, a Slovenian cyclist being interviewed in English by a French journalist about his performance in the Italian cycling event Giro d’Italia.

Linguistic diversity certainly needs to be championed to ensure we do not lose humanity’s great variety of languages and dialects, and some great work is being done on this. Nevertheless, it is clear that English has developed a role distinct from its native speakers as a shared language that facilitates communication in an increasingly globalised world.