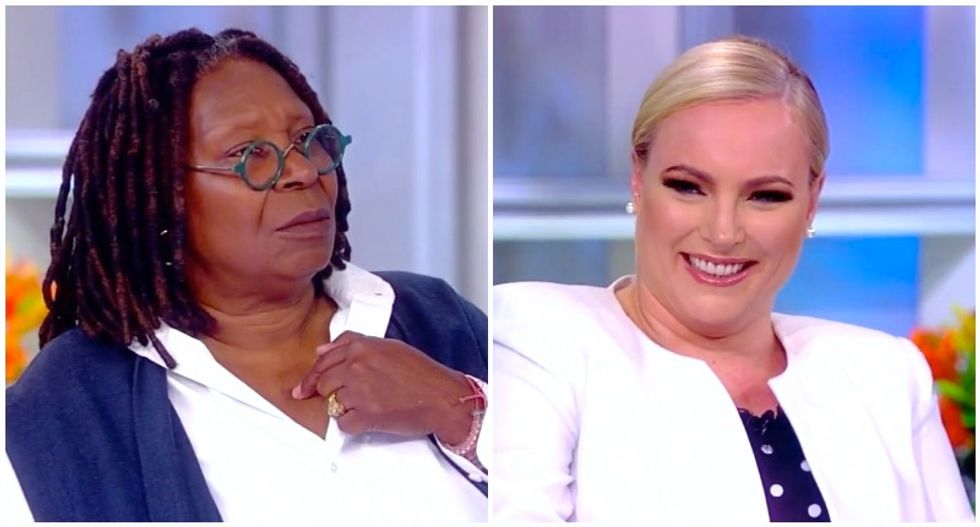 Whoopi Goldberg quickly threw cold water on Meghan McCain after she gloated that they agreed on the Democratic primary fight.

"The View" panelists were discussing the continuing fallout over former Vice President Joe Biden highlighting the compromises with segregationist senators that he made as a young lawmaker, and McCain repeatedly complained that Barack Obama had never taken enough heat for eulogizing the late Sen. Robert Byrd.

"If you are going to hit Joe Biden for eulogizing Robert Byrd," said McCain, referring to the former Ku Klux Klan member who later renounced racism, "you have to hit Obama."

Goldberg agreed a lot of public figures must atone for past racism, and started to take her turn in the discussion, when McCain briefly quarreled with co-host Sunny Hostin.

"You're missing the point," Goldberg said.

Goldberg then glared at the end of the table, toward Hostin and McCain, and cleared some space to speak.

"The point that I am making," she said, "is that if you start to cannibalize because you want to win, we're going to end up losing. So everybody needs to get themselves in order. this is just my opinion."

McCain cut in again, and said she's made the same point.

Goldberg quickly cut her off.

"Actually, no it doesn't," Goldberg said, "but I understand the joke."

McCain stammered an explanation, but Goldberg didn't want to hear it."

"Yes, but you missed the point, too," Goldberg said, shutting up McCain. "We'll ask Kamala Harris when she gets here Friday."