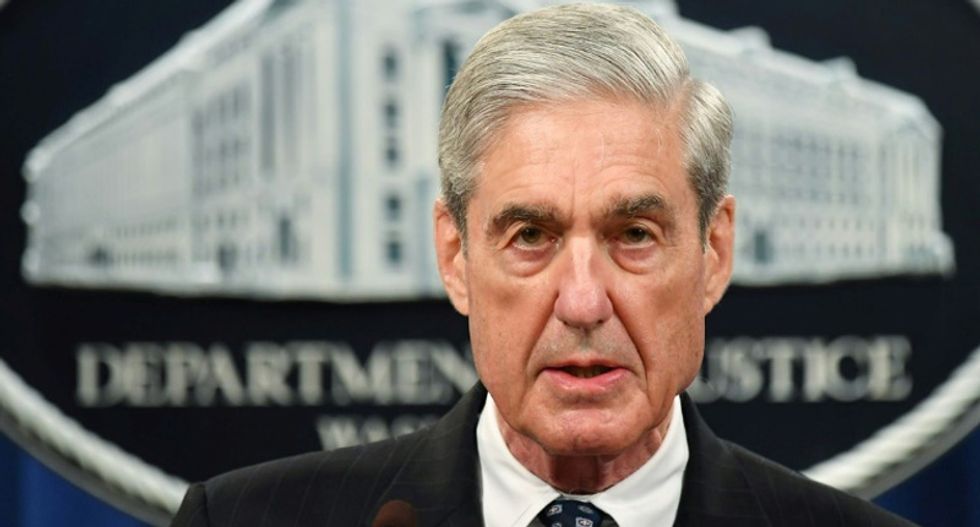 After weeks of dithering, the House Judiciary and Intelligence committees have subpoenaed Robert Mueller to testify July 17 about his investigation into Russia’s election interference and possible obstruction of justice by President Donald Trump. Mueller has reluctantly agreed to honor the subpoenas. He will testify publicly in front of both committees, back-to-back, before continuing in closed sessions.

Here are 10 questions I would ask if given the opportunity. They are grouped by category, together with the rationales behind them and what I anticipate would be Mueller’s answers, evasions and flat-out refusals to comment:

On Mueller’s Agreement to Testify

It’s no secret that Mueller doesn’t want to answer any questions from Congress—or anyone else, for that matter—either in public or behind closed doors. He told us as much in the prepared statement he read on live TV on May 29.

It’s understandable. Mueller believes his work is done, and that he should be permitted to ride off into the sunset and return to private law practice, hailed as a hero. As he said on May 29, “My report is my testimony.”

Mueller is a former FBI director. It’s time for him to face the music (and the cameras).

An estimated $35 million was spent to fund Mueller’s work; now it’s time for ordinary Americans to hear from him under oath. His report is 448 pages long, packed with dense legalese, and few people—besides political nerds and constitutional-law wonks like me—have taken the time to plow through it.

The special counsel has a moral obligation not only to explain what he found, but to clear up ambiguities in his report, of which there are many. A subpoena should not have been necessary to secure Mueller’s appearance before Congress. He should have come forward voluntarily, as independent counsel Ken Starr—not exactly an ethical exemplar—did during the House Judiciary Committee’s impeachment hearings on Bill Clinton. Yes, I know, we aren’t at the impeachment stage yet, but read on.

The president has ordered his aides, current and former, not to honor congressional subpoenas under the bizarre legal claim that they are “absolutely immune” from being compelled to testify. We deserve to know if the administration has similarly tried to bully the former special prosecutor.

If anyone has attempted to muzzle Mueller, Attorney General William Barr would be the prime suspect. On March 24, Barr penned a letter to Senate and House leaders purporting to summarize the Mueller report’s key findings. Among other things, Barr “cleared” Trump in the letter of any acts of obstruction.

On March 27, Mueller wrote to Barr, complaining that the attorney general’s summary did not “fully capture the context, nature, and substance” of his report, resulting in “public confusion about critical aspects of the results of our investigation.” And what else is there, ultimately, but context, nature and substance? In effect, he accused Barr of lying. Yet Mueller made an abrupt about-face in his May 29 press conference, declaring that he doesn’t question the attorney general’s “good faith.”

We shouldn’t do the same.

Barr has turned the Department of Justice into something more akin to Trump’s personal defense firm. Even if Mueller refuses to answer the question, he should be put on the spot, if only to underscore Barr’s obfuscation and malfeasance.

Last month, after weeks of negotiations, the Justice Department agreed to turn over to Congress some of the underlying evidence discovered by Mueller’s investigators. No agreement, however, has been reached to turn over a completely unredacted version of the probe’s findings.

It is estimated that between 6% and 12% of the report has been blacked out. The redacted sections include, among other matters, important material about the probe into WikiLeaks’ alleged involvement in Russian election interference.

I wouldn’t expect Mueller to answer this question, and if any member of Congress has the fortitude to ask it, I think Mueller will dodge it. Still, the question should be posed. We have a right to know what’s been concealed from the public, like this troubling section from page 30: 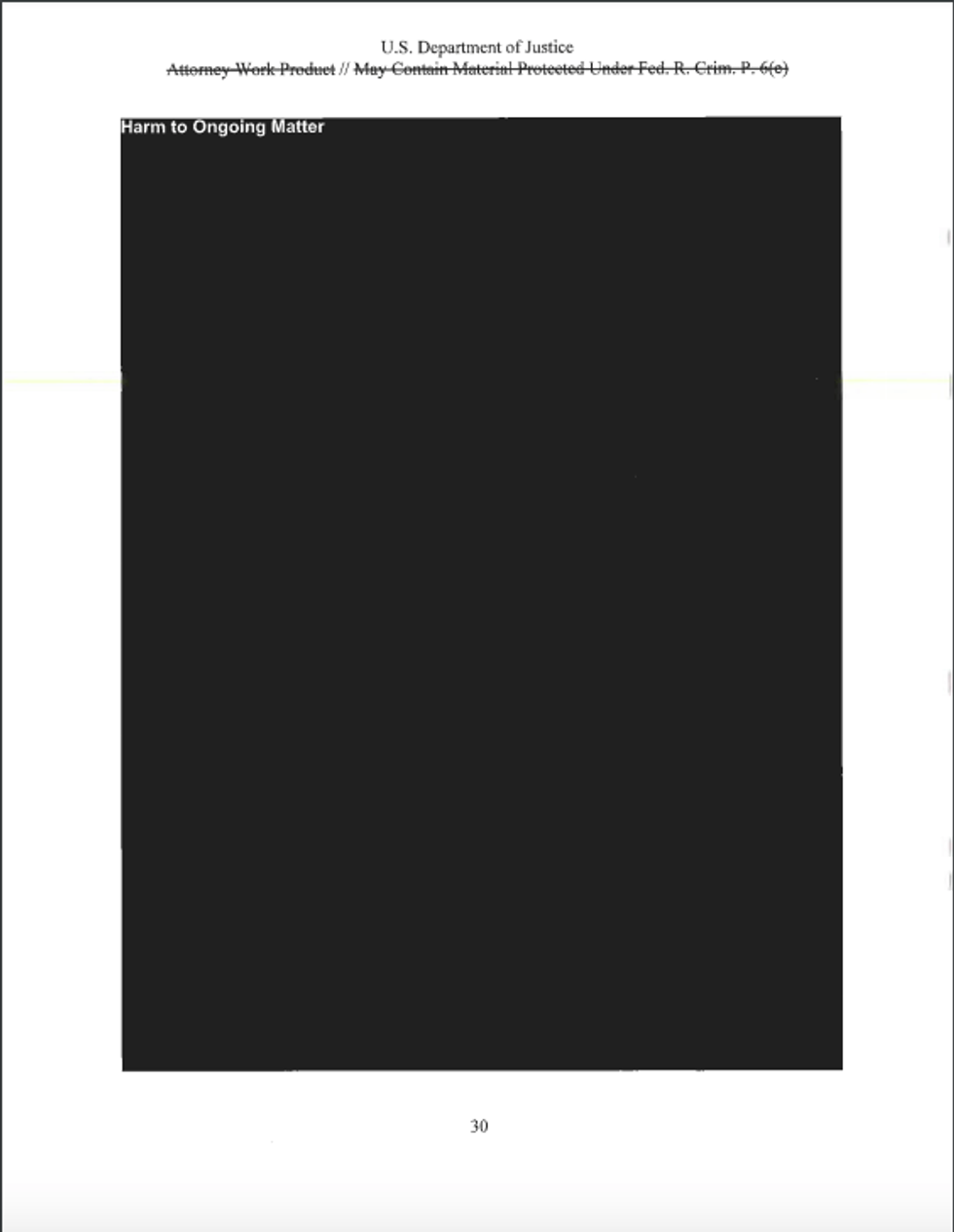 On page 2 of his report, Mueller makes it clear that his investigation was about “conspiracy,” not “collusion”:

In evaluating whether evidence about collective action of multiple individuals constituted a crime, we applied the framework of conspiracy law, not the concept of “collusion.” In so doing, the Office recognized that the word “collud[e]” was used in communications with the acting attorney general to confirm certain aspects of the investigation’s scope, and that the term has frequently been invoked in public reporting about the investigation. But collusion is not a specific offense or theory of liability found in the United States Code, nor is it a term of art in federal criminal law. For those reasons, the Office’s focus in analyzing questions of joint criminal liability was on conspiracy as defined in federal law.

Apart from anti-trust violations, “collusion” isn’t an element of any federal crime. I don’t know how, or when, the term crept into the national discourse and spread thereafter like a disinformation meme.

A writer from the website Lawfare posted an article in June 2018 that traced the use of “collusion” to a July 2016 article published by the Washington Examiner. The term was picked up later the same day by ABC, and in short order was repeated by other media outlets, mainstream politicians and such late-night comics as Trevor Noah.

I think that Mueller, being something of a pedant himself, would offer a brief tutorial on the subject. In any case, he should be asked to weigh in, to help rebut Trump’s claim of “No collusion.”

In the colloquial sense, Mueller discovered a trove of collusion in the form of mutually supportive contacts between the Trump campaign and Russian interests. The report notes, in this respect, that “the investigation established multiple links between Trump Campaign officials and individuals tied to the Russian government.”

As long as we’re talking and writing about Mueller, we owe it to ourselves and our audience to get it right.

It’s very unlikely the Democrats on either House panel will ask this, but the Republicans—Trump quislings all—just might. I urge them to do so, even though Mueller will probably refuse to speculate. In fact, that’s exactly whythe question should be asked.

The impact of Russian interference is and will remain speculative, defying objective quantification. Although a recently released statistical analysis conducted by researchers at the University of Tennessee found that Trump received a bump in the polls that correlated to every acceleration in the Twitter activity of Russian trolls, correlation isn’t proof.

There were many reasons Hillary Clinton lost the Electoral College and the presidency to the most unpopular candidate in the modern history of polling. Russian meddling was one of them. Far more important was the fact that Clinton was a terrible candidate, whom many Americans, desperate for change, associated with decades-old policies that had hollowed out the working and middle classes.

I don’t expect members of either party to have the guts to ask this, as both Democrats and Republicans share a long and ignominious history of engineering invasions, coups and disinformation campaigns aplenty abroad. Neither do I think Mueller would share his thoughts. Still, it’s a vital inquiry that should be pursued.

Mueller’s report famously declares that the special counsel was unable to “exonerate” Trump of obstruction of justice. The report also states that “substantial evidence” was found to support numerous claims of obstruction, including the president’s directive in June 2017 to then-White House counsel Donald McGahn to fire Mueller, and his subsequent demand that McGahn deny that he had ever ordered that Mueller be fired.

Nowhere, however, does the report define “substantial evidence.” The Supreme Court has defined the term as “such relevant evidence as a reasonable mind might accept as adequate to support a conclusion.”

There’s a good probability that Mueller would give another short tutorial, explaining how he used the term. Whatever his response, my next question would be:

Memoranda drafted by the Office of Legal Counsel in 1973 and 2000 establish DOJ policy that a sitting president cannot be indicted. Mueller said on May 29 that he followed that policy.

More than 1,000 former federal prosecutors affiliated with both major parties have signed a statement declaring that, based on the facts disclosed in the Mueller report, they would have charged Trump with obstruction of justice if he were not the president.

Mueller may refuse to say whether he agrees with them. But declining to answer will nicely underscore the significance of the next, and final, category of inquiry:

This is, of course, the elephant in the room. Mueller refers to impeachment in his report 10 times, but only tangentially and mostly in footnotes, without making any assessment of the merits of the case for impeachment.

I would expect him to demur again, which should lead any competent cross-examiner to ask one last question:

By this stage, I’d expect the increasingly cranky ex-Marine to stare icily ahead and, in effect, reply, “It’s your job.”

After the close of the hearing, I’d have one additional question—for House Democrats, rather than for Mueller:

“Are you ready and able to do your job?”

Sadly, unless the Democrats suddenly grow a collective spine, I think we know the answer.