‘This is insane!’ Fox panelist unloads as co-hosts twist themselves into knots to excuse Trump's racism 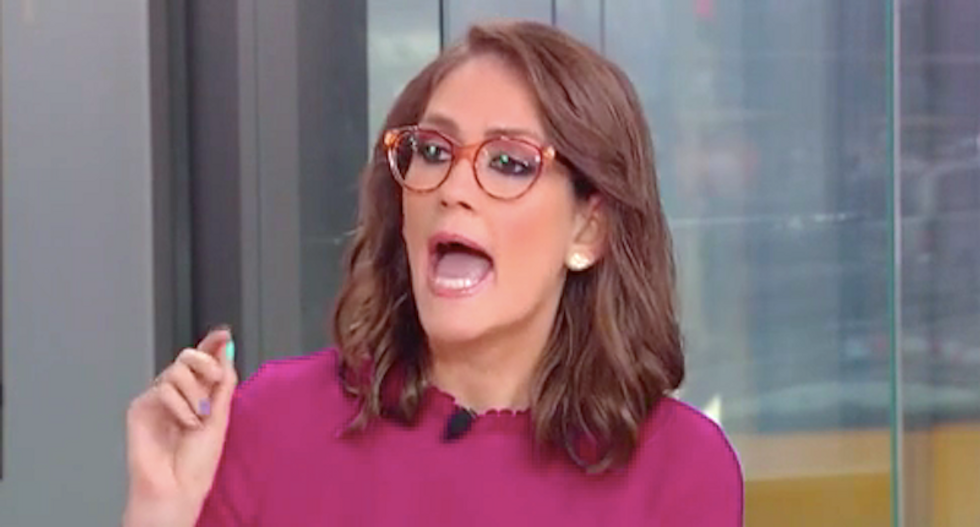 The segment started out tensely, as co-host Dagen McDowell scolded colleague Lisa Boothe for interrupting her with a correction.

"You corrected me once," McDowell said. "You were right, so let's move on."

The panelists discussed a recent Quinnipiac University poll that found slightly more than half of Americans believed the president was racist, although only 8 percent of Republicans agreed, and McDowell said the president's offensive language was a problem only if it helped Democrats gain political traction.

"He can say whatever he wants -- outrageous, offensive, repugnant -- and at some point it might hurt him," McDowell said. "Because, again, we turn to debating personality and not policies that have benefited black Americans, Latino Americans."

Boothe agreed that Trump's economic policies had benefitted black Americans, and she didn't know why the president didn't highlight those successes more -- and Tarlov said they shouldn't even matter.

"He could make those arguments but it won’t change the fact that he is a racist, that he does racist things," Tarlov said.

#FoxNews host Jessica Tarlov called #Trump a racist before her co-hosts could jump in.

"Listen," Tarlov said, "a birther means you are a racist. Telling women of color who are congressional representatives to go back to where they came from, when three of them are Americans from birth, one a refugee who is not a citizen, is racist. Thinking the Central Park Five is guilty even though they have been exonerated, is racist."

Tarlov pointed out that many Trump-backing districts were more deeply mired in poverty than Baltimore, which the president has attacked using racist language, and Faulkner scolded her for name-calling.

"You would agree people can say something and not actually have the name calling," Faulkner said. "You didn’t like it when (Alexandria Ocasio-Cortez) and a staff member did it for Speaker (Nancy) Pelosi. It’s a loaded word."

"You think Nancy Pelosi and Donald Trump are in the same conversation when it comes to that?" she said. "I have sat on this couch and been badgered and pushed to say that Ilhan Omar is an anti-Semite, or that she said anti-Semitic things, or AOC or Rashida Tlaib. People need to be honest about what he is doing."

Faulkner asked if name-calling helped, and said the current political climate reminded her of the situation after unspecified riots in the past.

"Why talk about (Baltimore) as a place that no human would want to live?" Tarlov said. "He doesn’t talk about white districts like that."

Boothe claimed, somewhat inaccurately, that Bernie Sanders had made similar comments about the city, and Tarlov blew up.

"This is insane," she said. "Oh, my god, guys. I will remember this the next time we see 'It’s all about the Benjamins,' and you want me to sit here and talk about Louis Farrakhan."

Boothe perhaps tipped her own hand by saying that Tarlov worked for the Democratic Party.