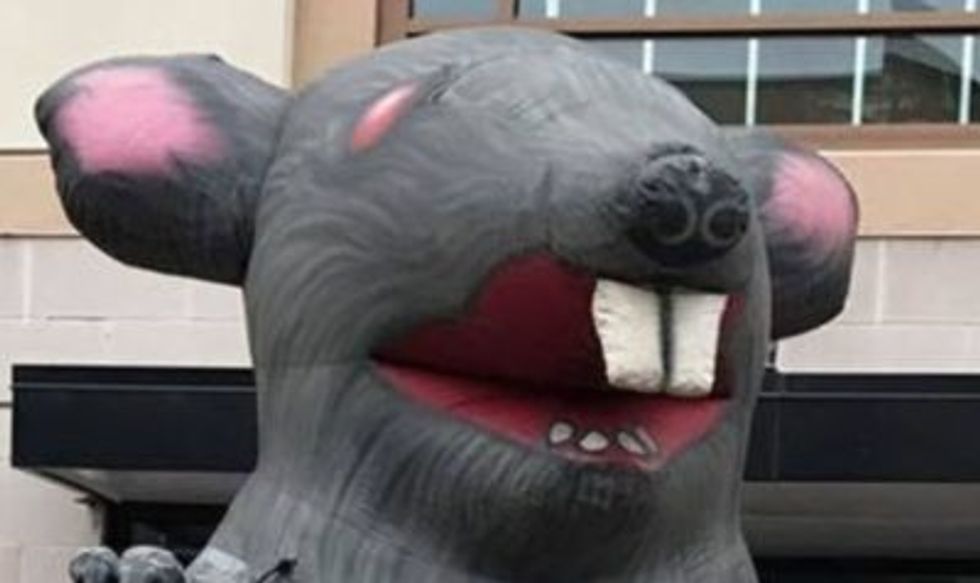 Through a labor board it controls, the Trump administration is trying to kill a beloved union symbol, Scabby the Rat. This latest attack on the First Amendment free speech rights of workers is part of its effort to convert our government’s Department of Labor into the Department of Bad Management.

Sharp-fanged, red-eyed, and scabrous bellied, the giant inflatable rat is in real danger of extermination by Trump, never a friend of labor.

Scabby is one of the most recognizable symbols of today’s enlivened labor movement. Filled with helium, Scabby is visible for blocks at labor protests. Unions fly Scabby in front of unsafe and anti-union company facilities to shame companies into improving conditions for workers and alert consumers to bad businesses.

The Trump administration claims that the inflatable is a menace to business, so harmful that it must be destroyed.

Unions fly Scabby in front of unsafe and anti-union company facilities to shame companies into improving conditions for workers and alert consumers to bad businesses.

Trump claims to be the champion of the Forgotten Man, but his administration is focused on shrinking rights to overtime pay, decertifying unions and moving millions of working people from employees with at least some legal protections into the gig economy as “independent contractors” without even the possibility of union rights.

Team Trump animus to workers is so vicious that it even extends to a potent symbol that the worst employers know draws attention to their cruelty, dangerous policies and exploitation of workers.

Since 1990, Scabby has shown up wherever workers rally and organize and fight for living wages—from Chicago to West Coast wharves to the neon-lit Las Vegas Strip to New York City. Now the Trump-dominated National Labor Relations Board (NLRB) is trying to murder Scabby, establishing that this peaceful expression of free speech rights is effective in advancing the interests of working people.

Union Buster to the NLRB 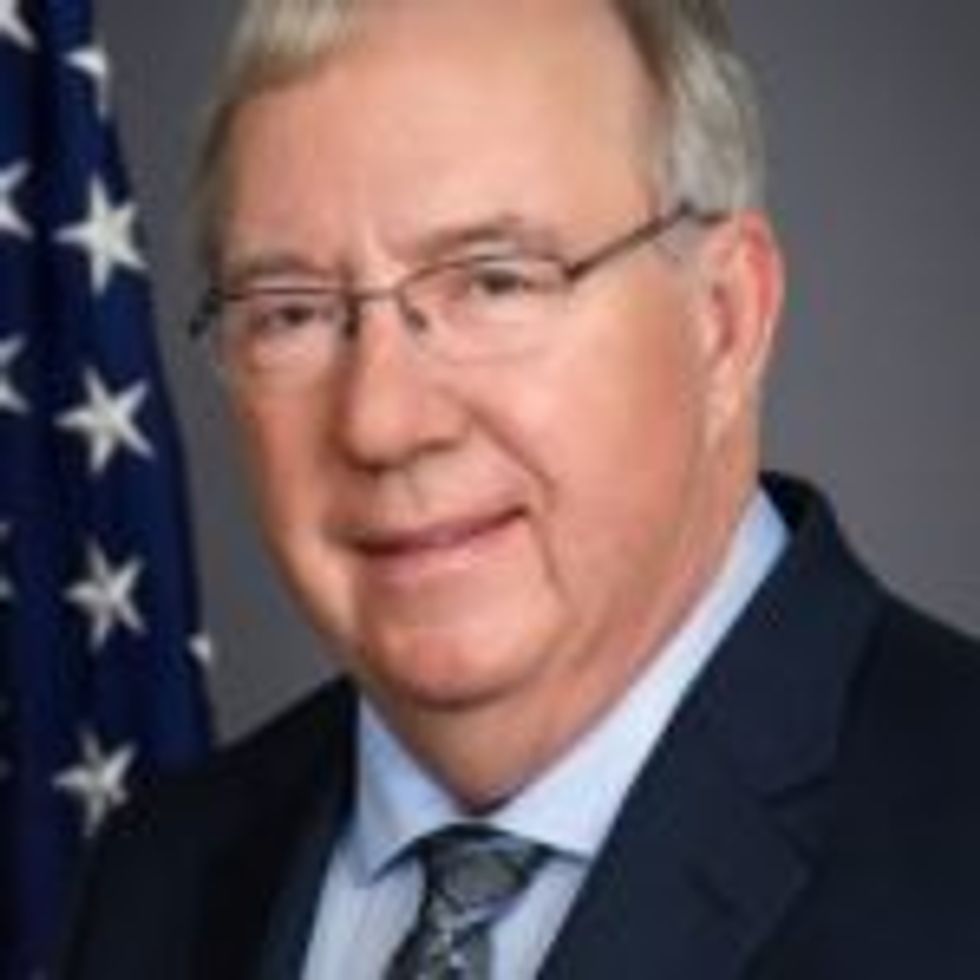 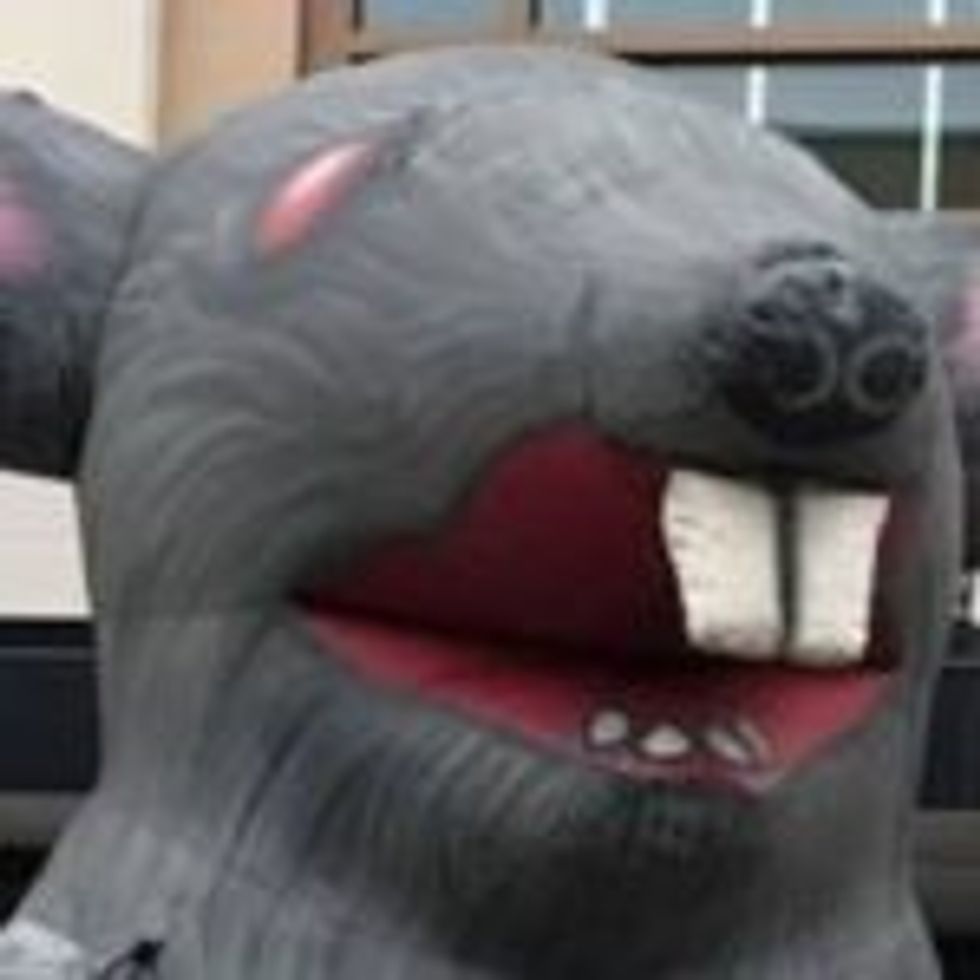 Union leaders have consistently beaten back previous legal challenges to Scabby in state and federal courts. Then Trump named Peter Robb, a partner from the notorious union-busting Proskauer law firm as the NLRB general counsel.

Today when you call the labor board, a recorded message says the agency stands for “your right to join with other employees to improve your wages and working conditions.” But Robb’s mission has been to search out and destroy as many labor-friendly rulings as he can find, Bloomberg reported.

Robb has targeted Scabby since the day he was confirmed in 2017. In July this year, Robb’s office filed a brief calling Scabby “unlawful coercion.” An advice memorandum for the board by his associate general counsel declared it illegal for unions to use Scabby and his inflatable comrades Fat Cat and Greedy Pig to protest unfair employer practices.

The NLRB position was rejected on July 1 by U.S. District Court Judge Nicholas Garaufis. That has not stopped Robb and the Trump majority on the NLRB.

Previous decisions finding labor protests, including a mock funeral, were lawful are under attack. Robb says those cases were wrongly decided, an argument that has a better chance of succeeding now that every ninth serving federal judge is a Trump appointee.

Robb called the cartoon balloons a “coercive” and “unlawful” form of picketing because they create a “symbolic, confrontational barrier to anyone seeking to enter or work.”

But the courts say that is false, ruling that the inflatables are a protected form of free speech, as long as they are stationary and do not obstruct entrances. Robb’s opinion came in a battle over wages at a Chicago construction company, where workers turned around and headed home after they saw the business-suited Fat Cat figure, clutching moneybags and choking a hard-hatted laborer.

“This issue has been litigated for decades because unions and the workers they represent should have effective means to make their case to the public,” Frederick Feinstein, a former NLRB general counsel, told DCReport.

“The inflatable rat never crossed the line of coercion. This is another effort to curtail unions’ effective appeals for public support.”

Feinstein said that when he was general counsel in 1994 to 1999 such an advice memo “would never have been written without my permission.”

“Coercive? Blowing up a balloon is a lot better than throwing a punch! “plain-spoken Chicagoan Peggy O’Connor told DCReport.

She and husband Mike run Big Sky Balloons, which makes the inflatables. “These figures let people know others are upset. They serve a purpose – American free speech. What about the First Amendment of the Constitution?”

The Chicago case was finally settled, but Robb’s memo could now tilt the decision of an NLRB administrative judge on the pending complaint of a supermarket owner about the two Scabby the Rats that appeared outside his Staten Island store.

Scabby will not go to rat heaven peacefully. The NLRB can expect a lawsuit defending Scabby as an exercise of free speech rights and attacking the Trump administration efforts as an attack on the First Amendment, said Richard Weiss of Local 79 of the Laborers International Union of North America.

That union keeps eight of the rats and a giant inflatable cockroach at the ready. “When you walk down the street and see a 12-foot rat, it calls attention to your issues,” he told New York Public Radio station WNYC.

The Laborers Union is also fighting Trump administration efforts to weaken its apprenticeship program. Yes, in his inaugural address promised to look out for the “forgotten man” Trump forgot to mention women.

Trump’s relentless assault on America’s working men and women is also shown by his nominating as Labor secretary Eugene Scalia, son of the late right-wing Supreme Court justice. Scalia is well known as a management lawyer opposing workers’ protections from repetitive stress injuries, helping Sea World evade safety rules after an employee was killed by an orca, and vacating class actions to enforce the Americans with Disabilities Act.

Scalia has also fought Labor Department rules to safeguard workers’ 401(k) savings. Those rules were adopted after our co-founder, David Cay Johnston, exposed how easily corrupt bosses could steal their workers’ retirement savings in award-winning articles in The New York Times. The victims had little success in recovering their money because of weak laws.

As incumbent Jair Bolsonaro faces off a challenge from left-wing former president Luiz Inacio Lula da Silva (known as “Lula”) in Brazil’s October 2 elections, a group of determined Bolsonaro supporters is mobilizing for action, convinced that a communist threat hangs over their country and fiercely defending the sitting president.

In Campo Grande, Rio’s most populous suburb, a line of friends and worshippers has formed in front of a small wooden church, everyone impatient to wish Big Mama – a stout woman with impeccable makeup – a happy birthday. Between a couple of loud laughs and sticky kisses, she says, thrilled: “He sent me a video for my 57th birthday – I’m dying!” “He” is Jair Bolsonaro, her idol, her hero. She sheds tears of joy at the thought of speaking to the president of Brazil, whom she worships – quite literally.An evangelical pastor since the age of 17, Josette Monteiro Marques – better known as Big Mama – preaches both the word of God and that of the Brazilian president in her neighborhood of Campo Grande, a working-class suburb west of Rio de Janeiro. Ever since she was little – and apart from a small hiccup in her 20s when drugs and alcohol kept her away from the divine path for four years – God has sent her daily messages, Big Mama says. He “called” her to campaign for his chosen messiah, Jair Messias Bolsonaro, in 2018. She obliges by publishing regular videos defending the opinions of the far-right head of state for her 178,000 Instagram followers.