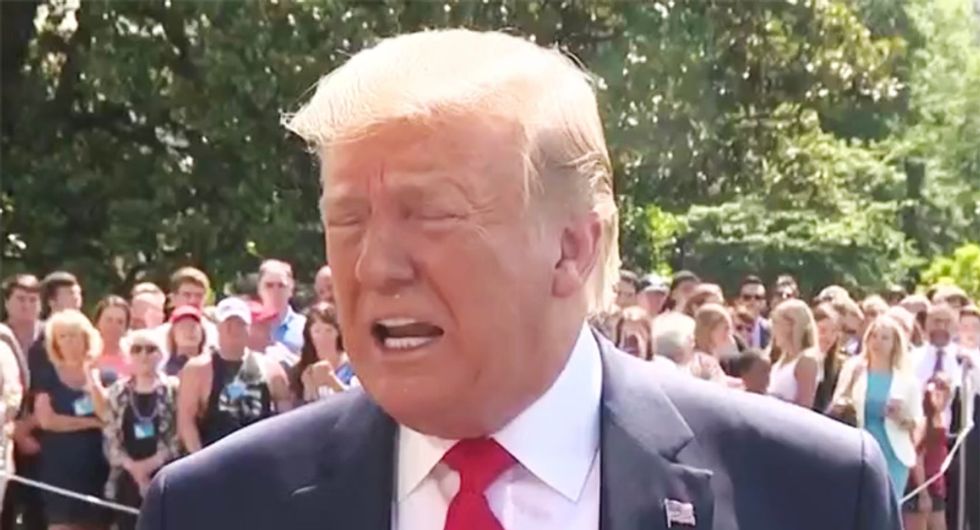 In a rambling press availability on the White House South Lawn, Donald Trump blamed his fumbling speech on July Fourth on the rain creating havoc with his teleprompter, but said it didn't matter because his words would likely create a boost in military enlistments.

Addressing his speech where he claimed U.S. forces reclaimed the airports from the British during the Revolutionary war, Trump blamed the rain and his teleprompter.

"I can just tell you those people that you see, there are a lot of people in front of the White House, every one of them loved it," Trump said. "I would actually say -- and I want to sort of give a little appreciation. The media loved it, they loved the evening."

"We had a lot of rain," he continued. "I stood in the rain and the teleprompter went out it kept going on. And then at the end, it just went out. So I could have said -- and actually, right in the middle of that sentence it went out, and that's not a good feeling, when you're standing in front of millions and millions of people on television and I don't know what the final count was."

After adding, "I do the speech very well," Trump stated, "Despite the rain, it was just a fantastic evening. I think a lot of people -- you know, it was really a recruitment situation. A lot of people are going to be joining our Army, Navy, and Air Force."