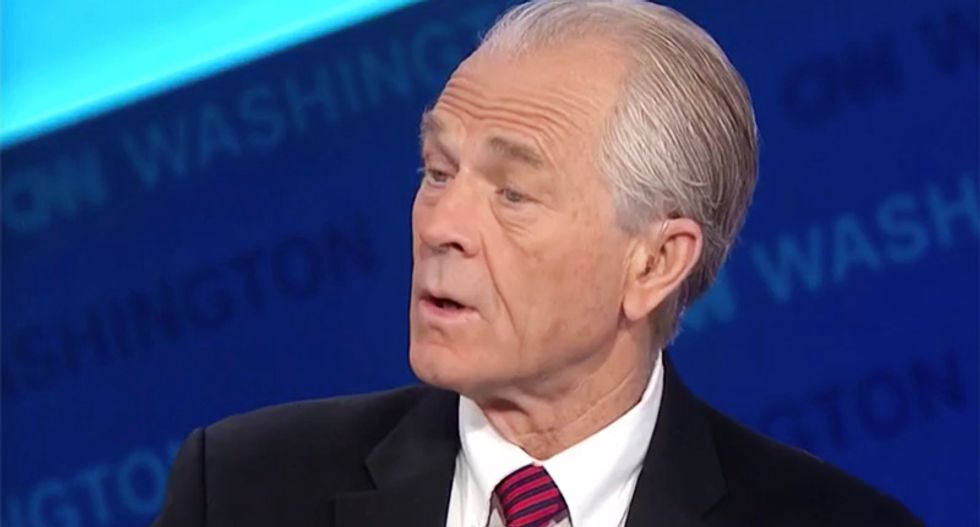 During an appearance on CNN with host Jim Sciutto, one of Donald Trump's top economic advisers attempted to skim over the deleterious effects of the president's trade war by boasting that U.S. companies are moving manufacturing back to the U.S. -- only to be fact-checked by the host.

After spending time ducking questions about the president calling the head of the Federal Reserve "loco," Peter Navarro -- Trump's Director of Trade and Manufacturing Policy -- was asked about the trade wars with Mexico and China that have roiled markets and put some companies on the brink of disaster.

"As you know the president is using tariffs as a cudgel to force concessions from China, but China has domestic politics and neither the Chinese people or leaders are going to want to be seen as bullied by the American president," host Sciutto offered.

According to Navarro, "They [tariffs] are also important insurance policies, they ensure we have continued ongoing good faith negotiations," before adding that trade negotiations going back to President George W. Bush had failed when negotiating with the Chinese.

"Nothing ever happened," he complained. "The tariffs are good at helping increase our growth rate, they're bringing investment to our shores. They're creating jobs for America, supply chains are moving out of China back home."

Host Sciutto then brought him up short.

"On that point, the fact is, yes, you have supply chains moving out of China, not they're not moving back to the U.S. They're moving to places like Vietnam," the CNN host lectured. "How is that helping the American worker?"

"Uh, we have fair trade with other countries," he added before changing the subject and stating that "The American people are solidly behind us," which is also incorrect based upon recent polling showing that Trump's trade policies only have a 37 percent approval rate.