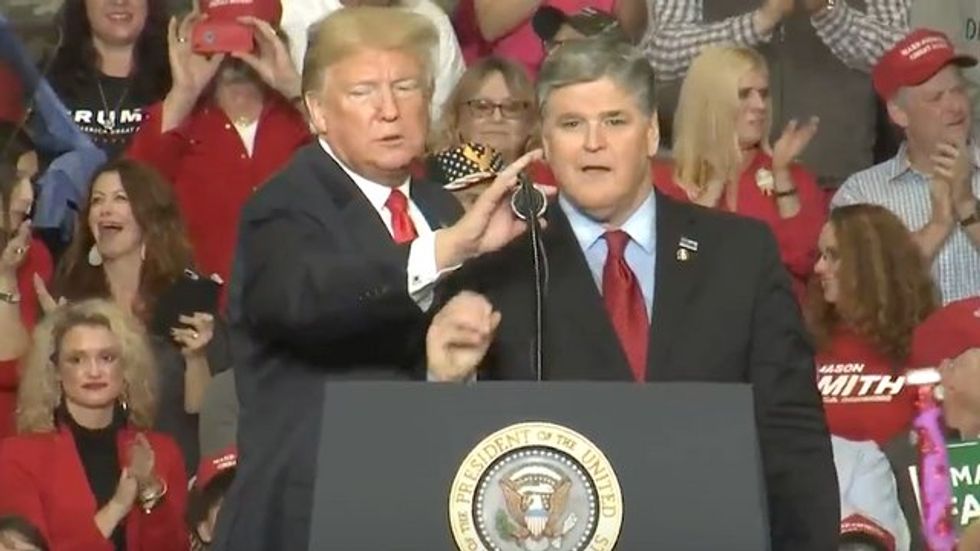 President Donald Trump lobbed racist abuse at four Democratic congresswomen over the weekend -- and his advisers say his addiction to Fox News is at least partially to blame.

The president's advisers have been trying to convince him that outrageous tweets and comments do way more harm than good -- his lowest poll numbers came after his remarks about Charlottesville and after slandering "sh*thole" countries -- but they said Trump has a skewed perception about his popularity with minority voters, reported Politico.

“There’s a certain feedback loop that’s been established of how things are going that may or may not be reality," said one former White House official. "So if he’s watching Fox News all day and gets a certain view of the world, and you combine that with objectively strong economic numbers, you can see why a guy like Trump could convince himself that he’s doing well with minority voters."

Trump's aides and allies were "disappointed he injected himself [in] Dem on Dem violence" commenting on the public feud between the congressional newcomers and House Speaker Nancy Pelosi, but they told new campaign officials to expect more of the same as the 2020 re-election campaign moves ahead.

“Right now, you’ve got a group of people who are relatively new to Trump world who are still of the mind that they can endure stuff like this," said the former White House official. "The only way to preserve your sanity is to understand that wave after wave of people have tried to get [Trump] to do certain things and so you either sign up for who he is or get out while you can."

One former campaign adviser warned that Trump knows Republicans won't challenge him in any meaningful way, so his re-election team better be prepared to put out all the fires the president will set.

“He says these things because he knows he can get away with them,” the adviser said. “No one wants to challenge him because they will end up irrelevant if they do.”