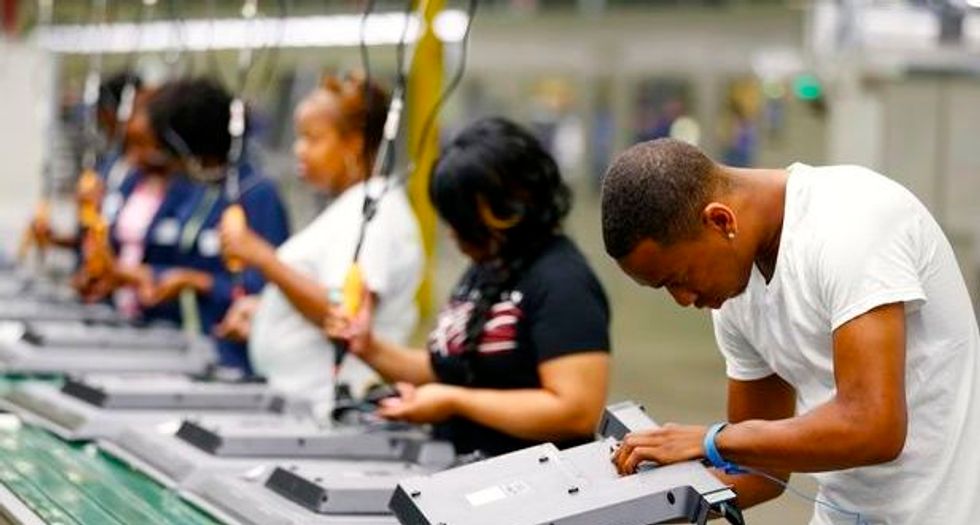 They achieve this by forcing the vast majority of non-union private-sector workers to sign away their rights to go to court or use class or collective arbitration. Instead many millions of workers are being forced to forgo these efficient legal ways to resolve issues and to file individual arbitration claims.

A new report from the Economic Policy Institute and the Center for Popular Democracy says that by 2024 more than 80% of non-union private-sector workers will find courthouse doors chained shut by forced arbitration clauses that ban lawsuits and collective actions. (EPI is a nonprofit, nonpartisan think tank created in 1986 to press the needs of low- and middle-income workers in economic policy discussions.)

Hardest hit will be women, African-Americans, immigrants and low-wage workers as bosses compel employees to sign forced arbitration clauses to keep their jobs. The dense legalese giving up these rights is often hidden deep in the fine print of job application forms and new-hire paperwork, says the report titled “Unchecked corporate power: Forced arbitration, the enforcement crisis and how workers are fighting back.”

Enforcement of these clauses was validated by the Supreme Court in the Epic Systems v. Lewis decision. Trump appointee Neil Gorsuch provided the decisive vote and wrote the majority opinion in the May 2018 decision.

The 5-4 Epicruling lets individual arbitration clauses and waivers of collective action trump the 1935 National Labor Relations Act. That New Deal law gives workers the right to “concerted activities for the purpose of collective bargaining or other mutual aid or protection.”

The high court decision shows how Donald Trump, who campaigned as a champion of workers and whose inaugural address promised to always look out for the “Forgotten Man,” has used his powers to hurt workers. His campaign speeches, read carefully, show his concern for corporations and profits and his love of tariffs more than workers.

No Right to Sue

According to an earlier EPI study, 56% of workers had already lost their right to sue their employers when the Trump court’s Epic decision intensified the trend, kicking off “a surge in corporate use of forced arbitration.”

Lower courts had split on the issue. By nominating Gorsuch to the Supreme Court, Trump swung the weight of the government toward management. Although the National Labor Relations Board had previously backed workers’ rights to collective action, Trump’s appointees gave it a new Republican majority.

The labor board also got a new, and anti-labor, general counsel, Peter Robb, a former partner at a Philadelphia union-busting law firm who promptly issued an amicus curiae brief supporting the employers’ position in the case. Robb has started a hunt for pro-labor rulings that can be overturned, Bloomberg reported in May.

The forced arbitration clauses backed by the Epic decision may let management select the arbitrators, crimp the amount of relief they can grant, and impose daunting fees and short filing periods on workers. No wonder businesses win the overwhelming majority of arbitration cases and when workers do win their awards are small. This individual arbitration process bears no resemblance to the voluntary bilateral arbitration used to resolve grievances, disputes under collective bargaining agreements and disciplinary issues in unionized workplaces.

At an Applebee’s in Bend, Ore., managers regularly forced Mike Swisher and his coworkers to work off the clock without pay. When he went to the Northwest Workers’ Justice Project for help, he discovered that among the paperwork required for the job they had signed an arbitration clause banning class actions. Thus the employees have been unable to recover any of the pay they are owed and Applebee’s has not been held accountable for the wage theft.

Mike is not alone: 93% of the workers who sign forced arbitration clauses don’t realize they are giving up their right to sue, the Center for Popular Democracy found.

Amy, an immigrant from Vietnam who does manicures and fingernails, was paid below the minimum wage for working 11 hours a day, seven days a week in suburban Seattle. She often saw a manager inappropriately touching her coworkers. Construction worker Carlos Jiménez suffered wage theft totaling $10,000 in Queens, N.Y.

Mike, Amy and Carlos are among the many workers whose stories of unremedied injustice were collected by the center.

Forced arbitration regimes already ban 60 million U.S. workers from protecting their employment rights through the judicial system. The practice is more prevalent in low-paid jobs, with an estimated two thirds of low-wage employers blocking the courthouse doors. The industries that use such tools to deny justice disproportionately employ women and African-Americans.

With the deck stacked against them, an estimated 98% of workers who would otherwise go to court give up the effort when their only option is forced individual arbitration, according to the report. In the banned class and collective actions, workers aggregate their claims and make litigation cost-effective, and under union contracts, management is often required to bear half the cost, but individual arbitration cases and lawsuits are unrealistic for most working people.

Corporate use of forced arbitration combines with cutbacks at enforcement agencies to severely erode workers’ rights. Budget cuts have left state and federal worker protection agencies that deal with race and gender discrimination, safety abuses and wage and hour violations underfunded and understaffed.

Enforcement divisions of the U.S. Labor Dept. lost $9.6 million in the last seven years alone during a time when the number of workers they are responsible for grew by 13 percent. The number of workers per federal wage and hour inspector has climbed to 175,000, more than double the ratio in the 1970s. Employees per safety and health compliance officer tripled.

Fightback legislation to override Epic Systems has been introduced in the House of Representatives by Hank Johnson, a Georgia Democrat. Sen. Richard Blumenthal, a Connecticut Democrat, introduced a companion Senate bill.

The Restoring Justice for Workers Act would prohibit mandatory arbitration and class action waivers in labor disputes and the Forced Arbitration Repeal Act would eliminate the clauses in employment, consumer and civil rights cases. Neither bill is likely to pass the Senate, however, and even if it did the White House would be opposed.

State “whistleblower enforcement laws” introduced in Oregon, Washington, New York, Vermont, Massachusetts and Maine and modeled on California’s Private Attorney General Act would let workers sue law-breaking employers on behalf of the state and all injured employees, even if they are covered by forced arbitration clauses, with penalty proceeds split between workers and underfunded state enforcement agencies.

During her speaking time, Boebert mentioned that American taxpayers were "defrauded a possible $560 billion as a result of the federal government's negligence in carrying out these federal COVID relief funding programs."