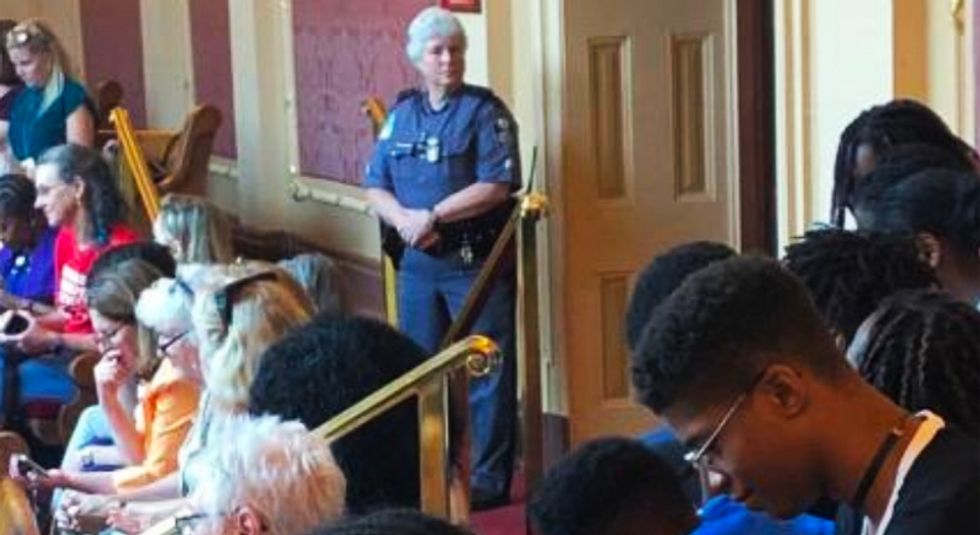 A guard serving the lawmakers in the Virginia statehouse is under investigation after she reportedly grabbed a black teen and made him stand for the Pledge of Allegiance against his wishes, reports the Friendly Atheist.

As Hemant Mehta notes, "Dozens of young African Americans, members of a local Boys & Girls Club, were in the gallery to encourage lawmakers to take action on guns and witness the proceedings. When the Pledge of Allegiance was recited at the beginning of the session, one of the boys, Jae Hutchinson, chose to respectfully protest by remaining silent and seated."

At that point, an observer in the gallery saw a white guard on the floor grab Hutchison and "tug" him to his feet.

"I’m sitting in the senate gallery of Virginia. I just witnessed a female state trooper force a young black male to stand for the pledge. She physically touched him and pulled on him. That is not legal. That is assault," tweeted a Twitter user called @SatirclAlx.

She also noted, "2) She didn't just ask him to stand. She touched him. More than once. A tap on his shoulder then a tug on his shirt. I was just about to go over to her when he stood. It infuriated me."

Hutchison's mother confirmed the grabbing, writing on Facebook : "This happened to my oldest son Jae today😔. My son chose to sit and not say the Pledge of Allegiance. We have discussed it, my boys and I, they understand why we silently protest. I sit during the Pledge and Anthem to silently protest this very thing. My son made the choice to exercise his RIGHT to sit and silently protest. She violated him, and he is hurt by it."

"I was in the House Gallery and he was in the Senate Gallery. He told me afterwards he didn't want to make a big deal about it right then because he did not want to negatively impact the Club or the other kid's experiences today. I told him I would report it tomorrow....My son suffered in silence bc he was thinking of others before himself. Make no mistake, I am LIVID!!! She had NO right forcing him to stand."

In a photo posted to Twitter (which can be seen below) the guard can be seen glaring at the teen as he looked at his phone.

Thursday morning, @SatirclAlx. tweeted, "A state senator told me that the young man in the pledge incident in the VA Senate gallery and his mom and Senator are meeting with the capitol police chief this morning. I’m confident they’ll fix this so it won’t happen again," before adding, "Oh...and irony...the capitol police officer who accosted the young man was actually the one breaking pledge protocol. You’re not supposed to walk or otherwise move about during the pledge of allegiance. A military officer schooled me on that."