WATCH: Acosta gives a cryptic response when asked if Jeffrey Epstein is an intelligence asset 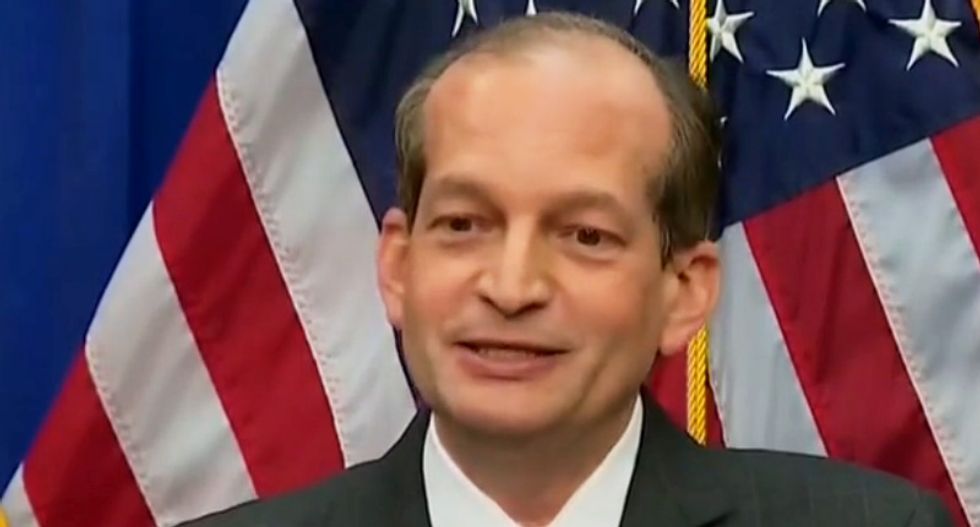 Secretary of Labor Alexander Acosta on Wednesday refused to confirm or deny that financier and convicted sex offender Jeffrey Epstein was an intelligence asset.

"So there has been reporting to that effect and let me say, there’s been reporting to a lot of effects in this case, not just now but over the years and, again, I would hesitant to take this reporting as fact," Acosta said during a press conference.

"This was a case that was brought by our office, it was brought based on the facts and I look at the reporting and others, I can’t address it directly because of our guidelines, but I can tell you that a lot of reporting is going down rabbit holes."

According to investigative reporter Vicky Ward, Acosta told members of Trump’s transition team that he was instructed to “back off” of Epstein a decade ago because Epstein "belonged to intelligence."

On CNN Monday, Washington Post reporter Emma Brown walked through the legal implications of far-right activist Ginni Thomas, husband of Supreme Court Justice Clarence Thomas, reaching out to Arizona lawmakers to try to get them to overturn the 2020 presidential election.

"What these emails show is that she wasn't just, you know, saying what she thought publicly, but she was part of a strategy, you know, she was taking an active role in this strategy to pressure state legislatures in the key swing states to basically disregard the popular vote, set that aside, and choose their own electors, choose Trump electors to help him stay in office," said Brown.

According to a report from the New York Times, former vice president Mike Pence is headed down to Georgia on Monday to rally voters for Gov. Brain Kemp (R) knowing full well that it will anger his former boss, Donald Trump.

What makes his decision even more notable is that Kemp -- despite Trump's endorsement of challenger David Perdue -- is expected to win the nomination with ease, according to the most recent polls, making Pence's visit more about separating himself from the vice president than providing a boost to the incumbent governor.

The House Select Committee investigating the January 6th Capitol riots will hold six public hearings next month to reveal evidence that Donald Trump and his allies broke the law in their efforts to overturn the 2020 election results.

A draft schedule shows the first and last of those hearings would be staged in television prime time, and the panel's attorneys will explain the unlawful scheme by the former president and his allies to reverse his election loss up to and including the Jan. 6 insurrection, reported The Guardian.