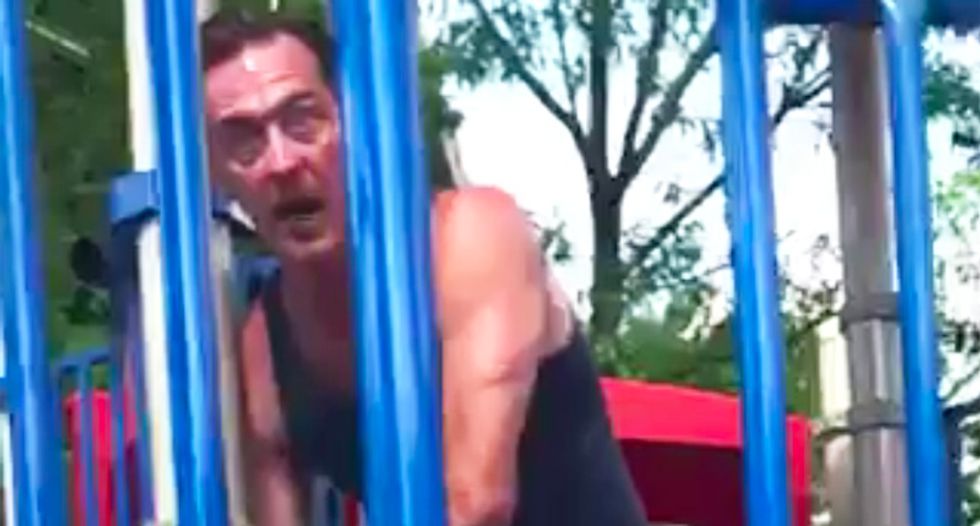 In a Facebook video clip noted by The Root, a Pittsburgh man goes on a raging expletive-filled rant after he attacked a 13-year-old black child at a Pittsburgh playground after accusing the teen of committing vandalism.

According to the report, Shalayla McGovern -- who posted two videos on her Facebook page-- explained that her 13-year-old son had gone to a park to retrieve his sister's phone charger where he was confronted by a man, now identified as Thomas D’Andrea, who accused the teen and a friend of vandalism before hitting him.

“So he got upset, ran across the street and ran up to my son and basically said: ‘I’m gonna give you a head start, you better run,'"McGovern told the Root in an interview. "My son was like ‘What? What are you talking about?’ Then he punched my son in the mouth. So my son hit him back."

“He got upset because my son hit him back. He thought that because he was an adult he could put his hands on someone and the child wasn’t gonna do anything. The next thing you know, they’re on top of the slide. He pins my son down, threatens my daughter," she continued before adding, "Thankfully my daughter had enough sense to record it.”

In the video, McGovern's daughter pleads with D'Andrea to get off of her brother as he insists he will hold the boy until the police come, before taunting the onlookers and then going on a profanity-laden tirade.

According to the Root, D'Andrea has a reputation for bullying teens, with locals saying he has been known to harass kids in the mostly white neighborhood.

The report notes that police did show up too late, but that D'Andrea has been charged with assault after doctors took a look at the 13-year-old boy after he was taken to a local hospital.

You can see the video below via WPXI: