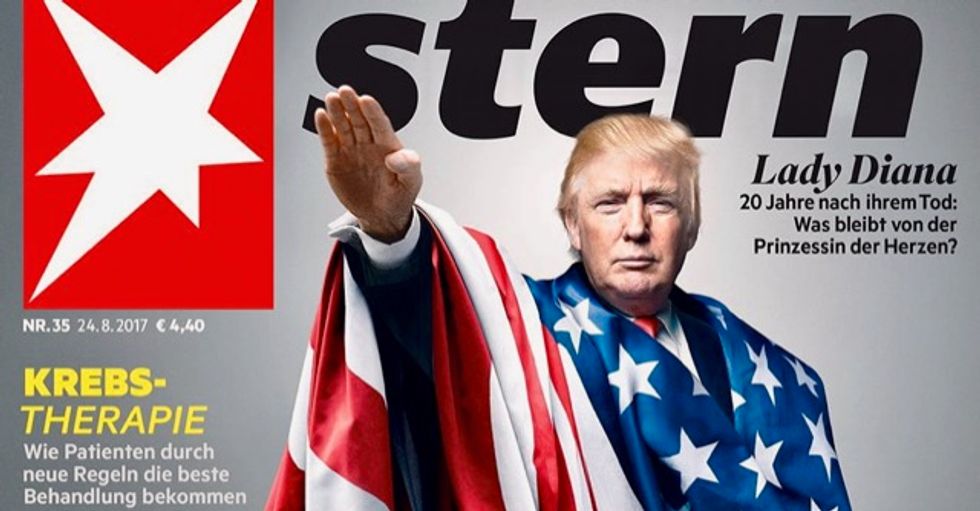 Donald Trump on Cover of Stern Magazine Image via Facebook

Just months after Donald Trump was sworn in as President, a drawing of the nascent American president was featured on the cover of a top German magazine. Trump was painted as draped in the American flag, and giving a Nazi salute. That chilling August 2017 edition of the German weekly magazine, Stern, received tremendous international attention.

"His fight! Neo-Nazis, KU-Klux Klan, racism: How Donald Trump is protecting hate in America," is a Facebook-generated translation of the cover story's title.

Over the weekend, the cover made a comeback, going viral – at least on social media.

Saturday evening, Pulitzer prize winning journalist Laurie Garrett tweeted out the cover, mistakenly noting it as current, and saying, "Germans know fascism when they see it."

Shortly thereafter popular actor, director, and activist Ken Olin decided to tweet out a copy of the Stern cover, writing, "If he acts like a Nazi, Sounds like a Nazi, And Germany’s top magazine calls him a Nazi..."

Despite the cover being two years old, their tweets drew a lot of attention.

As did many others. A small sampling: