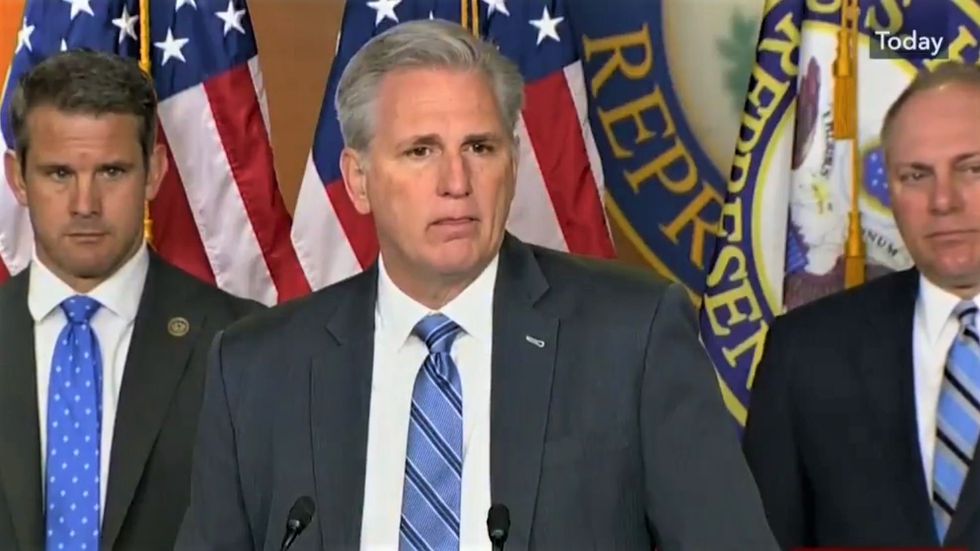 In a scathing column for the Washington Post, journalist Dana Milbank lambasted GOP lawmakers for their cowardice when it comes to calling out Donald Trump for his overt racism.

"Republican lawmakers have long cut profiles in cowardice during the Trump presidency, but never before have the consequences of their leadership vacuum been as vivid," Milbank began before adding, "When Trump himself said a few days earlier that four nonwhite members of Congress, including three born in the United States, should 'go back' to the countries they came from, Republican lawmakers responded with near-complete silence."

According to the columnist, "Even after the grotesque display at the rally (Trump, who later distanced himself from the chant, could be seen savoring it at the time), Senate GOP leader Mitch McConnell (Ky.) said 'the president is onto something.'"

Milbank then suggested, "The lawmakers’ behavior is, in a way, worse than Trump’s."

"He has long demonstrated that he has no sense of propriety — only an instinct for the expedient. We can expect no more of him," he charged. "The real injury comes when elected officials who know better nod and wink at Trump’s behavior, thereby signaling to the public that it’s acceptable."

Pointing at former House Majority Speaker Paul Ryan (R-WI) as the very model of a spinless Republican unwilling to stand up to a bullying Trump, Milbank said the members of the party have adopted Ryan's posture of looking the other way.

"The Republicans remain silent. And Trump hijacks the Fourth of July. And recalls how Revolutionary War soldiers 'took over the airports.' And pronounces himself once again to be a 'stable genius.' And threatens to defy a Supreme Court ruling before reversing himself. And bids farewell to his ninth Cabinet officer — a modern record — in yet another scandal," Millbank wrote, adding, " And now launches a racist attack on dark-skinned members of Congress."

"So it will continue. Republican lawmakers made their choice to give Trump their tacit approval. The ugliness in North Carolina is what happens when leaders become mere followers," he lamented.