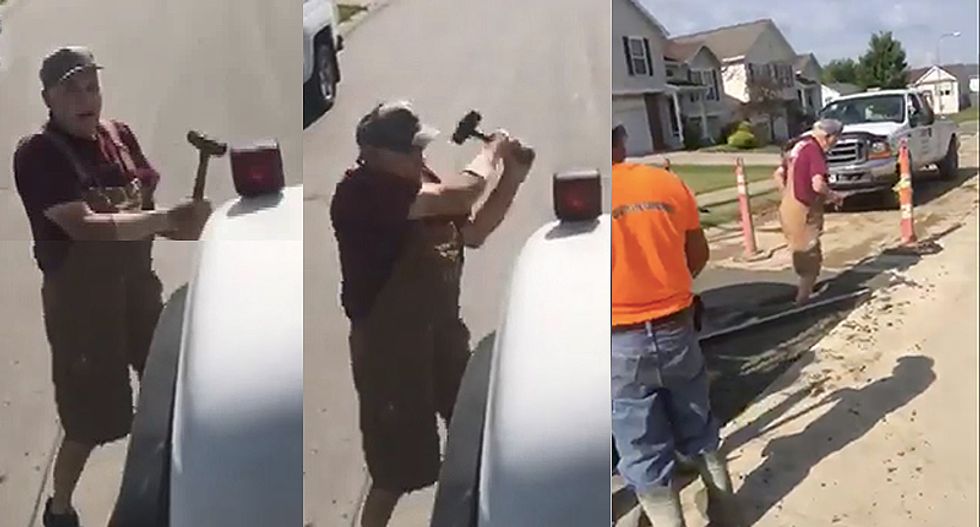 One 70-year-old Omaha, Nebraska man took "get off my lawn" to a whole new level this week.

The Omaha World-Herald reported that a man was furious that a pickup truck had parked partly on the grass in front of his house. So, he took a knife to the truck's tires, smashed the lights out of a cement mixer that was parked across the street and then stomped through the freshly poured concrete. The workmen were repairing the road in front of the man's house.

Crew members filmed the incident on a cell phone camera.

"You got this? You ready?" the elderly man is seen on the video before attacking the cement mixer. He's shown in brown overalls and a red shirt and cap. He has since been identified as Thomas Mailander, who has been ticketed in the past for criminal mischief.

"Everything all right?" asked Kerry Jackson, a co-owner of Jackson's Complete Concrete.

"Everything all right? Does everything look all right you dumb f*ck? I want that truck off my lawn," Mailander replied.

Jackson said he wasn't sure who owned the truck. He later found out who the owner was, but it was a son visiting his mother who lived across the street. It had nothing to do with the workmen.