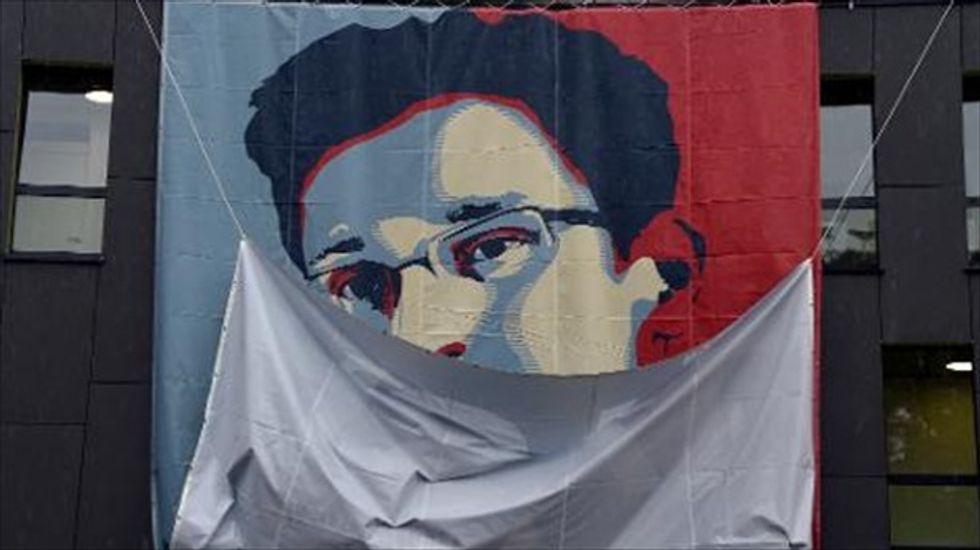 Art students uncoil a placard showing US intelligence leaker Edward Snowden as part of a campaign by German activists to grant asylum for Snowden on June 5, 2014 [AFP]

"The White House is calling for reauthorization of a program that security agencies have used to spy on innocent people, violate their privacy, and chill free speech."

Civil liberties groups and privacy advocates raised alarm Thursday after the Trump administration called on Congress to reauthorize an NSA mass surveillance program that was exposed by whistleblower Edward Snowden.

The New York Times, which obtained the Trump administration's request to Congress, reportedthat "the administration urged lawmakers to make permanent the legal authority for the National Security Agency to gain access to logs of Americans' domestic communications, the USA Freedom Act."

"It's long past time that this surveillance program was shuttered once and for all."

"The law, enacted after the intelligence contractor Edward J. Snowden revealed the existence of the program in 2013, is set to expire in December, but the Trump administration wants it made permanent," according to the Times.

The administration claimed in its letter to Congress—which was signed by outgoing National Intelligence chief Dan Coats—that the NSA has suspended the spying program, but Free Press Action government relations director Sandra Fulton said in a statement that this "should give little comfort to those whose privacy rights are routinely violated by authorities."

"The White House is calling for reauthorization of a program that security agencies have used to spy on innocent people, violate their privacy, and chill free speech," said Fulton. "The NSA program permits the mapping of relationships among members of marginalized communities and distant associates of targeted individuals, even when most individuals in those communities were never suspected of wrongdoing."

"Historically, authorities have used such overbroad authority to harass members of these communities," Fulton added, "especially those who speak out when their rights are under threat."

"It's long past time that this surveillance program was shuttered once and for all," Toomey told the Times. "The NSA has been vacuuming up hundreds of millions of Americans' call records as part of a program that is hopelessly complex and lacks any discernible evidence of its value. We should not leave such a sweeping, unaccountable power in the hands of our spy agencies."