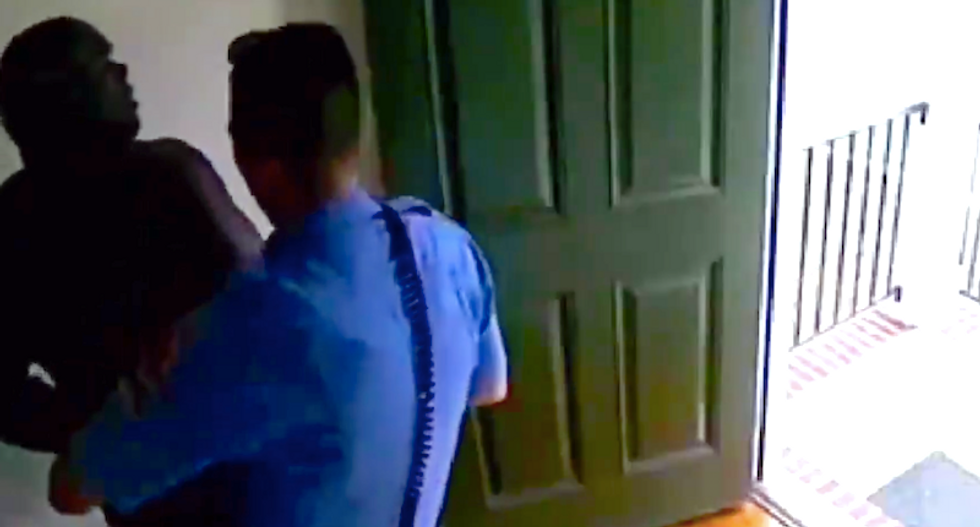 Kazeem Oyeneyin detained in his own home

A black North Carolina man was handcuffed in his own home, while wearing only underwear, after police mistook him for a burglar during a false alarm call.

Kazeem Oyeneyin said his home security system has gone off by mistake previously in the five years he's lived in his north Raleigh home, but he said police usually confirm he's the homeowner by checking his ID and then leaving, reported WTVD-TV.

However, last week Oyeneyin was taken into custody at gunpoint, while wearing boxer shorts, after the alarm was unwittingly tripped by mistake by a friend who was leaving after spending the night.

Oyeneyin disengaged the alarm and went back to sleep, but was awoken a short time later by police pounding on the door.

"I just laid back down and all I heard was somebody screaming downstairs," he said. "So I grab my firearm because I don't know what's going on, and I run down the stairs and it's a cop."

Oyeneyin, who has a concealed carry permit, told police he had a gun in his hand, and officers ordered him to drop the weapon, and a video recording shows he immediately complied.

The 31-year-old party and hip-hop concert promoter said police refused to believe he lived in the home, and ordered him outside.

"What you mean come on out?" Oyeneyin told police. "I got on my drawers!"

Oyeneyin did come outside in his underpants, and police ordered him to his knees with his hands behind his back.

The homeowner told police he had identification that verified he lived there, and he asked for a supervisor at the scene.

Four other Raleigh police officers arrived, and they escorted a handcuffed Oyeneyin, still wearing only underpants, to a patrol car.

"What have I done wrong?" Oyeneyin said. "I have nothing wrong."

Oyeneyin told the TV station the incident was one of the most humiliating experiences of his life, and he wants an apology from police for racially profiling him.

"Being black could definitely be one the issues, the problem," he said. "I hope it's not. But if that's what it is, it needs to be resolved."

The police department said in a statement that the incident remains under investigation.