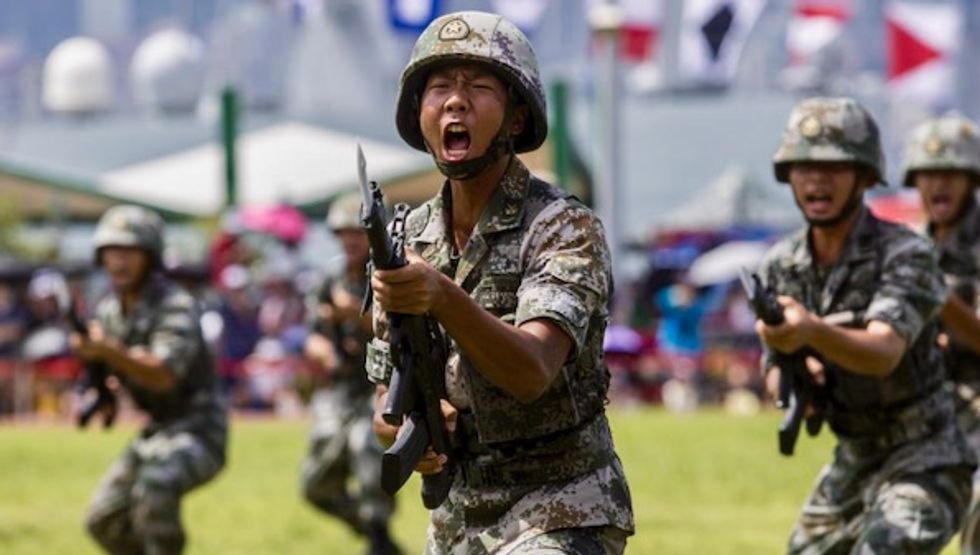 China warned Thursday that it will not "sit by and watch" the unrest unfolding in Hong Kong, as US President Donald Trump expressed concern over the risk of a violent response to pro-democracy protests.

Trump urged his Chinese counterpart Xi Jinping to meet with demonstrators, while US National Security Advisor John Bolton warned Beijing against creating a "new" Tiananmen Square in Hong Kong, referring to the deadly 1989 crackdown on protesters in Beijing.

The weeks-long Hong Kong protests were sparked by opposition to a plan to allow extraditions to the mainland, but have since morphed into a wider -- sometimes violent -- call for democratic rights.

The movement represents the greatest challenge to Beijing's authority since the city was handed back by the British in 1997 under a deal that allowed it to keep freedoms that many Hong Kongers feel are being eroded.

Images taken by AFP on Thursday showed thousands of Chinese military personnel waving red flags and parading at a sports stadium in the city of Shenzhen, just across the border from Hong Kong.

Dozens of armored personnel carriers and supply trucks were also parked nearby.

Chinese state-run media reported this week that the elements of the People's Armed Police (PAP), which is under the command of the Central Military Commission, were assembling in Shenzhen.

China's ambassador to London, Liu Xiaoming, said Thursday that Beijing would not "sit by and watch", warning that his government had "enough solutions and enough power to quell the unrest swiftly".

Analysts have said the potentially catastrophic economic and political consequences will deter Beijing from any overt boots-on-the ground intervention in the global financial hub.

Trump urged a peaceful solution on Thursday, telling reporters that he is "concerned" over a possible crackdown and saying that if Xi "sat down with the protesters... I'll bet he'd work it out in 15 minutes."

Trump added: "I know it's not the kind of thing he does."

The US president also said he would be speaking with Xi "soon."

In an interview with VOA News published Thursday, Bolton said that "people in America remember Tiananmen Square," warning China that "it would be a big mistake to create a new memory like that in Hong Kong."

The previous day, Trump linked a possible trade deal with Beijing to a peaceful resolution to the political unrest that has roiled the semi-autonomous Chinese city for 10 weeks.

"Of course China wants to make a deal. Let them work humanely with Hong Kong first!" Trump tweeted, in the first clear indication that the trade deal could be threatened by how Beijing reacts to the protests.

Activists are planning another series of mass rallies this weekend in a bid to show their cause still maintains broad public support despite violent scenes during a disruptive occupation of the airport.

On Tuesday, chaos erupted at one of the world's busiest transport hubs when protesters physically stopped travellers from boarding flights, battled riot police and assaulted two men they accused of being Chinese infiltrators.

Beijing -- which has refused to grant any concessions to the protest movement -- has seized on the airport violence, with state-media churning out a deluge of condemnatory articles, pictures and videos.

Until the airport protest, hardcore demonstrators had largely focused their anger towards the police, or state institutions such as the city's parliament and Beijing's main office in the city.

The chaotic airport scenes have prompted some soul-searching within the largely leaderless movement over whether that violence has undermined their cause.

The economy, already battered by the trade war, has also been affected. The city's financial chief Paul Chan on Thursday predicted a meagre zero to one percent growth for the year.

AFP / Nicholas Kamm Donald Trump has previously taken a hands-off approach to the Hong Kong protests, but waded in on Twitter after increasingly coming in for criticism at home

Trump's comments on Hong Kong appeared to signal a change in his approach to events in the city.

He has come under fire from both sides of the political aisle for shying away from the issue, avoiding criticising Beijing even as he cited US intelligence reports of Chinese forces moving to the territory's border.

China has portrayed the protests as a foreign-funded attempt to destabilise the motherland rather than a popular revolt against its policies.

Washington and Beijing have imposed tariffs on $360 billion in two-way trade, but Trump has delayed tariffs on electronic goods from China, giving investors hope for a detente in the trade conflict.

The introduction of Hong Kong as a potential bargaining chip in those talks could produce a further wrinkle.