CNN anchor says Trump is ‘arsonist-in-chief’ on the economy: ‘Start practicing your stop, drop and roll’ 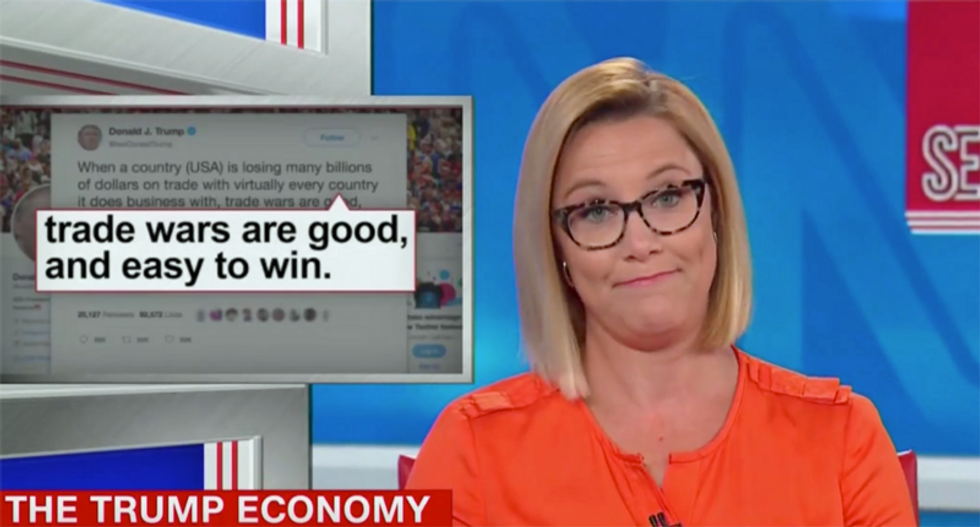 "If it feels like the world is on fire, that’s because it literally is," Cupp said. "New reports that yesterday a U.S. plane made its way to South America to help local authorities fight the massive fires ripping through the Amazon, the world’s largest rain forest."

"The Brazilian President Jair Bolsonaro finally caved to global pressure to authorize the country's military to assist in putting the fires out. That afterBolsonaro initially accused his critics of intentionally starting the fires -- to make him look bad," she said. "Chaos, delayed action, conspiracy theories, sound familiar?

"Well, here at home, there are metaphorical fires to put out, too" she continued. "President Trump lit a blow torch to the U.S. economy this week, shortly before leaving for France for the G7 economic summit."

"Despite grim predictions by economists and experts that our rocket economy could be in for some trouble, thanks to steelworker job cuts, wild deficit increases, an escalating tariff war and more — Trump spent the week insisting it is all the Fed’s fault," Cupp said.

"Yesterday, on the eve of the first day of the G7, not coincidentally, China called Trump’s bluff, announcing $75 billion in new tariffs on U.S. goods. In response, Trump went on a Twitter tirade 'hereby ordering' American companies to leave China and implying his own Fed Chair is a bigger enemy than China's president," she reported. "Right after that, the stock market plummeted, eventually dropping by over 600 points. So naturally, Trump announced more tariffs on China, because that will fix it."

"Here is tonight’s headline. Better start practicing your stop, drop and roll, because the arsonist-in-chief is just getting started," Cupp warned.

"You can sense his desperation, his panic," she said. His own aides inside the White House warn of increasingly erratic behavior."

"Like what you ask?" Well, there was the tantrum over not being able to buy Greenland, suggesting that he would buy Greenland in the first place. Implying he might just be the second coming of God. Changing his stance on gun control three separate times. Daring his fed chair to resign," Cupp said. "That is all just this week."