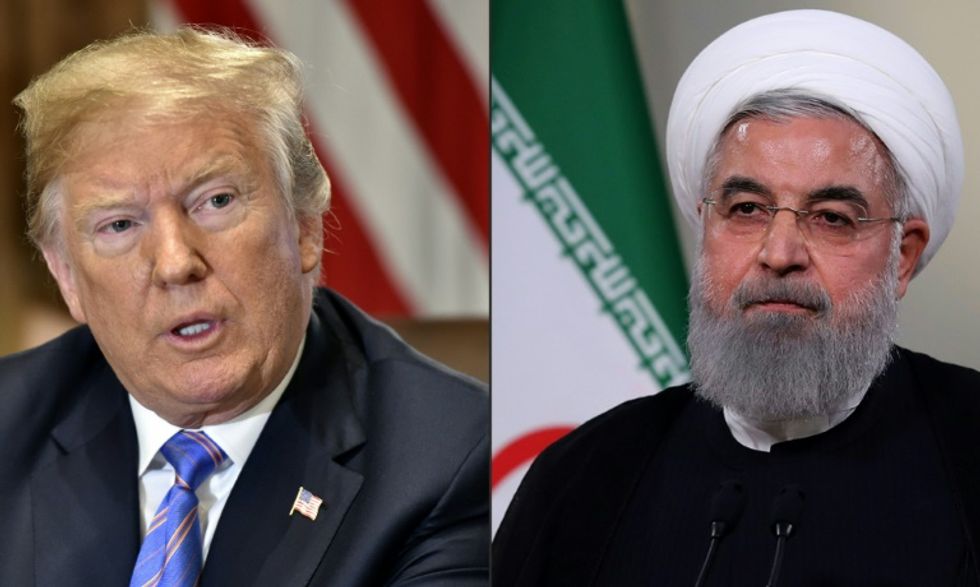 Even though they will be speaking from the same stage, both Donald Trump and Hassan Rouhani have ruled out a meeting on the sidelines of the UN General Assembly AFP/File / Nicholas Kamm, HO

US President Donald Trump is not afraid of surprises but could he take one of the biggest shifts of all in his foreign policy -- easing sanctions on Iran?

Washington is widely skeptical that Trump will shift course on Iran, with his hawkish advisors long pushing a hard line aimed at crippling the clerical regime.

But Trump, who earlier shocked by meeting North Korea's leader, appeared open on Monday as French President Emmanuel Macron proposed a summit in the coming weeks with his Iranian counterpart Hassan Rouhani.

Responding to a suggestion by Macron, the host of a Group of Seven summit in the coastal resort of Biarritz, Trump said that Iran "may need some money to get them over a very rough patch" in the form of a line of credit.

The idea is part of a French-led effort to keep alive a 2015 deal under which Iran drastically scaled back its nuclear work. The accord was negotiated under former president Barack Obama and trashed by Trump.

Barbara Slavin, director of the Future of Iran Initiative at the Atlantic Council, said Macron was likely trying to buy time and keep Iran in the deal -- sending a message as well that Trump could be gone after elections next year.

Iran has played down the possibility of a summit, with Rouhani saying that the United States must first lift all sanctions -- which have badly hurt an economy that had soared following the nuclear agreement.

Slavin doubted Trump would end sanctions -- or that any gesture would lead to a summit, the most likely venue for which would be on the sidelines of the UN General Assembly (UNGA) in New York next month.

"Rouhani wouldn't meet Obama, who negotiated the deal. All Obama managed to get is a phone call with Rouhani; they didn't even get an handshake on the sidelines of UNGA," Slavin said.

"Trump has punished Iran more than any president in American history, for complying with an international agreement! So why would Rouhani reward Trump with this photo-op?" she said.

Unlike with North Korea, where Kim Jong Un has relished the image of standing next to Trump for leader-to-leader talks, the United States has been toxic for Iranian politicians since the 1979 Islamic revolution that toppled the Western-oriented shah.

Any sanctions relief would face heated resistance from aides led by national security advisor John Bolton, who before his appointment advocated attacking Iran and toppling its regime.

The Trump administration, which is closely allied with Iran's rivals Saudi Arabia and Israel, has demanded far-reaching changes from Iran beyond its nuclear program including ending support for groups around the region such as Lebanon's Hezbollah militants and Yemen's Huthi rebels.

Mark Dubowitz, head of the Foundation for the Defense of Democracies, which pushes a hard line on Iran, said the idea of a summit could show that sanctions drove the regime to diplomacy.

But he warned against the credit line proposed by Macron, which reportedly could be worth as much as $15 billion to help stabilize Iran's economy.

"This is a supremely stupid idea. Those who rightly condemned Obama in 2013-2015 for offering premature sanctions relief to the regime in Iran, instead of increasing the pressure, should be all over this," he tweeted.

"Manipulative of Macron to do this and very insincere. #NotWhatFriendsDo," she tweeted.

But Nicholas Burns, a veteran US diplomat who is now a professor at Harvard, said Macron's efforts have at least succeeded in shifting the conversation.

In June, Trump authorized an attack on Iran in retaliation for its downing of a US spy drone, although he abruptly called off the operation.

"Macron is right to try to assist in opening a channel between Washington and Tehran," tweeted Burns.

"That could possibly allow the two to shift the issue away from the use of force to diplomacy."