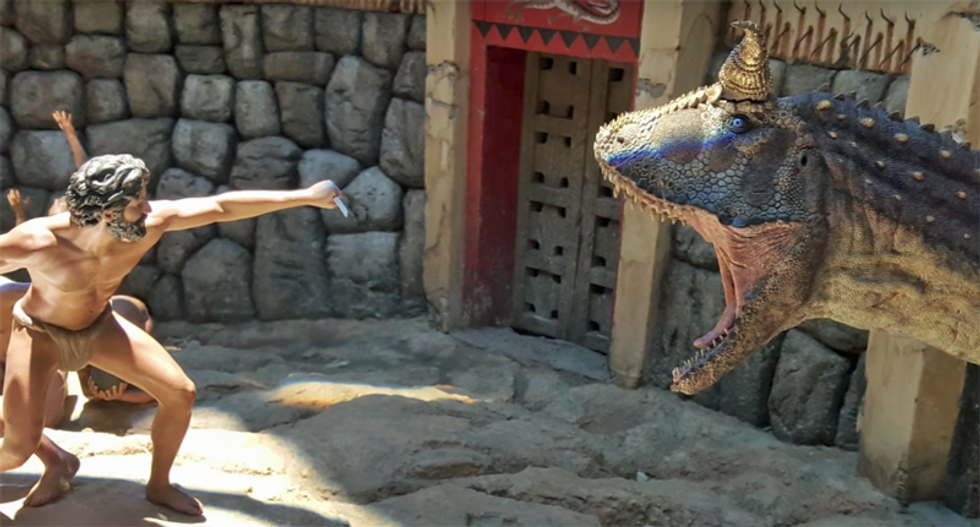 On Saturday, Friendly Atheist reported that the Grant County Board of Education is filing a lawsuit alleging the creationist "Ark Encounter" theme park in Williamstown, Kentucky, received a property valuation way lower than it should have for the purposes of tax assessment.

The museum, which is shaped like a giant replica of Noah's Ark and is full of exhibits explaining supposed historical details of the Flood — including models of cavemen fighting dinosaurs — was assessed at $46 million in 2017. But the Board of Education, combining Ark Encounter's capital investment disclosures, land value, and ticket sales, that the property is actually worth $130 million.

Thus, they contend, the parent company Answers in Genesis evaded $470,288 in property taxes that should have gone to support county schools, in addition to the $275,912 they did pay. And this is on top of the county already exempting them from 75 percent of the property taxes they would have owed.

Ark Encounter has been controversial from the start, not just because it promotes Biblical pseudoscience as fact, or because it discriminates in hiring against non-Christians or LGBTQ people, but because it was built with $18 million in public subsidies. State and local entities provided the funding based on the projection that Ark Encounter would benefit the local community tourism revenue.

Not only has there been a negligible economic benefit to Williamstown from Ark Encounter, but the theme park itself is struggling, with attendance numbers sagging. Last November, Answers in Genesis founder Ken Ham, a well-known creationist activist, attacked the Lexington Herald-Leader for reporting on these dismal numbers, despite the fact that the numbers came from the park itself.