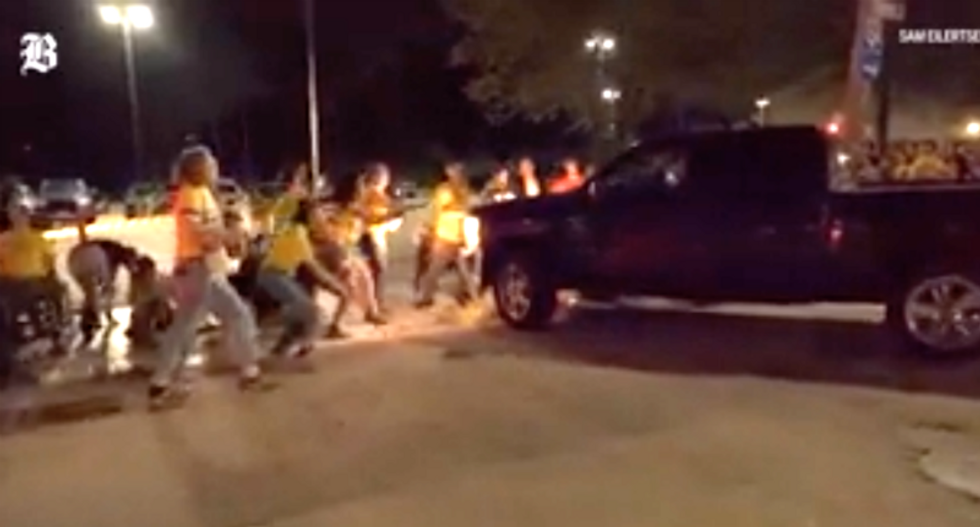 Several protesters were injured after they were assaulted by Immigration and Customs Enforcement detention center worker while exercising their First Amendment rights.

"A captain at a detention center here was placed on leave Thursday after he allegedly drove his pickup truck into a crowd and injured several people who were protesting the prison’s practice of holding detainees for US Immigration and Customs Enforcement," the Boston Globe reported Thursday. "People scrambled and screamed as Captain Thomas Woodworth allegedly honked his horn around 10 p.m. and drove at the group blocking the staff parking lot at the Donald W. Wyatt Detention Center."

"Several people said they were injured when the truck struck them — and when other correctional officers used pepper spray on the protesters to get them away from the vehicle and let the driver out," the newspaper noted. "Five people went to the hospital, including one man who suffered a broken leg and internal injuries, organizers said."

Filmmaker Sam Eilertsen said it was "shocking and horrifying."

“I was panicking and thought, ‘Am I filming the next Heather Heyer moment?’” he said.

Rhode Island Attorney General Peter F. Neronha said that in addition to state police, his office was investigating the attack.

Woodworth was placed on administrative leave.