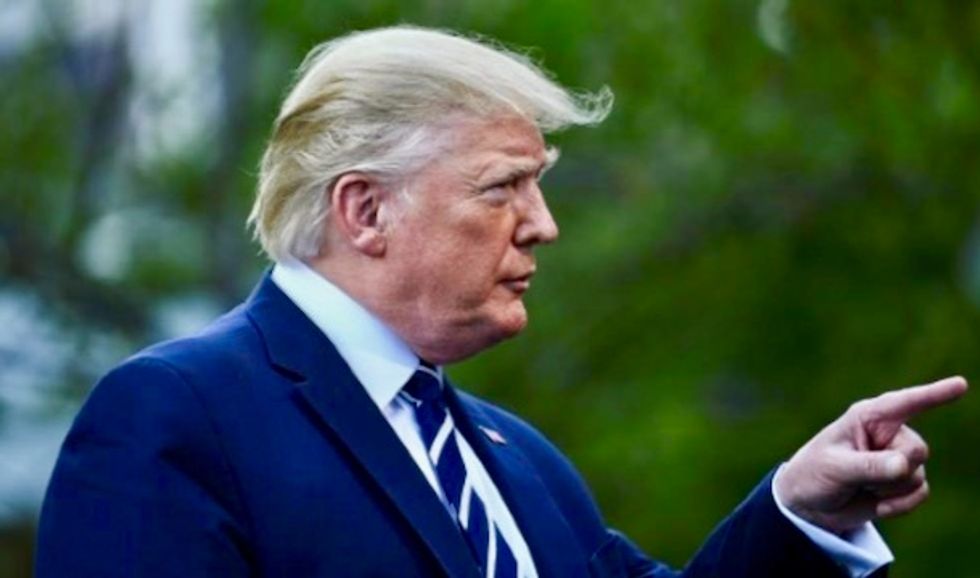 The spending in the traditionally red state is raising questions about whether he's simply shoring up his support — or treating Texas as potentially up for grabs in 2020.

Beginning in June, thousands of voters across the country saw a fundraising plea in the form of a Facebook ad from the president’s official social media page. It described how the “fake news media” would bolster Donald Trump’s reelection bid.

“The Fake News Media broadcasted the 2020 Crazy Dem Debate and showed the American People just how insane the Democratic candidates really are,” it said.

“They’re practically doing our job for us.”

While the rhetoric contained in the ad may not surprise anyone, the people on the receiving end could raise eyebrows. According to Facebook’s ad library, more Texans saw the ad than residents of any other state.

The ad isn’t an anomaly. As Trump’s reelection campaign pours far more money into Facebook advertising than any other 2020 candidate, its No. 1 target is Texas residents. According to Bully Pulpit Interactive, a Democratic firm that tracks digital ad spending, Trump’s campaign spent nearly half a million dollars on Facebook ads in Texas alone from Jan. 5 through Aug. 3. (Texans and Democratic presidential nominees Beto O’Rourke and Julián Castro, meanwhile, spent less than $300,000 combined in the same period.)

But the spending has split pundits along party lines: While Democrats take it as a sign that Trump might be worried Texas will flip, Republicans say it only means the president is trying to reenergize his base early on.

“When we think about digital ads, we think about it in terms of, ‘Is [Trump] using them to engage and excite his existing supporters, or is he using it to reach out and persuade new supporters?’” said Daniel Scarvalone, Bully Pulpit’s senior director of research and data.

For years now, the president has used Facebook prolifically. After the 2016 election, Trump’s digital director, Texan Brad Parscale, told CBS’ “60 Minutes” that the campaign spent most of its digital advertising dollars on Facebook and that it tested between 50,000 and 100,000 ad variations each day to target potential voters.

The Trump campaign didn’t respond to requests for comment explaining the campaign’s digital strategy ahead of next year, but Parscale previously credited the popular social media platform for Trump’s presidential win in 2016.

“Twitter is how [Trump] talked to the people,” Parscale said. “Facebook was going to be how he won.”

Trump’s digital strategy is not unique to his campaign. For years, political campaigns and outside groups have run ads on Facebook to sway voters ahead of Election Day. (For example, O’Rourke was the top political advertiser in the country on the site for much of last year during his heated Senate race against incumbent Republican Ted Cruz, spending more than $6.3 million on Facebook ads from May through late October.)

And Facebook might play an even bigger role ahead of 2020 compared to previous cycles. Democrats have been driven in part by the requirements of broad support from small-dollar donors in order to qualify for debates; Trump, meanwhile, is using it to raise money and collect a hefty list of donors by next year.

“Facebook is well established for preaching to the converted,” said Nicco Mele, the director of Harvard University’s Shorenstein Center on Media, Politics and Public Policy. “It’s very good at reaching your base.

“I am certain traditional TV advertising is still useful, but it’s a lot less useful than it was 20 years ago. And it’s clear that a lot is happening online.”

Trump seems to have received that message and is doubling down on the digital strategy that helped him win the presidency nearly four years ago. Last month, his campaign announced it had raised more money online in the second quarter of this year than in the first half of 2018. And his spending on Facebook so far has also exceeded that of all of his Democratic rivals combined.

“The truth about Texas is that it has abysmal voter turnout,” said Sam Martin, an assistant professor at Southern Methodist University. “If voters of color turned out to vote and could be engaged to vote, Trump would probably have reason to worry about Texas.”

Aside from the “fake news” ad, data from Facebook shows that the president’s reelection campaign is also sending more ads on topics like immigration and socialism to Texans’ news feeds than to people in any other state.

“Democrats are TOTALLY out of touch with the American people,” read one ad that began running in July but is now inactive. “We need to send a RESOUNDING message to the left that big-government socialists like Alexandria Ocasio-Cortez and Ilhan Omar don’t represent the views of the American people!”

“It’s CRITICAL that we STOP THE INVASION. Nancy Pelosi and Democrats have not negotiated in good faith to fund a wall at our Southern Border, proving that OBSTRUCTION is far more important to them than YOUR SAFETY,” another ad read. “I cannot allow America’s safety and security to be put at risk any longer. We need the wall.”

His immigration ads have received heightened scrutiny in light of a recent massacre in El Paso in which the shooter allegedly penned a hate-filled manifesto warning of a “Hispanic invasion of Texas,” along with other racist and xenophobic language. The messages continue a campaign tactic the president has employed since he first launched his 2016 campaign: using alarming rhetoric surrounding immigration to signal that there’s a crisis at the border that needs to be addressed immediately — and then suggesting he’s best equipped to handle it.

Trump’s ads in Texas could prove influential given the state’s voting record the past two election cycles. The Senate race between O’Rourke and Cruz last year was the closest statewide race in Texas in 40 years. In 2016, Trump carried the state by only 9 percentage points — the smallest margin of victory for a Republican presidential nominee in Texas in two decades.

Others aren’t so sure.

“You want to fish in the pond with the most fish,” said Eric Wilson, a Republican digital strategist. “The fact the Trump campaign is spending so much in Texas is a reflection of how much support he has in the state.”

And, Wilson noted, most of the ads targeted to a Texas audience have a clear purpose: building lists and collecting phone numbers, emails and, eventually, dollars.

“They wouldn’t be spending there if it were not performing well for them,” Wilson said, adding that Trump’s spending on digital ads in Texas shows that the campaign is trying to build up its infrastructure and rile up his core supporters early on, which is why nearly half of Trump’s overall Facebook ad budget is targeting users who are over 65 years old.

One other possible explanation for Trump’s heavy spending here: Texas is simply one of the biggest states — so there are more voters to reach. Traditional swing states Ohio, Pennsylvania and Florida are also among the top five locations where Trump is spending money. But so is California, the most populous state and one that no one thinks will be competitive in 2020.

“There’s the big open question of: Do Republicans have Texas locked down, or do they really have to worry about it?” Scarvalone said. “In the months ahead, as Trump continues to use Texas as his cash register, we’ll see whether he’s using it to mobilize existing donors and supporters, or if he’s using Facebook to push his vote share in the state.”

Disclosure: Facebook and Southern Methodist University have been financial supporters of The Texas Tribune, a nonprofit, nonpartisan news organization that is funded in part by donations from members, foundations and corporate sponsors. Financial supporters play no role in the Tribune's journalism. Find a complete list of them here.