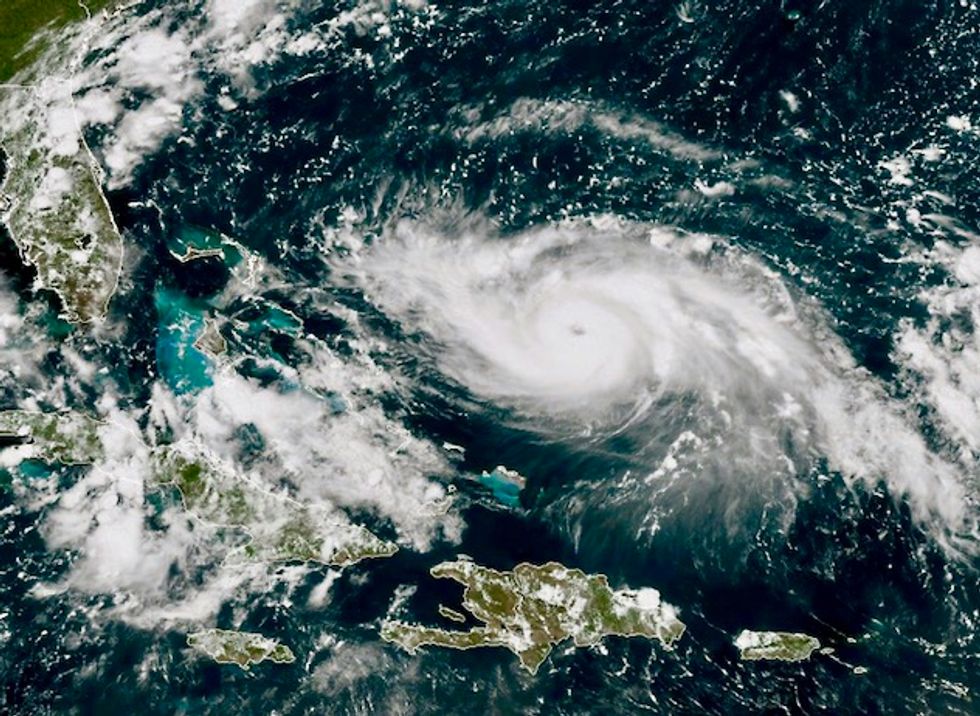 A satellite image of Dorian as the storm approached the Bahamas and Florida at 1740 GMT on August 30, 2019 NOAA/RAMMB/AFP / HO

Hurricane Dorian strengthened into a major hurricane on Friday as it churned across the Atlantic Ocean on a collision course with the east coast of the US state of Florida.

The Miami-based National Hurricane Center (NHC) said Dorian, which is expected to make landfall in Florida on Monday or Tuesday, had gone from a Category 2 to a Category 3 storm on the five-level scale.

As of 2:00 pm (1800 GMT), Dorian has become an "extremely dangerous hurricane" packing maximum winds of 115 miles (185 kilometers) per hour, the NHC said, and it is projected to intensify even further.

Dorian was moving in a northwest direction at 10 mph (17 kph), the NHC said.

GETTY IMAGES/AFP / JOE RAEDLE Workers place shutters over a window as they prepare for the possible arrival of Hurricane Dorian in Miami Beach, Florida

It said hurricane conditions were expected in the northwestern Bahamas by Sunday and the islands should prepare for life-threatening storm surge that could raise water levels by as much as 10 to 15 feet (three to 4.5 meters) above normal tide levels.

Heavy rainfall could cause flash floods, the NHC warned.

Florida residents were stocking up on food, water and other supplies on Friday and battening down their homes to ride out the storm while others were preparing to evacuate.

Weather forecasters said Dorian could strengthen into a powerful Category 4 storm before it makes landfall but there was a great amount of uncertainty about where it would hit.

Florida Governor Ron DeSantis issued a declaration of emergency for all of the state's 67 counties and urged its millions of residents to make preparations for what he said could be a "major event."

GETTY IMAGES/AFP / GERARDO MORA Jordan Haywood fills a gas can in preparation for the arrival of Hurricane Dorian in Winter Springs, Florida

"We're anticipating a massive amount of flooding," DeSantis said. "We urge all Floridians to have seven days' worth of food, medicine, and water."

But the governor said local authorities were holding off on ordering evacuations until weather forecasters had a better picture of the eventual path of the hurricane.

"If you're in an evacuation zone and you're ordered to evacuate, please do so," DeSantis said.

The Florida National Guard said about 2,000 service members had been mobilized so far and another 2,000 would be on Saturday.

President Donald Trump, whose Mar-a-Lago golf club is located in Palm Beach, said that Dorian was "looking like it could be an absolute monster" and cancelled a trip to Poland to stay behind and focus on preparations for the storm.

"All indications are it's going to hit very hard," Trump said in a video.

"Some people said bigger or at least as big as Andrew," a Category 5 storm which left 65 people dead in 1992, he said.

Georgia -- another southeastern state that could be in the storm's path -- has declared a state of emergency for 12 counties.

Governor Brian Kemp said the hurricane "has the potential to produce catastrophic impacts to citizens" throughout the southeast coastal region of the United States.

Miami's Ocean Drive, a normally vibrant strip along the beach, was quiet, with some empty tables and fewer tourists than usual.

There were lines at some gasoline stations as drivers filled up their tanks and gas cans.

A number of schools announced that classes would be cancelled until at least Tuesday.

One shopper, Magdalena Gomez, 57, from Argentina, was preparing for her first hurricane.

A Rolling Stones concert in Miami originally scheduled for Saturday night was moved up by a day due to the weather forecast, the band said on its Twitter account.