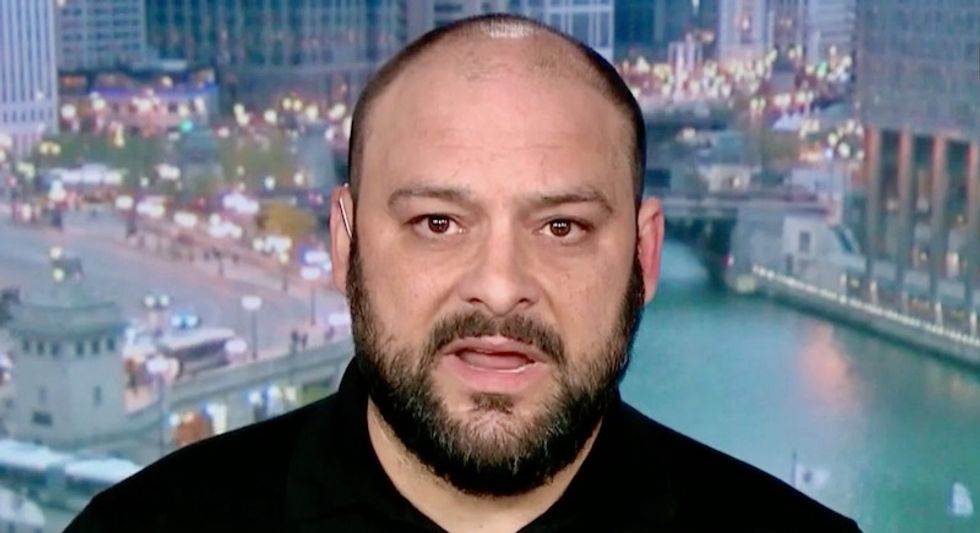 Former white supremacist Christian Picciolini noted in an interview with MSNBC Sunday that the United States is dealing with a severe domestic terrorism problem, but that the Donald Trump administration is asleep at the wheel.

Since the El Paso shooting, there have been more than 30 thwarted mass shootings and at least two of those were directly related to domestic terrorism. Luckily state and local police were able to step in, and Americans have been more likely to warn law enforcement about possible attacks.

That said, Picciolini explained that there's no one coming to save America from President Donald Trump's government.

"I think the first thing that we need to do, and it's very important, is that we need to call it by its name," he told host Kasie Hunt. "We have a domestic extremism problem in our country. There isn't anybody focussed on it in the government. Programs have been defunded over the last several years for a few radicalization programs and even programs focussed on the far right. So, the first step is we need to ensure there is a mechanism in place to be able to investigate these crimes."

Picciolini has a new special on MSNBC called "Breaking Hate" where he works with former neo-Nazis or white supremacists who have a realization and want to get out of the respective groups.

"I have to tell you there are days, almost every week, where I feel like my inbox is a risk assessment for Homeland Security and they're better suited for it than me," Picciolini revealed. "And the problem is that we are creating an environment where more of these attacks are happening, partly because of the internet, but also because we are not taking the steps to make sure this doesn't exist in our society."

Picciolini explained that the problem isn't a new one; it extends far back before the founding of the United States.

"I think we have to remember that this is a problem that we've had in our country for 400 years," he said. "In 1619, in 1919, in my city, Chicago, during the red summer, and now in 2019 we still have this problem. And there will be a continuous line of people for me to help disengage from extremist movements unless we change the institutional and systemic racism we're seeing."

Neera Tanden, who worked in President Barack Obama's administration, explained that there were many state and federal programs that are funded to keep an eye on white nationalism and help stop possible domestic terrorist attacks. Some of those programs have been defunded by the Trump administration.