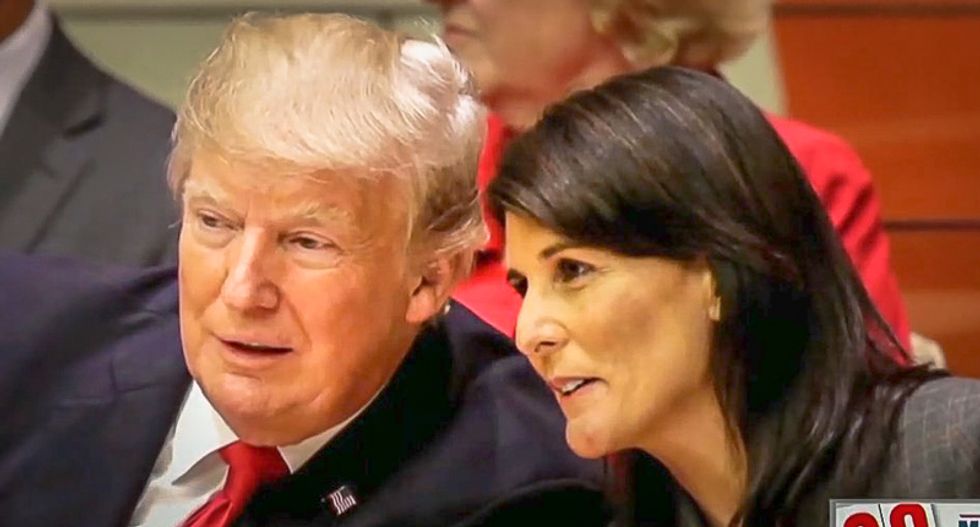 President Donald Trump became the butt of jokes all over the world this week when he offered to purchase Greenland and angrily canceled a visit to Denmark after Danish Prime Minister Mette Frederiksen described the proposal as “absurd.” The headlines, Maggie Haberman and Peter Baker note in a report for the New York Times, sounded like something The Onion would make up — only it really happened. But Haberman and Baker stress that to former Trump Administration officials, the president’s erratic behavior is no laughing matter. And those who have worked with the president, according to Haberman and Baker, are growing increasingly worried about his actions — especially with the 2020 election only 15 months away and the U.S. economy possibly going into a recession.

“Some former Trump Administration officials in recent days said they were increasingly worried about the president’s behavior, suggesting it stems from rising pressure on Mr. Trump as the economy seems more worrisome and next year’s election approaches,” Haberman and Baker report. And the current makeup of the Trump Administration, they go on to say, only makes matters worse: at this point, according to the Times reporters, Trump has too many sycophants and not nearly enough constructive criticism.

“After casting off advisers who displeased him at a record rate in his first two and a half years in office,” Haberman and Baker explain, “Mr. Trump now has fewer aides around him willing or able to challenge him — much less restrain his more impulsive instincts.”

The Greenland/Denmark debacle, according to Haberman and Baker, is only one recent example of the type of bizarre and outrageous things that have former Trump Administration officials worried. Recently, Trump has accused American Jews who vote for Democrats of showing “great disloyalty” to Israel — and Trump said that Jews in Israel adore him as though he were the “King of Israel” or “the second coming of God.” Discussing the trade war with China, Trump declared, “I am the chosen one” as if to tell his evangelical supporters that God Himself picked him specifically to lead a trade war.

Last week at a rally, Haberman and Baker recall, Trump mocked a man he thought was a protestor for being overweight. But the man he was mocking was actually a Trump supporter, not a protestor.

One of the problems with Trump sycophants in the GOP, according to Haberman and Baker, is their tendency to encourage his absurdities. One such GOP sycophant is Wisconsin Rep. Mike Gallagher, who said of Trump’s ridiculous offer to buy Greenland, “The United States has a compelling strategic interest in Greenland, and this should absolutely be on the table.”

The more Trump says and does outlandish things, according to Haberman and Baker, the more worried GOP insiders become about the possible effect on the 2020 election.

“With a growing schedule of campaign rallies,” the Times reporters write, “he will be talking in public even more in the coming months — each time a chance to say something provocative that may distract from the messages his staff would prefer to emphasize.”

Tiger Woods is recovering and in "good spirits" after a second day of treatment at Cedars-Sinai Medical Center following his horrific rollover solo car smash that left him with serious leg injuries.

The golf superstar was transferred to Cedars-Sinai on Wednesday night after undergoing emergency surgery the day before at Harbor-UCLA Medical Center to repair compound fractures sustained in each leg in addition to a shattered ankle.

A US panel on Friday recommended Johnson & Johnson's one-dose Covid-19 shot for emergency approval, as some of the world's most powerful countries issued a unified call for better vaccine access for poorer nations.

The United States is the world's hardest-hit country, and its emergency use authorization -- which is now expected shortly -- of the J&J vaccine would follow those for the Pfizer and Moderna doses.

Appearing on MSNBC early Saturday morning, former Rep. Joe Walsh (R-IL) ripped into former colleagues speaking at Conservative Political Action Conference in Florida, noting that they -- and the attendees -- are there to pledge their allegiance to former President Donald Trump and not the Republican Party he once belonged to.