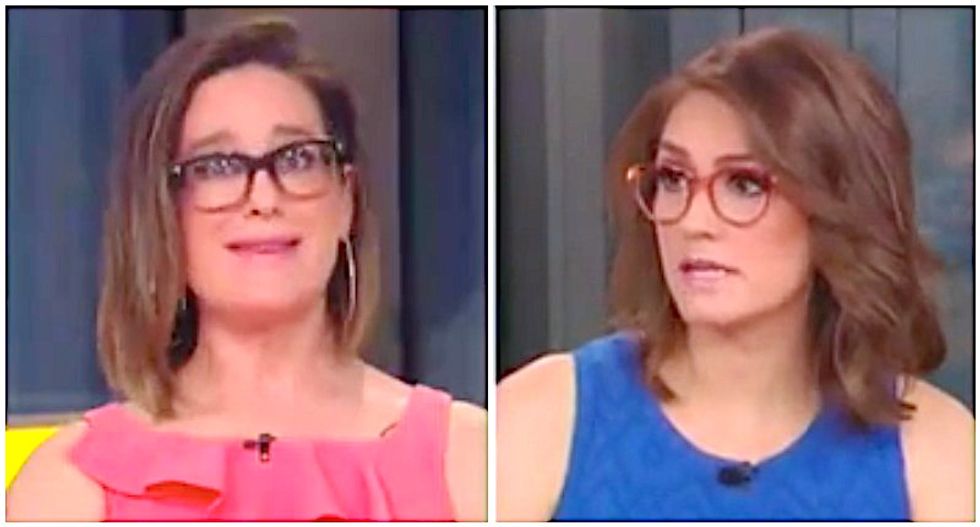 A Fox News contributor patiently explained to her colleagues how President Donald Trump had openly encouraged violence against his rivals, and showed there was no comparison to rhetoric from the other side.

The president is visiting Dayton and El Paso, where 30 people were killed and dozens more wounded in a pair of mass shootings, and panelists on "Outnumbered" largely agreed that Trump was unfairly blamed as a motivating factor.

"He said everyone from white supremacy to Antifa, there is no place for hate groups," said former Rep. Jason Chaffetz, a Fox News contributor. "The president, I think, said the right thing, and I think he meant the right thing. But some of these others won’t let him out of that box."

But contributor Jessica Tarlov pointed to the similarities between Trump's language and a manifesto allegedly written by the El Paso gunman, and she said the president and his allies were off base suggesting the Dayton gunman was inspired by Democratic candidates he supported.

"It’s incredibly unfair when people say, 'Oh, he was as Elizabeth Warren supporter," Tarlov said. "Elizabeth Warren has never called anyone to be violent. She's never said, 'Show up at your neighborhood Goldman Sachs and wield a weapon and go after the bankers.'”

Chaffetz complained that Trump had never done that, and host Lisa Kennedy pointed out that Rep. Ilhan Omar (D-MN) had retweeted a Tom Arnold post mocking Sen. Rand Paul (R-KY) for being viciously attacked by his neighbor.

"The president had a rally where he said, talking about illegal immigrants, 'What are we going to do about this?'" Tarlov said. "Somebody yelled, 'Shoot them,' and he said, 'That only happens in the panhandle.' When he was running for president, he said he would pay the legal fees for people who beat up protesters."

Kennedy insisted that Trump was only joking, and then insisted the president did not motivate his supporters to commit violence.

"People are hyper-politicized and it doesn’t mean because you are passionate about an issue or a candidate that you are going to act violently because of that," Kennedy said. "Or because you go to the president’s rally, that somehow you are propagandized and now one step closer to a murderous act."

"What about the pipe bomber, then?" Tarlov fired back. "I'm can really curious. His lawyer, in court, his defense was he became indoctrinated by what he saw on television."

Kennedy waved the issue away by blaming the string of politically motivated killings and threats on mental illness.

"Well, there are mentally ill people who unfortunately engage in heinous acts like that," she said.