Iowa's Steve King facing ouster because his campaign is broke and his allies have fled: report 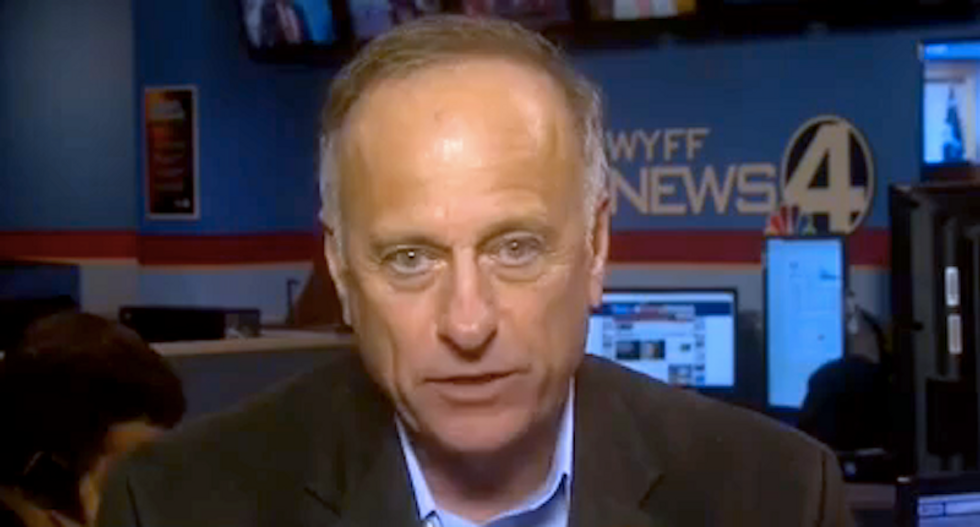 Iowa Republican Steve King is facing losing his seat representing his district in the U.S. House of Representatives as his campaign finds itself broke and the Republican Party has turned its back on him after his latest round of controversial comments.

According to a report from the Daily Beast, his campaign is struggling to bring donors -- who once wholeheartedly supported him --back into the fold.

Even worse, his colleagues in Congress have also abandoned him.

"King has not received a single contribution this year from a political action committee associated with a sitting member of Congress. Corporate PACs and interest groups have also completely shunned him," the Beast reports. "Through the first six months of the year, King received just two contributions from third party political entities: $2,000 donations from PACs associated with two former members of Congress, Lamar Smith (R-TX) and the infamous Todd Akin (R-MO)."

What caused the sea change in support for King, long noted for his white extremist rhetoric, was a recent question-and-answer session in Iowa where he expressed support for rape and incest as a way of propagating white populations.

As the Beast reports, King is now facing a strong primary challenge with little money on hand to fight back.

"Those comments have made King a pariah in the party—with House Republican leaders stripping him of his committee assignments—King has refused to leave office," the report states. "Now, as he faces the toughest campaign since he was first elected in 2002, he is doing so with a potentially catastrophic lack of resources. The $18,365 that King’s campaign had in the bank at the end of June was the least cash on hand he’s ever reported after the first six months of a cycle."

"King’s top industry donors throughout his career, according to an analysis of Federal Election Commission records, were the American Bankers Association, the National Association of Homebuilders, AT&T, Crystal Sugars, and the Rain and Hail Insurance Society. All of them last donated to King during the 2018 election cycle but have so far declined to do so in this cycle," the report continues while pointing out that some of those same donors are now funding his GOP challengers.

The Beast reports that King should not expect any help from his party which has already shunned him when not criticizing his latest comments.

"Contributions from Republican Party organizations have also evaporated completely. King never relied too heavily on such donations—he generally received about $5,000 per cycle from GOP committees, with the most, about $32,000, coming during the 2010 cycle. But it appears he’ll be fighting for re-election next year without any financial assistance from his party, which is raising record sums this year," the report states.