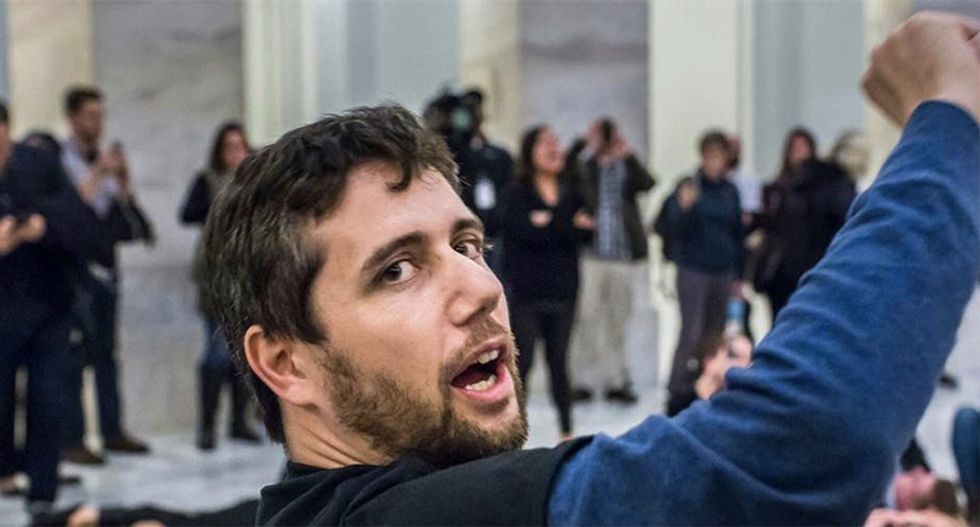 Healthcare activist Andy Barkan, who has terminal ALS, will testify before federal lawmakers at a hearing on Medicare for All next Tuesday. (Photo: Ady Barkan/Facebook)

"We want ABC and Univision to put healthcare front and center."

Citing his firsthand experience with "the dysfunction of our healthcare system," dying activist Ady Barkan—an outspoken backer of Medicare for All—on Friday urged supporters to join him in demanding the next Democratic presidential primary debate to be focused on the nation's healthcare crisis.

"American voters deserve a better debate on healthcare," Barkan, who has ALS, wrote in an email. "The media must do better, and the next debate is on ABC and Univision next month. So today," he continued, "we're starting a petition to demand the substantive debate we deserve."

Said petition, sponsored by Barkan's progressive Be a Hero organization, is roughly 4,000 signatures short of its 51,200 goal as of this writing.

"Throughout the Democratic debate, moderators cut off candidates, asked bad questions, and did not do justice to the very real stakes of healthcare for Americans like Ady," the document reads. "Sign our petition to ABC and Univision demanding that the next Democratic primary debate cover our American healthcare stories."

As Common Dreams reported last month, the healthcare segment at the second Democratic debates last month "was largely driven by a question that progressives said disingenuously framed Medicare for All as a tax increase on the middle class, rather than a cost-saving overhaul of the nation's broken healthcare system." The commercial breaks were also filled with anti-single payer messages from the pharmaceutical and insurance industries.

"We want ABC and Univision to put healthcare front and center," wrote 35-year-old Barkan. "We need them to elevate the stories of Americans who have experienced our unjust healthcare system firsthand."

Following the debates last month, Barkan tweeted:My ALS has progressed to the point where I now need full-time care, and it costs our family $9,000 per month. My family needed #MedicareForAll yesterday.

National Nurses United, one of the co-sponsors of the petition, also drew attention to the demand to ABC and Univision this week.

In an email call to action, Jasmine Ruddy, an organizer with the Nurses' Campaign to Win Medicare for All, gave an overview of the crisis.

"We live in a nation where more than 28 million Americans are uninsured; countless families are forced into crippling debt in order to receive life-saving care; and pharmaceutical executives can afford to buy yachts with helipads," she wrote.

Ruddy also noted the widespread Democratic support that Medicare for All legislation boasts. A House version was introduced by Rep. Pramila Jayapal (D-Wash.) and a Senate version by Bernie Sanders of Vermont.

"Medicare for All has 118 cosponsors in the House, and is supported by 85 percent of all Democratic voters," wrote Ruddy. "Constantly interrupting candidates and confining them to 30 seconds doesn't do justice to the very real stakes of this fight."

Those stakes are painfully clear to Barkan and his family, who've launched a GoFundMe page to help pay his $9,000 out-of- pocket in monthly healthcare expenses.

He shared his healthcare story—and criticism of the current "absurd" healthcare system—with lawmakers earlier this year during the first-ever congressional hearing on Medicare for All.

"Three years ago, Rachael and I felt like we had reached the mountaintop," he told the House Rules Committee in April. "We had fulfilling careers, a wonderful community of friends and family, and a smiling, chubby infant boy. We could see decades of happiness stretching out before us. The sun was shining and there was not a cloud in sight."

"And then, out of the clear blue sky," he continued, "we were struck by lightning."

"ALS. A mysterious neurological disease with no cure and no good treatment. A life expectancy of three to four years," said Barkan.

"Every month since my diagnosis, my motor neurons have died out, my muscles have disintegrated, and I have become increasingly paralyzed," said Barkan. "I am speaking to you through this computer because my diaphragm and tongue are simply not up to the task."

But "all of us need medical care," he added, noting that the current system is replete with "high costs, bad outcomes, mind-boggling bureaucracy, racial disparities, bankruptcies, geographic inequities, and obscene profiteering."

"The ugly truth is this: healthcare is not treated as a human right in the United States of America. This fact is outrageous," said Barkan. "And it is far past time that we change it."

To remedy those problems, Barkan told lawmakers, Medicare for All is "the right solution, the only solution, to what ails the American healthcare system."