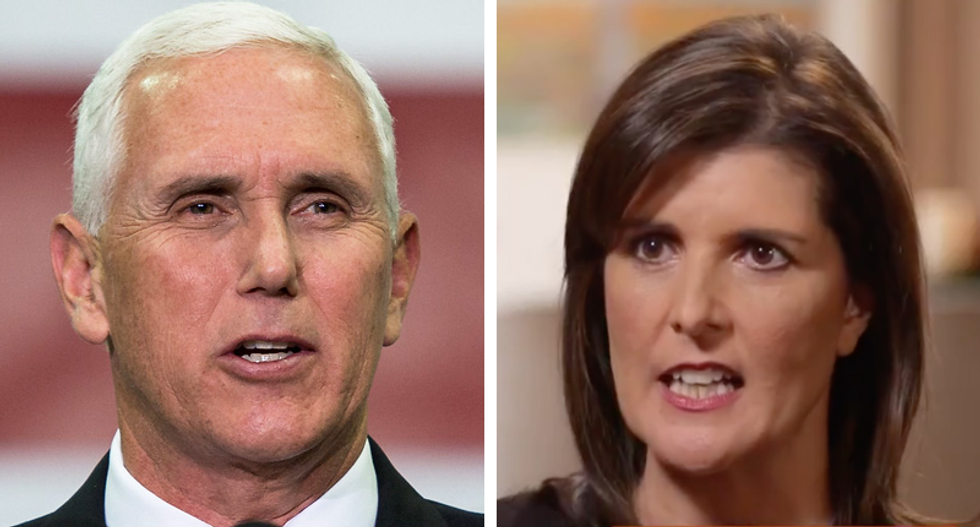 Who will be President Donald Trump's successor as leader of the Republican Party?

It's a question that GOP officials are already asking themselves, and it is already producing subtle divides within their ranks. Two of the biggest names that get floated are Vice President Mike Pence and former U.N. Ambassador Nikki Haley. Both politicians are comfortable appealing to multiple wings of the GOP, and both have managed to stay in Trump's good graces for far longer than most of the people who have worked in his administration.

They have pushed back aggressively on claims that they are challenging one another for control, with Haley aggressively denying rumors that Trump was interested in swapping her in to replace Pence on the 2020 ticket.

But behind closed doors, a rivalry is beginning to bloom. According to Politico, the two politicians competed with one another for attention at a GOP retreat for wealthy donors in Aspen, Colorado.

According to the report, "The assembled group of governors, high-dollar donors, and operatives were well aware that the two have big ambitions; to some it seemed as if Pence and Haley, who spoke on back-to-back days, were vying for their attention. Some in the audience found themselves parsing and comparing the two speeches and buzzed they were getting a sneak preview of a 2024 Republican primary. Others recalled something peculiar: Neither Pence nor Haley acknowledged each other in their presentations, even though they gave shout-outs to others attending the retreat."

It is hard to say who will become the GOP's standard bearer when Trump is gone. But already, it is clear that battle lines are being drawn for that day.