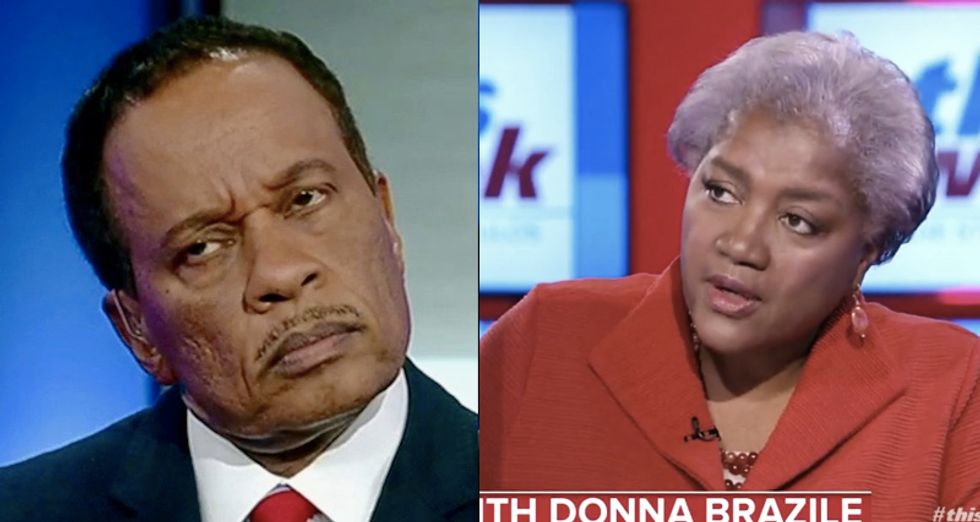 Democratic strategist Joel Payne called out President Donald Trump Sunday for his attacks on Fox News when he was leaving New Jersey.

Before Trump landed in Marine One at Morristown, New Jersey, he tweeted an attack on Juan Williams, the only Black pundit on the Fox News show "The Five."

Trump briefly addressed Williams, before he told members of the press that he found it appalling Fox News hired a friend of Hillary Clinton's, whose name he couldn't even remember.

"And the wonderful woman that gave Hillary Clinton the questions," Trump said of Donna Brazile. "That was a terrible thing. All of a sudden, she's working for Fox. What's she doing working for Fox? Fox has changed, and my worst polls have always been from Fox. There's something going on at Fox, I'll tell you right now, and I'm not happy with it."

He then turned again to attack Williams.

Payne noted that they are two of very few people of color on the network. Out of all of the voices who call him out him regularly like, Shep Smith or Chris Wallace, Trump went after the Black ones.

"We're three black men sitting here, and we watched this, and I heard that ad hominem attack on Juan Williams and Donna Brazile who I'm telling you--" Payne said before being cut off briefly by MSNBC host Al Sharpton.

"He couldn't even remember her name!" Sharpton noted.

"He couldn't even remember her name," Payne agreed. "I tweeted about it, and it's just very interesting to me that he found the two notable African-Americans at Fox News to call out because that's where he goes. That's who he is. That's the core of who Donald Trump is."