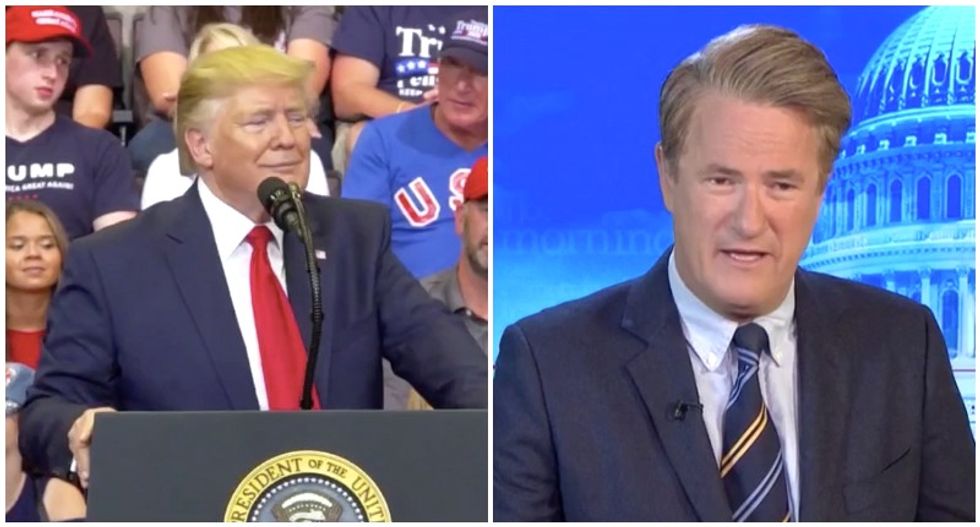 MSNBC's Joe Scarborough warned that President Donald Trump was moving to a new "autocrat-in-waiting pose" after his rally in Cincinnati.

The president did not provoke any racist chants at the Ohio rally, but he lashed out at the city's Democratic mayor John Cranley after protesters repeatedly interrupted his remarks.

White House staffers feared another racist outburst from the president or his supporters, but instead Trump walked right up to the edge but stopped short of another news-dominating meltdown.

"It's the kind of tension that Trump loves," said co-host Mika Brzezinski. "Just going right to the edge."

Trump went on an extended rant against Democratic-led cities, singling out Los Angeles, San Francisco and Baltimore, comparing them to the Central American countries whose refugees he demonizes in speeches and torments at the border.

"You know, there were a lot of protests, Trump was sort of walking across the stage, sniffing, you know how he does, breathing it all in," Scarborough said. "He's actually amping up his on-stage performances."

The effect reminded Scarborough of the "Fat Bastard" character played by Mike Meyers character in his "Austin Powers" movies.

"He reminded me at times of the 'Fat Bastard,' it's a character, it's a character in 'Austin Powers,' and he's sniffing and looking around -- 'thank you, thank you,'" Scarborough said. "I thought he was going to say, 'get into my stomach,' at one point. He's just really starting to take on this role of 'Dear Leader.' You can see it last night more than usual. He's amping it up, he's amping his audiences up, amping up the racial attacks and the demagoguery."

"He's a force, and the only way the Democrats are going to beat him is with an equal force," he added.