Noam Chomsky: The United States is committing 'a form of criminality with literally no historical antecedent' 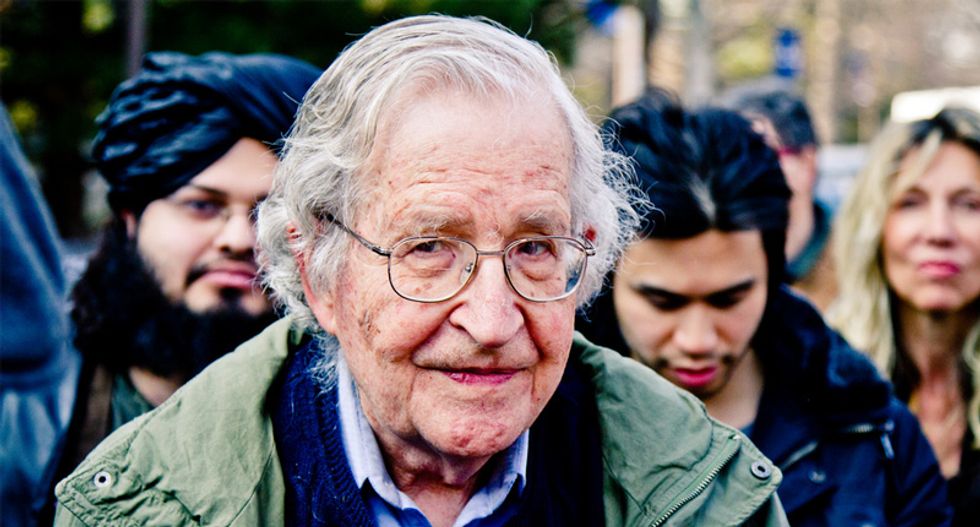 In a new interview with MIT Press, famed linguist and political thinker Noam Chomsky offered brief thoughts on the dangers our society faces.

"A very broad question, but perhaps one that speaks to the times we’re living in right now: What do you regard these days as a cause for optimism?" asked MIT Press Director Amy Brand of the 90-year-old.

Despite the question, Chomsky focused more on what troubled him about the present than what gives him optimism.

He noted that these times are "extremely dangerous," perhaps "more so than ever before in human history." He noted that history could essentially come to an end if we don't address the threats posed by nuclear weapons and "environmental catastrophe."

So how should these challenges be addressed?

"That requires reversing the course of the U.S. in dismantling arms control agreements and proceeding — along with Russia — to develop ever more lethal and destabilizing weapons systems; and in not only refusing to join the world in trying to do something about the severe environmental crisis but even aggressively seeking to escalate the threat, a form of criminality with literally no historical antecedent," he said.

Unfortunately, both those prospects look particularly dismal at the moment. The United States' trade war with China is emblematic of its failure to come together in an aggressive way to address climate change, especially after President Donald Trump pulled out of the Paris Climate Accord. And National Security Adviser John Bolton has been successfully pushing for the United States to pull out of arms control agreements and it is now believed that Russia is working on building nuclear-powered cruise missiles — to disastrous effect. At least until Trump is out of office — and perhaps not even then — it's difficult to see how the United States will get its act together regarding these global threats.

"Not easy," Chomsky said of reversing course, "but it can be done."

He continued: "There have been other severe crises in human history, even if not on this scale. I’m old enough to remember the days when it seemed that the spread of fascism was inexorable — and I’m not referring to what is referred to as fascism today but something incomparably more awful. But it was overcome."

What does encourage him, Chomsky said, is that he sees "very impressive forms of activism and engagement taking place, mainly among younger people. That’s very heartening."

"In the final analysis, we always have two choices: We can choose to descend into pessimism and apathy, assuming that nothing can be done, and helping to ensure that the worst will happen. Or we can grasp the opportunities that exist — and they do — and pursue them to the extent that we can, thus helping to contribute to a better world," he concluded. "Not a very hard choice."

You can read the full interview — mostly discussing Chomsky's work in linguistics — here.